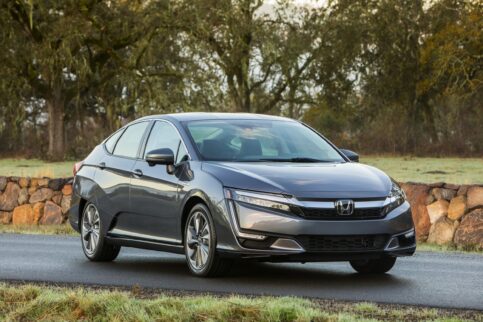 Honda introduced the Clarity in 2018 as its first plug-in hybrid electric vehicle (PHEV), and in the intervening three years, not much has changed—either with the Clarity itself or the state of the PHEV marketplace.

These days, most of the action is happening in the market for pure EVs, which are becoming more affordable as driving range improves.

The PHEV segment is not entirely stagnant, though. Newcomers since the Clarity’s 2018 arrival include plug-in hybrid versions of the Ford Escape, Hyundai Santa Fe and Toyota RAV4 SUVs. The Mitsubishi Outlander PHEV crossover will carry on as-is until its second generation arrives in Canada in 2022. The Hyundai Ioniq and Kia Niro still offer plug-in options, and Toyota’s Prius Prime is a plug-in version of that vaunted hybrid model.

But rather than stay in the plug-in game, Honda is discontinuing the Clarity – its only plug-in car – after 2021. Once the Clarity disappears, Honda’s Canadian loyalists will have to wait until 2024 for the brand’s next plug-in model, an all-electric crossover called the Prologue. (Honda sold a battery-only Clarity in the U.S., but never offered it here.)

Given its impending demise, Honda has not made any significant changes to the Clarity since 2018: This mid-size sedan promises 77 km of all-electric driving from its 17-kWh battery before it switches to gas-electric hybrid power. However, Honda has steadily increased the price, so that the base model now goes for $44,505 – a significant bump from the 2018 model’s $39,900 MSRP.

The Honda Clarity favours its front-seat occupants: The seats are roomy, comfortable and supportive. I was surprised my top-end Touring test car didn’t have a sunroof, but that left plenty of headroom. Rear-seat passengers will find good legroom, but headroom is tight thanks to the way the roof tapers rearward.

Honda says the trunk offers 439L of cargo volume, but the space is an odd shape. And while the rear seats fold, they don’t go flat, and the opening between the trunk and passenger compartment is not large. Most of the Clarity’s PHEV competitors have a dual advantage in that their crossover designs are both trendier and more practical.

Honda estimates the Clarity’s energy consumption at 2.1 Le/100 km on battery power and, in gas-electric hybrid driving, 5.3/5.9 L/100 km (city/highway). Those figures are competitive with PHEV versions of the Ford Escape and Toyota RAV4, but the Toyota Prius Prime and Hyundai Ioniq PHEV promise more efficient use of both electricity and gas.

I drove half my week in the Clarity on electricity and used it as a hybrid the rest of the time, which resulted in a fuel consumption average of 1.8 L/100 km. However, had I charged the car every night, the Clarity’s promised electric range would have been more than enough for my daily driving needs and I wouldn’t have burned any gasoline at all.

One of the main benefits of a PHEV is that its gas engine makes it better suited to long-distance drives than a pure electric. In the Clarity’s case, its 26.5L gas tank gives the car 450 km of gas-electric range (based on the 5.9 L/100 km highway rating), which swells to 525 km if you start every drive with a full charge of the battery.

Here’s some food for thought: In 2019, I drove an 850-km road trip on a single tank of gas in a Toyota Camry Hybrid and never had to worry about running out.

All that to suggest a PHEV is a great choice for city driving, but a conventional hybrid may suit your needs better if, like me, you do a lot of long-haul road-tripping.

Whether you’re motoring along on battery power alone or in gas-electric hybrid mode, the Clarity is smooth and mostly quiet. The gas engine never gets loud, even in flat-out acceleration. There is a notable amount of road noise at highway speeds, though.

The Clarity feels nimble, with quick steering and ride quality right on the line between firm and comfortable. In gentle driving, you’ll mostly use the Clarity’s regenerative brakes, whose pedal feel is smooth and progressive. The transition to the friction brakes can be abrupt, however, especially at low speeds.

The Honda Clarity’s base trim comes with most of the driver safety assists you expect in a nearly $45,000 car: forward collision warning, automatic braking, lane departure warning, lane keep assist, adaptive cruise control, and a right-side blind spot camera display that activates when you signal a right-hand turn or lane change.

Moving up to the Touring trim – its $48,505 price is $4,000 more than the base model – gets you navigation (in the same 8.0-inch touchscreen found in the base car), an integrated garage door remote, leather seats and steering wheel, and satellite radio.

The Clarity is also missing a few notable features. You can’t get a proper blind spot monitor that alerts you to vehicles on either side of the car; the Clarity also doesn’t include a rear cross-traffic alert to help you when backing out of a parking space. There are no heated rear seats or ventilated front seats, Honda doesn’t include automatic high beam assist, and there’s no option for 360-degree camera views. Those are all notable omissions in a car that projects a high-tech image.

Three years on, the Honda Clarity still boasts more electric driving range than any other PHEV in its price range, and it remains a nice car to drive.

The Clarity’s main downside is that a handful of the latest entry-level battery-only EVs are less expensive and promise 400-plus km driving range. And for a little more money, you can get a performance EV like the impressive Ford Mustang Mach-E, which starts in the low $50,000 range.

Still, the Clarity was a solid opening act for Honda’s electric vehicle aspirations, and even given its shortcomings, it seems strange that they’d pull the plug so soon.