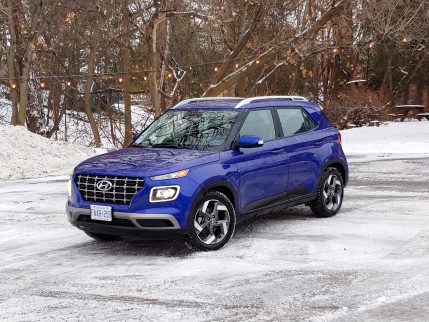 Two years ago, Hyundai began an expansion of its crossover and SUV lineup with the Kona, a subcompact that is now one of the brand’s best-selling models.

It followed that with the upscale Palisade three-row SUV, and the Venue you’re reading about now, another subcompact that slots in below the Kona.

The Hyundai Venue is notable for two things, aside from its handsome styling: at $17,099, it’s the least-expensive crossover in Canada; and it is one of a handful of recent utility vehicles that does not offer all-wheel drive. 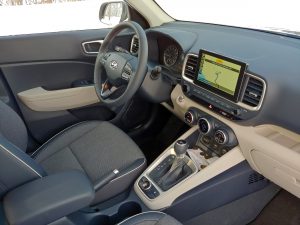 Under the Venue’s hood is a 1.6L four-cylinder from Hyundai’s new Smartstream family of engines. Despite its modest power output, this is a high-tech motor that uses innovations in its cooling, fuel injection and valve timing systems — and works with a new continuously variable transmission (CVT) — to boost fuel economy.

The payoff of those efforts wasn’t obvious after my week of frigid January city driving, including the aftermath of a 15-cm snowfall. Those conditions resulted in average fuel consumption of 9.1 L/100 km — a way off Hyundai’s city/highway estimates of 8.0/7.0 L/100 km. However, in the interest of giving credit where it’s due, that little motor generated great cabin heat in -20 degree Celsius weather.

Performance is predictably modest, with full-throttle acceleration that’s more noise than action. However, the Venue is perfectly pleasant in normal driving. The CVT is well-done, reacting smoothly and promptly to calls for acceleration, and it does its best to keep the engine quiet in normal driving. It also has a manual mode that lets you shift through seven preset ratios, and it uses through those presets in harder acceleration for a more natural automatic feel.

A dial behind the shift lever toggles normal, sport and snow drive settings. Sport mode brings up more immediate throttle response; the snow setting is meant to tailor performance to slippery conditions, but the difference between it and the car’s normal mode was hard to feel. 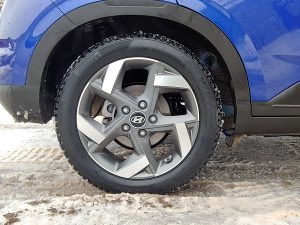 The Venue’s suspension is admirably compliant for a car that starts well under $20,000. It doesn’t sound as sophisticated on rough pavement, though, where it transmits clunks and thumps through the car’s structure. Our top-end Ultimate tester came with 17-inch wheels and relatively low-profile tires; the 15-inch wheel-and-tire setup used on the entry-level Essential and Preferred trims might eliminate some of that harshness.

While it’s based on the same platform as the Accent subcompact car, the Venue’s wheelbase is shorter and its seating position taller, two factors that can negatively affect ride comfort. The Venue’s extra height also means it’s easier to feel the body leaning in corners. If you’re not wedded to a crossover for your next car, test drive the Venue back-to-back with the Accent hatchback to see which one you like better. The Accent uses the same engine and transmission combination, helping to level the playing field between the two models.

Like most crossovers, the Venue’s taller body pays off in creating extra headroom for those inside, even with my test car’s sunroof. Rear-seat legroom is fine for riders of average height: I could easily sit behind a driver’s seat adjusted for my 5′-7″ frame, but two taller people would have a hard time getting comfortable. 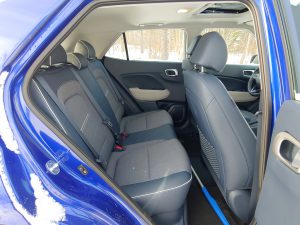 The same caveat applies to front-seat entry and exit. There’s not a lot of space between the steering wheel and the trailing edge of the front door frame. I had no trouble with that, but if I noticed it at my stature, taller and larger drivers might find it challenging to get in and out of this car.

Cargo space is almost equivalent to that of a small sedan. The space is a practical, square shape, but Hyundai says the Accent hatchback (somehow) offers nearly double the cargo capacity behind the rear seats. Among the Venue’s neat touches is a cargo privacy cover that slides down out of the way behind the rear seatback when it’s not needed. What that doesn’t solve is what to do with the cover when hauling large items with the rear seats folded.

Ultimate trim comes with automatic air conditioning with simple controls. However, I spent the week trying to twist the ring around the central temperature display — after all, it looks like it should turn — to make things warmer or cooler.

The materials in the Venue’s cabin were clearly chosen to suit the car’s $17,000 entry point. There’s very little inside that isn’t made of hard plastic, but as with most cars, you start to expect a little more in a top-trim model. 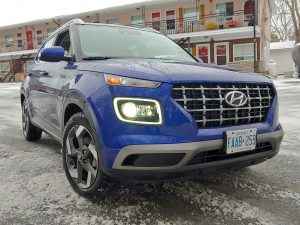 Instead, Hyundai justifies the Venue Ultimate’s $25,000 price with upscale features instead of posher materials. Ultimate gets LED headlights, daytime running lights, and taillights; it also brings navigation and automatic temperature control. As well, it’s one of two trims (the other being the less-expensive Preferred package) with a full suite of active safety assists, and the only Venue variant with rear disc brakes in place of drums in other trims.

The Venue’s real value, however, is in the Preferred trim level. At $21,500, it includes the automatic transmission (it’s optional in the base Essential model), along with a heated steering wheel, cruise control, passive keyless entry, and a sliding front centre armrest (a feature more useful than it sounds). Preferred trim also comes with forward collision warning with pedestrian detection and automatic braking, lane-keeping assist, automatic high beams, blind-spot monitoring with rear cross-traffic alert, and a driver attention warning.

And those items come on top of the Essential model’s heated front seats, power-adjustable/heated side mirrors, power windows, and power locks with basic keyless entry. And Venue Essential is actually a few hundred dollars less expensive than a similarly equipped Accent hatchback.

At first blush, it’s an odd choice for an automaker to offer a crossover without the winter-friendly option of AWD. Hyundai’s not alone in that, though: the similarly sized and priced Nissan Kicks is also FWD-only, and so is the larger, pricier Toyota C-HR.

What you’re seeing in that trend is the auto industry gearing up for small crossovers to replace subcompact cars. Hyundai last year eliminated the Accent sedan (leaving just the hatchback); and Nissan has cut its subcompact Micra and Versa models, making the Kicks its smallest vehicle. There is a vocal cohort of drivers lamenting this shift toward utility vehicles, and it’s not without reason: higher prices for SUVs could soon leave budget buyers with no new-vehicle options in the sub-$15,000 range.

However, well-executed vehicles like the Hyundai Venue make it hard to argue against the rise of entry-level crossovers. This is an utterly charming little utility that deserves your attention if you’re looking to spend about $20,000 on a small vehicle.