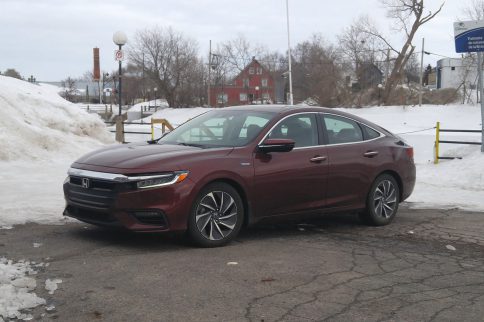 Since the end of the 1990s, Honda has used the Insight name on three different cars. The first was a tiny, two-seat hatchback; the second Insight wore a four-door hatchback body; and the third, and current, Insight is a four-door sedan.

The only thing these three cars have in common is their gas-electric hybrid powertrains.

Honda introduced the third-generation Insight in 2019 as the replacement for the Honda Civic Hybrid. In fact, that’s what the Insight is in all but its name: it’s based on the 10th-generation Civic sedan, but sports different interior and exterior styling. Honda made no changes to the Insight for the 2020 model year. 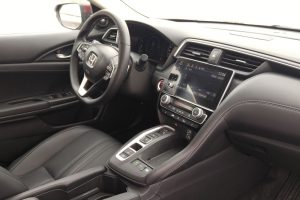 Honda says the Insight’s 1.5L gas engine and electric motor produce a combined 151 hp. That’s a little less than the Honda Civic’s standard gas engine, but like many hybrids, the Insight’s performance is bolstered by more generous electric torque. The Insight isn’t speedy, but its performance is refined; the only real noise happens at full-power acceleration, when the gas engine is called on to do much of the work.

In fair weather, the Insight will happily cruise along on electric power for short distances, while most requests for acceleration fire up the gas engine. Transitions from electric to combustion power and back are nearly seamless. An EV button on the console commands the car to run in electric mode as much as possible, but I feel like that’s something a hybrid should do on its own.

The Insight’s chassis is tuned more for comfort than handling, with a slightly softer ride than the Civic. Still, it’s a nimble city driver with the same quick steering responses as the current Civic and Accord. The Insight has better brake feel than many of today’s hybrids.

Despite its strong ties to the Civic, the Honda Insight feels posher inside. There’s little to remind you of that compact in here; instead, the cabin feels like a smaller version of the Accord. That echoes the car’s exterior, which makes the Insight look more substantial and more expensive than the Civic.

Trunk space is generous — the hybrid battery doesn’t take up any space — and there’s plenty of useful small-item storage in the cabin.

Among the Insight’s few cheap touches are its rear doors, which close with a tinny sound. 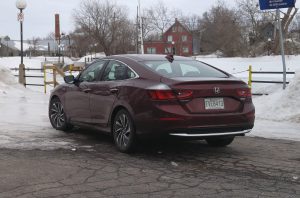 The Insight also comes with automatic high beam headlights, which were another of my test car’s few weak points. They were easily confused by reflective highway signs, which prompted the car to dip the high beams and then turn them back on.

The Honda Insight competes for hybrid buyers with the Toyota Prius, Hyundai’s Ioniq, and the recently discontinued Ford Fusion Hybrid. The Insight is more powerful than the Prius and Ioniq, but gives up some practicality to those models’ hatchback bodies. The Prius has another edge in its optional AWD system. The Fusion offers more power and sharper handling, but it’s an old design with a battery that takes up some trunk space.

Compared to the last two cars that have worn the same name — not to mention the previous-generation Civic Hybrid — the Honda Insight is a better value for its added comfort and powertrain refinement.

First, why does Honda split the attention of its hybrid buyers between the Insight and the Accord Hybrid? My Insight Touring test car is only $1,000 less than the entry-level Accord Hybrid, which is roomier and more powerful. Then there’s the related question of why Honda didn’t call this car what it is — a Civic Hybrid — and capitalize on that model’s popularity.

Second, what’s behind Honda’s decision to put its plug-in hybrid (PHEV) technology in a third car, the Clarity? I feel like it would have been easier to create a standard hybrid version of the Clarity, or a plug-in version of the Insight or Accord.

And finally, why are all of Honda’s hybrid models sedans? Toyota has found many buyers for its RAV4 Hybrid, which puts an efficient gas-electric powertrain in a popular crossover model. Honda is about to launch a CR-V hybrid in the U.S., but has announced no plan to bring it to Canada.

In the end, the Honda Insight is a well-done hybrid that suffers only from Honda’s questionable product planning decisions.