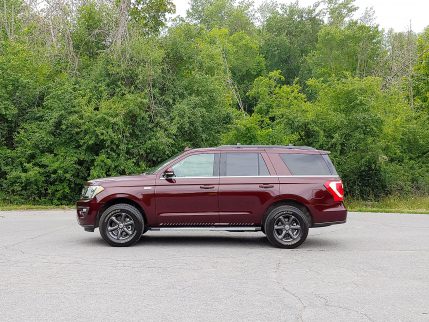 I grew up around small cars, so I’ve always gravitated toward them as an adult because they’re affordable, fuel-efficient and easy to park.

You’ll note that none of the above adjectives apply in any way to the Ford Expedition you’re reading about here. And yet every time I review a full-size SUV like the Expedition, I fall in love with it.

This is not a new thing. I’ve felt similar pangs for the Chevrolet Tahoe and Suburban and its near-twin, the GMC Yukon. The high-performance Dodge Durango SRT and Jeep Grand Cherokee SRT are even further from the centre of my compact-car universe, but I would happily add either (or both) to my personal fleet, given the budget to do so.

I’ve been reviewing cars for about 15 years as I write this, and in that time I have not been able to make sense of why I like big SUVs as much as I do. I guess it’s time to try again.

What’s new for the 2020 Ford Expedition?

This year, Ford adds a King Ranch trim, which slots in below the top-end Platinum version.

Ford redesigned the Expedition into its fourth generation in 2018 with a new aluminum body that cut a lot of weight out of this big vehicle. At the same time, Ford revised its 3.5L Ecoboost turbo V6 to make more power.

If the regular Expedition isn’t large enough for you, the Expedition Max has a longer body and more interior space.

The Expedition accelerates with serious urgency, thanks to an engine that combines more torque than the F-150’s diesel engine with nearly as much horsepower as that pickup’s available 5.0L V8. I will admit that I wished for the rumble of a V8 soundtrack while driving the Expedition, but if you can find a fault with this turbo V6’s performance, I’d love to hear about it.

A 10-speed transmission puts power to the road. It’s got a lot of work to do, shuffling through all those ratios, but did its job well in my test truck. All Expeditions come standard with four-wheel drive, which you engage manually with a dial on the centre console.

One of my favourite things about driving the Expedition is a tight turning circle that makes this big vehicle surprisingly easy to park. The ride is comfortable, but the suspension does a good job of preventing the tall body from pitching around on rough pavement.

The smaller, more car-like Explorer’s main fuel-economy advantage is in highway driving, where its more aerodynamic shape pays off. However, if you want big towing capacity, the Expedition’s limit is 4,082 kg to the Explorer’s 2,540 kg.

The Expedition’s towing capacity is also more generous than that of its competitors. My test vehicle had a trailer backup assist that lets you steer the truck and trailer using a dial on the dash.

The driver and front passenger get wide, comfortable seats in the Expedition’s spacious cabin. On the downside, if you’re slim like me, you’ll find yourself sliding around due to the lack of lateral support.

My test vehicle had optional second-row captain’s chairs instead of a three-place bench seat, which reduces total seating to seven. There’s plenty of legroom behind the front seats, no surprise given the Expedition’s size. The third row has enough space for adults to sit in reasonable comfort. The second-row seats tip forward to ease third-row access, but you’ll still have to be fairly nimble to get in and out.

Cargo space isn’t especially generous behind the third-row seats – the longer Expedition Max has more – but there’s enough room for a few duffel bags or a decent grocery haul.

Among my Expedition’s options were a pair of USB charging ports for the third row, which would come in handy on family road trips.

Like most Ford vehicles, the Expedition has a rotary gearshift knob. A manual mode lets you control the transmission using up- and downshift buttons behind the dial. That’s useful for downshifting on long downhill stretches when towing a heavy trailer, but it’s less intuitive than a traditional gearshift lever.

The other was the $2,500 FX4 off-road package with 360-degree cameras. It focuses on equipment to make the Expedition off-road ready, like all-terrain tires, skid plates and fuel tank protection, a limited-slip differential, and upgraded shock absorbers. The 360-degree camera system is there to make parking easier, but also provides off-road drivers a view of the terrain around the truck. Ford also offers a more basic version of the FX4 package without the 360-degree cameras.

Finally, my Expedition test vehicle had a panoramic sunroof, which is a $1,850 addition.

Despite my best efforts, I still can’t explain why I like big SUVs like the Expedition. However, I can tell you why I enjoyed driving this Expedition as much as I did: It’s surprisingly fuel-efficient — certainly more so than its V8-powered competitors – and it’s spacious and capable while driving like a smaller vehicle.

The Expedition is one of Ford’s best-executed models because it makes no effort to pretend to be anything it’s not. It’s just a really good full-size SUV.