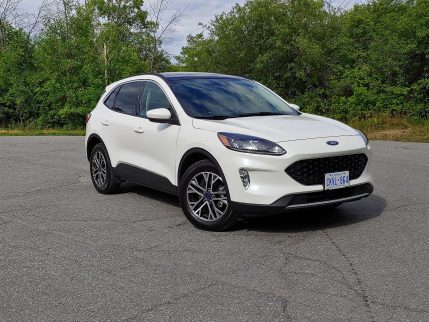 The Escape has done a lot of heavy lifting for Ford since its 2001 arrival. This compact crossover has perpetually been one of the most popular vehicles in its class, despite few significant updates in its first dozen years on the market.

In 2013, the third-generation Escape marked the model’s first major move forward. That version was a lot more fun to drive, with sleeker styling and more technology in the cabin and under the hood.

Ford has reworked the Escape once again for 2020, but it’s a cautious redesign that proves the company is unwilling to gamble too much with this small SUV’s big success.

The Escape’s cabin looks and feels modern, with the expected touchscreen mounted atop the dash to control audio, phone and navigation functions. There are also a few redundant buttons below the screen for basic audio controls.

All air-conditioning functions are controlled with a simple array of buttons set lower on the dash. My Escape SEL tester had a single-zone automatic climate system, though I had expected a dual-zone setup to go with a nearly $40,000 as-tested price.

Interior space is good, but nothing special for the compact SUV segment. However, it’s worth mentioning the generous rear-seat headroom, even with my tester’s optional panoramic sunroof.

Most adults will find the rear seat cushions too shallow and low to the floor to provide good thigh support. Also, the rear door openings are narrow, so passengers with longer legs will have to do some minor gymnastics to get in and out of the back seats.

Overall, the Escape’s interior looks and feels all right for the SEL’s $35,000 starting price, but there are elements that feel cheap for my tester’s tag. Rear-seat riders will not be impressed by the hard, plasticky door panels; the front doors are done in a nicer padded material.

The rear seats fold nearly flat to expand cargo space, but there’s no way to lower them from the cargo opening (a nicety that many of the Escape’s competitors offer in lower-priced trims). Instead, you have to open one of the rear doors and pull the lever on the side of the bottom seat cushion.

One of the most notable mechanical changes in the fourth-generation Ford Escape is a new turbocharged 1.5L three-cylinder engine that replaces a four-cylinder turbo as the base power source. Despite losing a cylinder, its 181 hp and 190 lb-ft of torque are increases of 2 hp and 13 lb-ft.

The three-cylinder makes good low-speed power, but feels only adequate when accelerating at higher speeds. However, Ford has done a good job of masking the odd mechanical sounds and vibrations typical of a three-cylinder engine.

All Escape models are standard with an eight-speed transmission in place of 2019’s six-speed. It generally works well, but on several occasions delivered rough or jerky shifts. There’s no provision for manual shifting, but a sport mode makes the engine and transmission more responsive to the gas pedal.

The ride is comfortable and agile enough for city driving, but this new Escape feels less eager to take quick corners than the previous generation.

My Escape SEL tester had optional AWD, which you can also add to S and SE trim levels. The top-end Titanium model comes standard with AWD.

Ford also makes hybrid and plug-in hybrid (PHEV) versions of the Escape if you want a more economical drive.

As I mentioned early on, the lack of dual-zone A/C stood out in a nearly $40,000 car. Other cheap touches were the manual day/night rearview mirror and undamped assist handles that snap back up against the headliner when you let go of them.

You have to move up to the top-end Titanium trim ($40,149) for dual-zone climate control and an auto-dimming mirror. Titanium also adds a digital gauge cluster, an active park assist function, adaptive cruise control, and LED headlights.

The 2020 Ford Escape is a cautious move forward for this popular small crossover. It looks plainer and is less interesting to drive, but those characteristics make it a safer bet in the competitive compact crossover class.