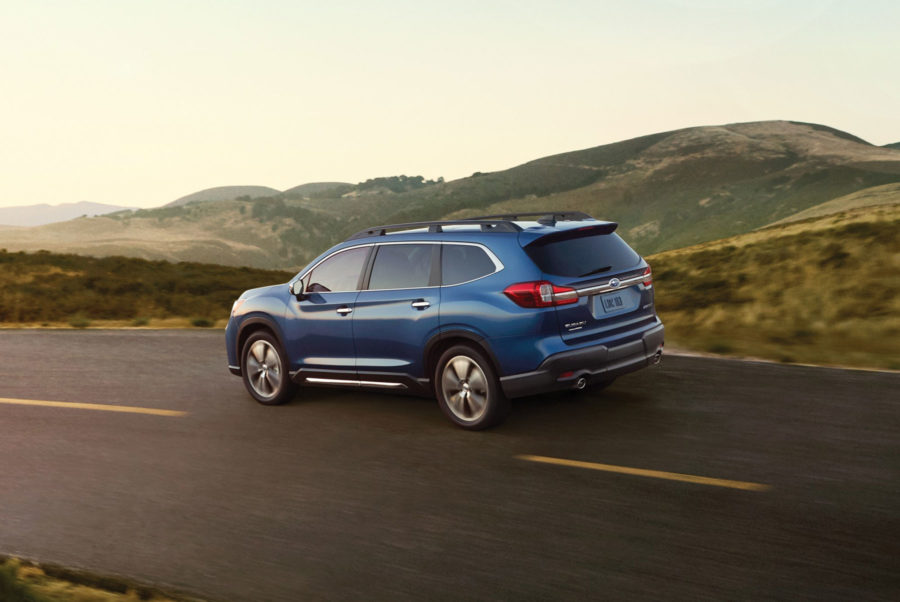 Subaru’s first seven-seat SUV was the Tribeca, a generic-looking vehicle named after a well-known neighbourhood in Manhattan. It was a weird name for a vehicle better-suited to the suburbs than a crowded urban setting. Most crossover shoppers were unimpressed.

But the market for mid-size SUVs with three rows of seats is an important one, so Subaru is back for a second try with the Ascent. It’s hard to get creative when styling a practical family vehicle, so the Ascent still doesn’t stand out, but a strong resemblance to the Forester and Outback models helps identify it as a Subaru.

Middle of the pack sizing: Subaru has its eye on the heart of the mid-size SUV segment with the Ascent SUV. It’s longer than the Toyota Highlander, Hyundai Santa Fe XL and Honda Pilot, and shorter than the Nissan Pathfinder, Chevrolet Traverse and Volkswagen Atlas.

Wide rear seats: Subaru saved its space-efficient engineering efforts for the second row, where there’s more hip room than in either the Pilot or Traverse. That width matters more in Ascent models with the standard, three-place bench seat. Our Premier trim tester had standard captain’s chairs that are optional in less-expensive models.

The Ascent’s rear doors swing out nearly 90 degrees to reveal wide openings that ease rear-seat access.
It’s worth noting the Ascent could soon be out-sized by a couple of the models we mentioned above. Hyundai will soon launch the 2020 Palisade to replace the Santa Fe XL, and the Toyota Highlander and Nissan Pathfinder are among the segment’s older designs.

Small third-row seats: Like many mid-size crossover SUVs, the Subaru Ascent’s third row is not particularly spacious. There’s enough room for kids or small adults, but no one of average height or taller will want to spend a lot of time back there.
Cargo space: Typically, there’s not a lot of trunk space behind the third row seats. Stowing them away turned our test car into a four-seater with a vast cargo area.

Note that we seem to be in the minority in finding the Ascent’s ride too harsh. Other car reviewers we know judged the suspension to be quite compliant. That’s why it’s important to take a test drive and evaluate a car’s performance for yourself.

One of Ascent’s strengths is its quiet cabin. Not much engine or road noise gets inside, even at highway speeds. That’s particularly remarkable given our tester’s aggressive winter tires, designed for grip over a quiet ride.

In mid-size crossovers, the most obvious standard feature differences are in safety equipment. Here’s how the Ascent stacks up against a few key competitors.

1. Honda Pilot: Honda equips its three-row crossover with the same safety features as the base Ascent, but for $5,000 more. Honda adds blind-spot monitoring and rear cross-traffic alert at well over $50,000.

2. Nissan Pathfinder: All Pathfinder models come with automatic braking from $33,200. Nissan adds a blind-spot monitor and rear cross-traffic alert at close to $40,000.

3. Chevrolet Traverse: Chevrolet puts blind-spot and rear cross-traffic alerts in the Traverse at $48,000. Low-speed automatic braking and lane-keep assist are included for about $54,000. Chevrolet asks $60,000 for a Traverse with all-speed automatic emergency braking.

4. Toyota Highlander: Starting at $37,300, Toyota fits every Highlander with automatic braking, adaptive cruise and lane-departure alert with steering assist. You have to pay more for blind-spot and rear cross-traffic monitoring.

If future costs are a concern for you, consider the Ascent’s standard tire sizes. Convenience and Touring use 18-inch tires, and Limited and Premier have 20-inch tires that will be more expensive to replace. Larger wheel and tire combinations also tend to ride more harshly.

The 2019 Subaru Ascent is a more cohesive crossover than its Tribeca predecessor. Subaru got the basics right with good interior space and a quiet cabin. We like the new turbo engine’s performance; our fuel economy was not great, but we blame that mostly on cold weather.

If you’re in the market for a family vehicle with all-weather confidence, the Subaru Ascent should be on your test drive list.