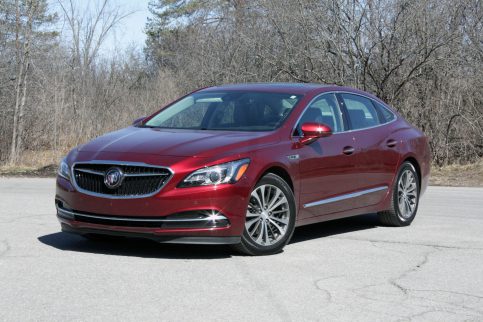 If you want a good deal on a used vehicle, it helps to shop for the models that not everyone else wants. As with any commodity, increased demand for a given car or truck drives up prices.

The amount of time a used vehicle sits on a dealer’s lot is a good indicator of that demand. The longer a car or truck languishes, the more likely you’ll be able to get a good deal on it.

The automotive market analysts at iSeeCars.com have compiled a list of the 10 slowest-selling used vehicles among one- to three-year-old models. If price is your primary consideration for your next gently used car or truck, this list is a good starting point.

According to iSeeCars.com, the Porsche Cayenne luxury SUV is the slowest selling late-model used vehicle on the market.

The Cayenne S e-Hybrid is a plug-in model that can go short distances on electricity alone. After that, a supercharged gas V6 works with the electric motor to make 416 hp.

Despite rapid depreciation, the potential for pricey maintenance and repairs is a turn-off. Still, in Ontario, it’s easy to find a three-year-old base Cayenne for less than $50,000.

A pair of Buick sedans occupy slots two and three in iSeeCars.com’s top 10.

The redesigned 2018 Regal looks like a sedan, but is actually a mid-size hatchback with generous cargo space. Before that, it had a proper trunk and a smaller interior with the space of a compact. Older cars use 2.4L and 2.0L turbo four-cylinder engines. The 2018 design uses the 2.0L turbo and an optional V6.

A second-generation LaCrosse arrived in 2017. Both generations start with a four-cylinder engine, but the V6 is a better fit and more widely available. An optional adaptive suspension lends the LaCrosse surprisingly good handling.

Regal and LaCrosse sales are suffering due to the market’s preference for crossovers and SUVs. If you don’t follow trends, both of these Buicks are well-done upscale cars that are worth considering. No matter where you are in Ontario, you’ll find recent examples of either model for less than $20,000.

Porsche 911 models come with six-cylinder engines making anywhere from 345 to nearly 700 horsepower. GT2 and GT3 models are hardcore performance machines, while the Carrera, Targa and Turbo models are better-suited to daily driving.

Price is what makes the 911 a slow seller. Most used examples are recent, low-kilometre cars, which reach well into six-figure territory.

Another reason for slow 911 sales is the Chevrolet Corvette, redesigned in 2014: it’s a serious Porsche 911 competitor at comparatively low prices.

It’s a surprise to us that the slowest-selling used Land Rover is the brand’s entry-level model. The Disco Sport, as it’s commonly known, is a compact SUV with seating for seven that was a new model in 2015.

All versions use a 2.0L turbo four-cylinder engine with 240 hp, 4WD and a nine-speed automatic transmission. In 2018, Land Rover added an optional 286-hp engine.

The Land Rover name has a lot of cachet, but we think the Discovery Sport suffers from its in-between status. The smaller Evoque looks cooler, and the flagship Range Rover is a more serious luxury vehicle.

Introduced in 2009, the Ford Flex mid-size SUV proved polarizing from the start. Its boxy styling is not to everyone’s taste, though it has useful space for adults in all three rows of seating.

A base V6 provides useful power, and an optional EcoBoost turbo V6 performs like a small V8. The Flex handles surprisingly well for its size and is a pleasant, comfortable vehicle to drive.

The Flex’s decade-old design explains its appearance in iSeeCars.com’s list of slow sellers. If you’re shopping for an SUV about three years old, used examples of the Flex command between $25,000 and $37,000.

Small European SUVs like the BMW X3, Audi Q5, Mercedes-Benz GLC-Class and Volvo XC60 are all popular among luxury buyers. The compact Cadillac XT5’s slow sales are due to the brand’s reputation for cars that appeal to an older demographic.

That stigma persists despite Cadillac’s efforts to attract younger buyers with modern-looking vehicles like the XT5. Its engine is a 3.6L V6 with 310 hp. An eight-speed automatic transmission is standard, but all-wheel drive is optional.

If families are flocking to mid-size SUVs, then why is Mazda’s seven-seat CX-9 a slow seller? It’s got all the modern touches, like a turbo four-cylinder engine and lots of available convenience and safety technology.

Well, the engine’s 250 hp on premium fuel is meager compared with its competitors, and that number drops to 227 on regular gas. The CX-9’s better-than-average torque isn’t enough to make up for those shortcomings. And the cabin is among the smallest in its class, especially in the third row.

GS-L and GT trims are attractive for their leather seating, and the latter adds high-tech driver aids. Either trim comes in under $35,000 for three-year-old CX-9 models.

Like the Buick models we discussed above, the Ford Taurus is a slow seller because of its un-trendy sedan body style. In recent years, this car has been more popular with police departments than regular consumers.

Engine choices in three-year-old models include a 2.0L turbo four-cylinder, a regular V6 and a turbo V6 for the speedy SHO trim. The 288-hp mid-line V6 is most common by far.

The Taurus’s lack of popularity in Ontario means that even nearly new Limited models go for well under $30,000.

The Lincoln MKX SUV suffers the same hardship as the Cadillac XT5. It’s a well-executed mid-size utility with five seats, but many buyers are turned off by Lincoln’s stodgy reputation.

Base power is from a 3.7L V6 with 303 hp, and an optional 2.7L turbo V6 feels faster than its 335 hp suggests. We think MKX sales also suffer because buyers see the similarity to the less-posh Ford Edge.

Still, the MKX is a bargain, considering it is the more luxurious of the two by far. Three-year-old examples of the MKX with low kilometres routinely sell for well under $35,000.