Car Reviews and Tips » Why Did Ford Use “Mustang” for the Mach E? 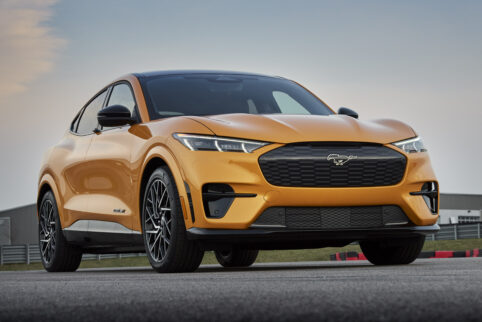 Electric cars are known for their quiet operation, not exactly something you associate when you hear the name Mustang. Despite that, Ford branded the Mach E with the Mustang name and not just for the recognition. By including their first-ever electric vehicle (EV) into the Mustang portfolio, Ford positions itself as a performance EV manufacturer. With a lot of auto manufacturers developing and releasing cars in the next couple of years, Ford needs to stand apart by developing a performance-oriented EV.

Breaking Down a Ford Mustang

The Ford Mustang is well known for its multiple variants with large, sometimes supercharged V8 engines. Traditionally, the Mustang is a two-door coupe or convertible that can hold up to four passengers. Although, truthfully, it can really only seat two people comfortably because it’s rear-wheel drive, which creates a hump in the middle of the interior to make room for the drive shaft. To make room for the rear differential, which is a set of gears that sends power to the road, the trunk and the back seat are sacrificed.

Some iterations of the Mustang have a whopping 760 horsepower and 625-pound feet of torque out of a moderately sized 5.2-litre supercharged V8.

Not sure what that means? Let’s just call it ridiculously fast. For 56 years, the Ford Mustang has been Ford’s best example of what their performance division can do.

Multiple generations of families have owned versions of Mustangs over its product life, proving it’s a family affair. Fans love their Mustangs and would never own any other sports car. The desire for V8 rear-wheel drive muscle cars grows each day, with a lot of companies shipping Ford Mustangs to countries in Europe, Asia, and the Middle East, where Mustangs aren’t always sold brand new.

Ford Evolves With Electric Power to Produce an “Electric Mustang”

So, why so much talk about the traditional Mustang? Because it’s been a hit for 56 years. But like every product, it must evolve to keep up with the times.

However, EVs are just gaining popularity. Giving the Mustang Mach E traditional Mustang design cues on the outside has made it more familiar to Mustang fans, making it easier to accept its drivetrain differences.

Believe it or not, EVs are actually quicker than a traditional gas vehicle. The main reason is because an electric vehicle motor has no transmission and can therefore accelerate faster. You’ve likely seen the Tesla videos where the owner takes off and surprises people with their speed? That’s what we’re talking about.

Ford will create a couple performance-oriented versions of the Mustang to build on the classic car’s heritage in a new light.

Ford has considered their emergence into the EV market. The Mustang Mach E is a strong entry into the market, building on a strong fan base ready to explore the world of electrification. The company is also currently taking pre-orders for the first ever electric Ford F-150 Lightning. Ford is ready to take the EV market by storm, and they’re playing directly to their current customers.