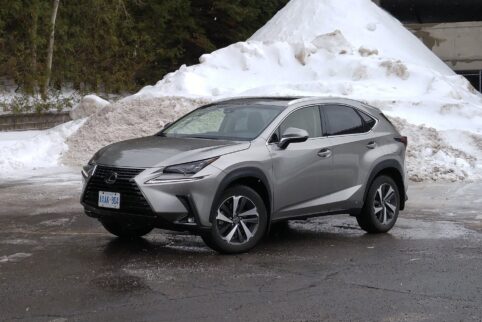 For our second article about buying a used compact luxury crossover, we’re taking a look at the segment’s Japanese competitors.

The Acura RDX was Japan’s first small upscale SUV model at its 2007 introduction. Acura redesigned it into a second generation in 2013 – the version we’re looking at today – and a third-gen model arrived in 2019.

Infiniti introduced the EX35 compact crossover in 2008. It was sold through 2017 without any major changes, but was renamed QX50 in 2014, which is where our look at this model begins.

Lexus waited until 2015 to enter this now-popular field with the NX, which wore one of the segment’s most daring designs. As we write this, the 2021 Lexus NX is in the final year of its first generation. A new version set to arrive as a 2022 model will be the first NX built in Canada.

For 2022, these three established models face a newcomer in the Genesis GV70, the first compact crossover from the Hyundai Motor Group’s upscale Genesis brand. While it’s too new to discuss as a used vehicle, the GV70 is a significant addition to the field with its posh styling, strong value and optional 375-hp engine.

In 2016, Acura refreshed the RDX with updated styling that included standard LED headlights and new safety features. The second-gen RDX’s final year was 2018, and Acura rolled out a new third-generation model in 2019.

VCM is also a suspect in complaints about a driveline vibration linked to the RDX’s driveshaft. (https://acurazine.com/forums/2g-rdx-problems-fixes-409/drive-line-vibration-%40-around-1500-rpm-upshifts-901179/)

The VCM system comes up again in this thread about a shudder or “judder” sensation. Some drivers feel it is related to the transmission, but others think it is also caused by the cylinder deactivation setup. (https://acurazine.com/forums/2g-rdx-problems-fixes-409/2014-rdx-transmission-shudder-judder-not-fixed-after-second-attempt-960983/)

Early in the second-gen RDX’s run, some owners had rear shocks replaced under warranty due to premature wear. During your test drive, listen for clunking noises from the rear of the car over rough roads, and note any tendency of the rear end to bounce after driving over humps in the pavement at city cruising and highway speeds. You can also do a visual inspection of the shocks by peering between the rear tire and wheel arch to look for oil leaking from the body of the shock, which usually means it’s worn out and needs to be replaced. (https://acurazine.com/forums/2g-rdx-problems-fixes-409/rear-shocks-going-bad-878856/)

Lexus’s first compact luxury crossover was initially marketed as the NX 200t and NX 300h, with each version’s name reflecting its powertrain. The NX 200t uses a 2.0L turbo four-cylinder engine (235 hp/258 lb-ft) and a six-speed transmission, and the NX 300h is a gas-electric hybrid with 194 hp.

In 2018, Lexus revised the car’s styling, smoothed out its ride, and consolidated both variants under the NX 300 label, but kept the 300h designation for hybrid models.

Start your test drive of a used first-generation NX by checking the engine coolant level while the engine is cold. If it’s low, the car could have a leaking water pump, which is one of the NX’s most common mechanical issues. (https://www.clublexus.com/forums/ls-1st-and-2nd-gen-1990-2000/699214-major-coolant-leak.html)

The NX was part of a Lexus recall campaign to replace fuel pumps that could fail and cause the engine to stall out.

Spend some time working through the NX infotainment system’s various functions. Many owners complain of a display that freezes, locks up or goes blank. If you’re testing a car with navigation, try that out, too, as some drivers say it’s not easy to use, especially if you try to program a destination using voice commands. (https://www.clublexus.com/forums/nx-models-2015-present/766894-nx-electronics-bug-infotainment-display-sound-and-lock-up-issues-merged-thread.html)

When driving, listen for creaks and rattles in the cabin. You should expect some, and will have to decide if you can live with that.

If you test an NX with a sunroof and power tailgate, open and close both of them several times to make sure they work smoothly and without cranky-sounding noises.

In 2016, Infiniti updated the QX50’s styling and stretched its wheelbase to add interior space. After 2017, the QX50 took a year’s hiatus before an all-new version arrived for 2018.

Listen for a humming or groaning sound after you start the QX50’s engine, which could be traced to a faulty fuel pump. This seems to be more common in the older EX models, but is worth watching out for. (https://forums.nicoclub.com/just-had-my-fuel-pump-replaced-no-more-humming-at-start-up-t356268.html)

If you have time during your test drive, take the QX50 through a high-pressure/touchless car wash and watch for leaks from the sunroof. (https://forums.nicoclub.com/leaky-sunroof-t342116.html)

As with many modern cars, a healthy battery is key to keeping a QX50 running well. If your car exhibits any strange electrical problems, begin your diagnosis by checking the battery voltage, which should be just over 12 volts when the car is turned off. A weak battery may have enough power to start the car, but the voltage can be just low enough to upset the car’s sensitive computerized controls.