Car Reviews and Tips » The Advantages of a Hatchback 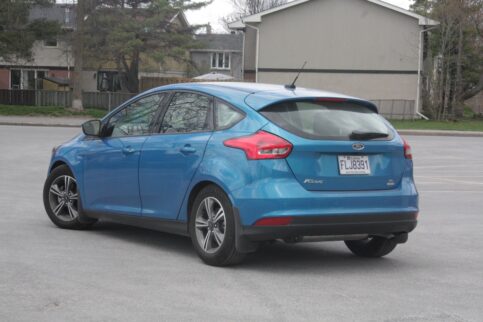 At the end of 2020, we saw a mass exodus from the sedan market by the big three American automakers. This is because 70% of vehicles bought in the US are SUVs. Another very popular vehicle type is the hatchback. It offers the versatility of an SUV but is much better on gas. By exploring the differences between hatchbacks and sedans, we’ll highlight why hatchbacks make a good choice for both a family and an individual.

What Is a Hatchback?

Hatchbacks were first introduced in 1938 and rose to popularity in the 1970s and 1980s with soaring gas prices in the US. Traditional hatchbacks are defined as a two-box configuration. The first box is the engine compartment, and the second is for the passengers and cargo. The passenger and cargo areas are a shared space.

One distinctive feature of the hatchback is the large rear door, which allows access to the cargo area. Most hatchbacks will be referred to as either a three- or five-door, depending on how many passenger doors there are.

What Is a Sedan?

Sedans are defined by the three-box configuration: one box for the engine bay, one for the passenger compartment, and one for the luggage compartment. However, the rear seats usually fold down so there’s a small pass-through for some cargo.

Sedans have been around since the introduction of the car. They’ve been always popular until the last decade, when SUVs began taking over sedan market share. (Case in point: Kelley Blue Book Canada listed only two passenger cars—the Honday Civic and Toyota Corolla—in the top 10 best-selling new vehicles for the first half of 2021. The rest were trucks, SUVs, or sub-compact SUVs.)

Advantages of a Hatchback

Hatchbacks offer a versatility that sedans don’t. With the lift of a lever or the press of a button, either some or all of the seats fold down to create a large, open cargo area. This isn’t possible with a sedan.

Hatchbacks also give you the flexibility to adjust how many people or how much cargo you carry based on your current needs, meaning you can change the layout of the vehicle in a few minutes. Winter family trip to the Muskokas? Not a problem. Weekend fishing trip with your best friend? Also easy to pack for.

Disadvantages of a Hatchback

The hatchback has two cons compared to the sedan. First, if you don’t have a cargo cover, all of your cargo will be visible for everyone to see. Second, since the cargo area is in the passenger area, you may hear more noise inside the cabin.

However, there are simple solutions. Most hatchbacks come with a cargo area cover, so one issue is already taken care of. As far as the road and wind noise, a test drive will help you decide if the noise will be an issue for you.

Flexibility on the Go

Hatchbacks offer the same driving dynamics as a sedan with a versatility that can only be matched by an SUV or minivan. If you’re not sure how many people or how much cargo you may carry from day to day, a hatchback could be the perfect city vehicle for you.