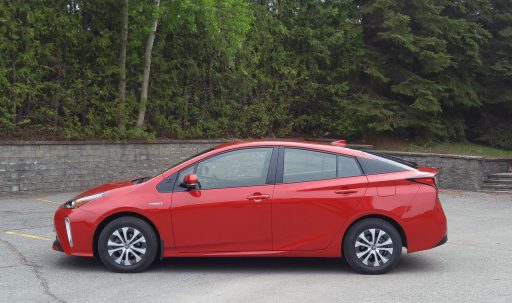 In its 20 years in Canada, the Toyota Prius’s numerous updates have helped it become arguably the best-known hybrid on the market.

This year, Toyota amps up the Prius’s appeal even more with the model’s first-ever all-wheel drive option. The carmaker hopes this new configuration will entice shoppers who might otherwise choose a crossover to get four-wheel traction. That puts the Prius in the same boat as the Mazda3 and Nissan Altima, whose latest designs also offer AWD.

Like its other AWD hybrids (which are all SUVs), the Prius AWD-e uses a second electric motor to power the rear axle. This eliminates the need for a driveshaft physically connecting the front and rear wheels.

The rest of the Prius formula is the same. A gas engine works with a second motor to drive the front wheels. Performance is nothing special, unless low fuel consumption is your key indicator. In that case, it’s easy to like the average of 4.1 L/100 km I saw in a week of city driving, without major adjustments to my driving style. That result compares nicely with Toyota’s ratings of 4.5/4.9 L/100 km (city/highway) for the Prius AWD-e. It’s rare I test a car whose real-world economy bests its maker’s estimates.

Despite its modest 121 hp, the Prius handily keeps up with traffic. You can feel the torquey electric motor doing a lot of the work at full throttle. On the other hand, in gentle driving my Prius test car would switch to running on electricity alone up to about 80 km/h. An EV mode button commands the car to drive on the battery by itself, but only in relaxed acceleration and only with a well-charged battery.

Toyota also makes a plug-in hybrid version of the Prius called Prime that promises 40 km of all-electric driving and as much as 1,035 km total driving range.

I’ve joked for some time that getting around in a Prius is like driving a car via a tablet. That’s never been closer to the truth than in my Technology Package-equipped test car, which has an 11.6-inch vertically oriented touchscreen in the dash.

It’s well done, but the backup camera image takes up just the top third of the screen. The rest of the screen goes black while the car is in reverse, so your passenger has to wait until the car is shifted out of reverse to adjust climate and radio settings. This is a first-world problem, for sure, but with a screen this large, there must be a more sophisticated solution.

On either side of the screen are touch-sensitive controls for climate control and stereo volume. These are frustrating to use when the car is moving. The single set of temperature controls highlights the Prius’s lack of dual-zone climate control, a glaring omission in a tech-intensive car.

One last tech-related gripe: the Prius’s passive keyless entry system only puts touch sensors on the driver’s door and tailgate. I missed having a touch-sensitive handle on the front passenger door, at least. Meanwhile, the 2019 Toyota RAV4 has touch-to-unlock handles on all four doors. Why can’t the Prius?

This fourth-generation Toyota Prius is better at keeping road noise out of the cabin than its predecessors. Still, there’s a notable amount of tire roar at highway speeds. I was more impressed with how well the Prius’s suspension and structure isolated the cabin from potholes and other hard impacts.

Some of the credit goes to Toyota’s decision to eschew the big wheels and low-profile tires common among many of today’s cars. The Prius rolls on relatively small 15-inch tires that also promise to be inexpensive to replace.

What 20 years of incremental improvements have not brought to the Prius is sporty handling. You’re better off taking your time than testing the grip of those skinny, low-rolling resistance tires.

Many aspects of the Prius’s styling are the result of function-over-form decisions. The roof tapers dramatically toward the rear for better aerodynamics, but also diminishes rear-seat headroom. Still, the Prius is a perfectly useful car for four adults, if they don’t mind close quarters.

From the driver’s seat, the thick A-pillars create large blind spots. If you don’t make an effort to look around them as you’re turning corners or negotiating crowded parking lots, it’s easy to miss a person or even a moving vehicle behind the pillars.

You can get the new AWD-e system for $1,000 more, which also includes fog lights.

My Prius Advanced Technology test car comes standard with AWD-e and is priced at $34,790. It also adds auto-levelling headlights that bend into turns and parking sensors with intelligent parking assist.

In two decades, Toyota has put a lot of effort into refining its hybrid technology instead of developing an all-electric car. Meanwhile, car companies who got into hybrids well after Toyota — like Kia and Hyundai, for example — now sell multiple battery-only models.

Toyota is on record stating its belief that it has helped reduce carbon emissions more by selling loads of hybrids than it would have with an EV. Hybrids are also an easier sell for many drivers because they can travel long distances without relying on charging stations.

Now, Toyota thinks two-thirds of Prius buyers in Canada will pay more to get the car with AWD. Given the Prius’s thrifty fuel economy and the popularity of AWD in the snowier parts of Canada, the company’s prediction is probably sound. It’s hard to find ways to make a good thing better, but Toyota has done it with the Prius AWD-e.