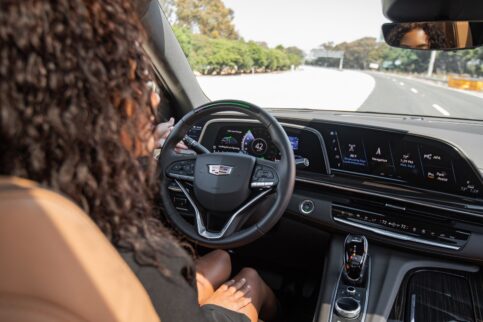 In this month’s auto news highlights, Kia is amping up its electric vehicle profile with a high-performance version of its EV6, while Dodge is promising – or is that threatening? – a future electric muscle car louder and faster than its brutal Hellcat models.

The latest from GM is a Super Cruise update that triples the size of the Canadian network of roadways on which the semi-autonomous drive system can be used.

Finally, Ford is getting set to roll out a more rugged Maverick pickup with the compact model’s first Tremor off-road option.

The Kia EV6 will join the ranks of high-performance BEVs in late 2022 when a new 576-hp GT model takes its place atop the electric crossover’s lineup.

Kia says the EV6 GT will be its quickest car ever, thanks to a dual-motor AWD system that cranks out nearly double the power of the current EV6 GT-Line flagship. The automaker claims the GT model will do the 0-100 km/h sprint in a supercar-like 3.4 seconds, about a second quicker than the 320-hp GT-Line model.

To go along with its extra performance, Kia fits the EV6 GT with stronger brakes, adjustable shocks, and other suspension tweaks. There are also special drive modes, include a drift setting that sends more power to the rear wheels to enable smoky power slides.

While the EV6 GT will be faster, it won’t go as far on a charge as the car’s current offerings. Kia estimates about 330 km of driving range compared to 440 km in today’s AWD Long Range model, with which the GT shares its 77.4-kWh battery.

Subtle cosmetic cues will set the EV6 GT apart from the less-potent GT-Line models, including 21-inch wheels, a rear spoiler, and sport seats done up in faux-suede upholstery.

Dodge will make its first foray into the electrified vehicle marketplace next year with a new compact crossover model called the Hornet.

The 2023 Dodge Hornet R/T will be a plug-in hybrid powered by a 1.3L turbo engine and an electric motor promising around 50 km of all-electric driving on a full charge. Together, the Hornet’s gas and electric power sources will put 285 hp and 383 lb-ft of torque through a six-speed automatic transmission, which Dodge says will make it the most powerful vehicle in its class.

To help the Hornet R/T stay true to Dodge’s sports car roots, it will come with a PowerShot function that unlocks an extra 25 hp and “instant” torque to cut a full second off the R/T’s 0-97 km/h (0-60 mph) acceleration time. You’ll also be able to toggle three different PHEV modes to optimize efficiency in a variety of driving scenarios.

While the Hornet R/T PHEV is set to arrive next spring, Dodge will launch the Hornet lineup at the end of this year with a gas-powered GT trim using a 2.0L turbo engine and priced under $40,000.

Dodge has also provided a further glimpse into its electrified future with the Charger Daytona SRT Concept, which combines the brand’s muscle-car heritage with an electric drivetrain. Under styling inspired by the current Charger and Challenger models – which will go away after 2023 – the Daytona concept uses an 800-volt drive system Dodge says will provide faster acceleration than its Hellcat V8 powertrains. Meanwhile, a rear-mounted amplifier system will pump out an “exhaust” sound as loud as the Hellcat’s.

Dodge has said it plans to begin selling its first fully electric vehicle in 2024, which will likely either be a Daytona Concept-inspired sports car or a battery-powered Ram pickup.

Mitsubishi will give its Outlander PHEV a big upgrade in November when it plugs the brand’s gas-electric powertrain into the fourth-generation version of the crossover that debuted in 2022.

Along with adopting the fourth-gen model’s bolder styling, the 2023 Outlander PHEV will also get more powerful electric motors and a bigger battery for improved performance and electric driving range. Mitsu says the new Outlander PHEV’s front and rear electric motors will make 114 hp and 134 hp respectively, up from the outgoing model’s 80-hp and 90-hp motors. As before, those motors will be backed up by a 2.4L gas engine.

Mitsu doesn’t say what kind of electric range the new Outlander PHEV will be capable of, but a new battery with 45 per cent more energy capacity should do better than the current version’s 39 km.

The redesigned model will come standard with highway driving assist, navigation, digital gauges, and a 9.0-inch touchscreen. Production of the new Outlander PHEV is set to begin in October, with vehicles due in showrooms in November.

Later this year, General Motors will expand the capabilities of its Super Cruise highway driving assist system to include 80,000 km of Canadian highways, more than tripling the system’s map from its current 24,000-km network.

Super Cruise is a semi-autonomous driving setup that can effectively control the vehicle without the driver’s input. The catch is that it only works on roads that GM has mapped; stray from that map, and the system will deactivate and require the driver to take over.

The forthcoming update will expand Super Cruise’s capabilities to include the kinds of two-lane, undivided roads that criss-cross the country, including large sections of the Trans-Canada Highway. Currently, it only works on divided, limited-access roadways.

As before, Super Cruise-equipped vehicles will watch your eyes and head to make sure you’re paying attention to what’s going on in case it needs you to take over.

The expanded Super Cruise map will be included in many vehicles rolling off GM assembly lines in late 2022. Earlier Super Cruise models will get the new map uploaded for free via an over-the-air update.

In September, Ford will begin taking orders for the 2023 Maverick Tremor, a toughened-up version of the compact pickup designed for more challenging off-road driving.

Available only on all-wheel drive models (which come standard with a 2.0L turbocharged engine), the Tremor package includes a more sophisticated AWD system with twin-clutch locking rear differential that can send almost all the rear axle’s power to whichever wheel has the most grip.

A trail control function works like off-road cruise control, working the throttle and brakes automatically. A one-inch suspension lift adds ground clearance, and all-terrain tires do the work of digging through mud. Ford has also built in a higher-capacity transmission fluid cooler, more rugged axle shafts, and underbody skid plates to help the Maverick withstand the rigours of off-road running.

Setting the Maverick Tremor apart cosmetically are orange accents inside and out, blacked-out lights and logos, and a special grille.

The 2023 Ford Maverick will go into production this fall.