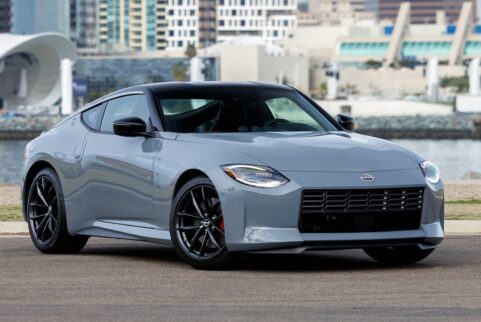 As has become commonplace, the automotive news headlines last month were dominated by electric vehicles and SUVs, but those (mostly) mainstream offerings were livened up by Nissan’s pricing announcement for its new Z sports car.

Lexus also pulled the wraps off a new RX crossover that promises to be the most driver-oriented version yet of a vehicle that is better known for smooth, quiet luxury.

In the EV arena, Genesis has revealed pricing for its first all-electric model, the GV60 compact crossover, and Cadillac has also announced what it will charge for its Lyriq BEV.

At the other end of Cadillac’s lineup is the Escalade-V, a high-performance take on the full-size SUV that will have nearly 700 hp when it goes on sale here.

Finally, Land Rover has added a third row of seats to its newest model, the Defender, turning it into an eight-seat adventure vehicle.

At the end of this year, Lexus will begin selling the fifth generation of its RX mid-sized crossover, which will come to market with a plug-in hybrid option and a new RX 500h F Sport trim that combines a turbocharged engine and hybrid power to create the model’s first-ever high-performance variant.

In the RX 500h F Sport, a 2.4L turbocharged four-cylinder engine will work with a high-capacity hybrid system to generate 367 hp and 406 lb-ft of torque, making it the most potent RX ever. It will also stand apart from other hybrid RX models past and present by putting its power through a six-speed automatic transmission instead of the continuously variable transmission (CVT) used in other Lexus and Toyota hybrids. Lexus says the RX 500h F Sport will be good for a 6.1-second 0-100 km acceleration time.

The 2.4L turbo four-cylinder will also power the entry-level RX 350 with 275 hp/317 lb-ft and an eight-speed transmission. The third RX powertrain option will be the RX 350h hybrid’s 2.5L engine and electric motors, which will make 246 hp/233 lb-ft. Finally, the RX 450h+ will feature the RX’s first-ever plug-in hybrid powertrain, details of which Lexus says it will reveal later.

Lexus has always pitched the RX as a competitor to European luxury SUVs – albeit as a more relaxed alternative — and now it looks more like them. The body is hunkered down over its wheels (which measure 19 to 21 inches, depending on trim) and hugs the ground, especially in RX 500h F Sport form.

The new RX’s striking new appearance comes thanks in part to the combination of a wheelbase 60 mm longer and a rear overhang that has been trimmed by the same amount, making the car the same length as before, but with tighter proportions.

More information about the 2023 Lexus RX, including pricing and the full lists of standard and optional features, will be released closer to the car’s launch at the end of this year.

Genesis Canada began selling its first all-electric model, the GV60 compact crossover, at the beginning of June with a starting price of $71,000.

The GV60 is the latest addition to the Hyundai Motor Group’s EV portfolio, following the Hyundai Ioniq 5 and Kia EV6, with which it shares its underpinnings.

Like its Hyundai and Kia siblings, the GV60 features a vehicle-to-load system that can power small household appliances with the electricity stored in the battery. The car’s other tech tricks are fingerprint and facial recognition scanners that will let you unlock and drive the car without a key.

For $79,000, a Performance trim boasts 429 hp and includes a boost mode that can generate 483 hp/516 lb-ft for short bursts of acceleration. Other Performance trim additions include 21-inch wheels, a massaging driver’s seat, electronically controlled suspension, a Bang & Olufsen stereo, and surround-view cameras.

This summer, Nissan will begin selling the seventh generation of its venerable Z sports car at a starting price of $46,498.

The 2023 Nissan Z (the car’s official name) is the first significant update to the Z-car line following the previous generation 370Z’s 13-year run.

Powering the new Z is a 3.0L turbocharged V6 making 400 hp and 350 lb-ft of torque, which comes mated to either a six-speed manual transmission or a nine-speed automatic.

Performance trim is available with a Proto Spec option package ($64,248 with the six-speed manual, or $65,798 with the automatic) that adds bronze wheels around yellow brake calipers, seats and doors with yellow accents, and unique interior stitching.

In May, Cadillac began taking orders for its forthcoming Lyriq BEV at a starting price of $69,898, which includes a single-motor rear-wheel drivetrain that will promise an estimated 502 km on a full charge of its 100-kWh battery pack. Notably, that price includes the destination charge.

As revealed earlier in the spring, the Lyriq RWD will derive 340 hp/325 lb-ft of torque from its rear-mounted motor. Cadillac says the first batch of Launch Edition Lyriq models will come standard with an onboard charging system capable of adding 84 km of range in an hour on a level 2 home charger. In later cars, that will be an optional upgrade from a standard charging system capable of adding 53 km per hour of charging. However, Cadillac says plugging into a DC fast charger will add up to 122 km in 10 minutes.

An all-wheel drive Lyriq with a second, front-mounted motor will arrive in early 2023 with about 500 hp on tap, but Cadillac has not announced its price or how far it will go on a charge. However, the company does say the Lyriq AWD will be able to tow nearly 1,600 kg (3,500 lbs).

In the Lyriq’s cabin, a 33-inch display serves up driver information and houses an infotainment system with Google Maps, Google Play and Google Assistant built in. Cadillac also offers a 19-speaker stereo with surround sound, but doesn’t specify whether it’s standard or an extra-cost option.

The 2023 Cadillac Lyriq RWD is scheduled to arrive in Canadian showrooms this fall.

In other Cadillac news, the brand will begin selling its first-ever high-performance SUV this summer when the Escalade-V arrives in Canadian showrooms.

Based on the full-size SUV that has been a mainstay of the Cadillac lineup for more than 20 years, the Escalade-V boasts 62 per cent more power than the regular version, thanks to a supercharged 6.2L V8 that’s good for 682 hp and 653 lb-ft of torque. Cadillac says the Escalade-V will do 0-100 km/h in 4.4 seconds, but will also boast a 3,175-kg towing capacity.

A magnetic ride control suspension will be standard. Optional in lesser Escalade trims, it’s adept at making this big SUV nimbler than its size suggests.

Inside, a 38.0-inch screen works as both the driver’s info display and the infotainment interface, which includes augmented-reality navigation. A 36-speaker sound system will be standard, as will the Super Cruise hands-free highway driving assist system.

Cadillac hasn’t published fuel consumption estimates for the Escalade-V, but it will almost certainly be thirstier than the current Escalade, which is rated for 16.3/12.7 L/100 km (city/highway).

The Land Rover lineup gains a new model for 2023 with the addition of the Defender 130, the first three-row version of the retro-inspired Defender introduced in 2020.

The Defender 130 builds on the four-door 110 model, adding a third row of seating in a body stretched by 340 mm. The Defender’s entry point remains the two-door 90 variant.

Land Rover says second- and third-row occupants benefit from stadium-style seats positioned higher than the ones in front to enhance passenger visibility. Meanwhile, a small sunroof over the third row complements the 130’s standard panoramic roof. The Defender 130’s way back can accommodate three people, making it an eight-seater.

Cargo space is limited to 389L with all three rows of seating in place. Folding the third row boosts storage volume to 1,232L, and 2,291L is available behind the front row when all rear seats are folded away.

An 11.4-inch touchscreen contains a navigation system that uses the what3words location platform, which allows you to navigate to any location based on the three-word phrase assigned to that spot on the globe. If getting there involves crossing a river or stream, the Defender 130’s air suspension can lift the body high enough to ford nearly a metre of water.

The Defender 130 is powered by a 3.0L six-cylinder mild hybrid powerplant that makes 395 hp and 406 lb-ft of torque that, working with an eight-speed transmission and standard 4WD, lets the truck tow up to 3,720 kg.