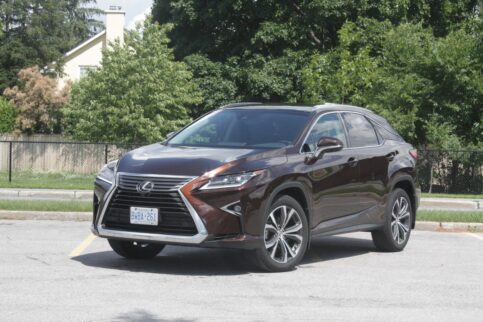 If you drive a late-model SUV from Honda, Lexus or Toyota, you’d better watch out. The Insurance Bureau of Canada (IBC) has compiled its annual list of the most stolen vehicles in Ontario and determined that popular models from those brands are among the ones most often stolen.

Car thieves adapt to changing market conditions by targeting vehicles they think they’ll be able to sell for the most profit. In Ontario in 2020, those models include the Honda CR-V, Toyota Highlander and Lexus RX compact and mid-size crossover SUVs.

That’s a change from recent years, when pickup trucks and large SUVs dominated the list. This is also the first year since the IBC has tracked Ontario auto theft stats that all the models on the list are five years old or newer. We’ll explain the reason for that later on.

First, we’ll get to the statistics, and then tell you how you can avoid becoming a victim of car theft.

You’ll notice a lot of repetition on these lists. That’s because the IBC doesn’t just count makes and models, but also the model years of the most frequently stolen vehicles, which is why some models appear multiple times.

The Top 10 Most Stolen Cars in Ontario

Who Steals Cars, and Why?

The IBC says high-end SUVs are popular targets for car theft rings that sell vehicles to overseas buyers for big profits. Some thieves also affix new vehicle identification numbers (VINs) to stolen cars and trucks to resell them domestically. In other cases, the vehicles are dismantled – or “chopped” – and sold for parts.

Another trend IBC identified is a growing number of sporty cars being taken so they can be used in illegal street racing.

Criminals also frequently steal cars to use when committing another crime. The police regularly find these vehicles abandoned after the fact, but they’re often badly damaged.

How Can You Avoid Becoming a Victim of Car Theft?

According to the IBC, a vehicle is stolen every six minutes in Canada. Not only is auto theft inconvenient when it happens to you, but it adds up to about a billion dollars annually in insurance, police, health care and court system costs that you end up paying for through your insurance premiums and taxes.

By contrast, the things you can do to try to prevent car theft are simple and much less expensive.

While thieves may have previously targeted older vehicles with fewer anti-theft measures, high-tech advancements are making it easier for them to take newer models with advanced passive keyless entry systems.

This convenient feature lets you open the car without touching the fob, but it also creates opportunities for car thieves. The fob communicates with the vehicle constantly if the two are within a certain distance of each other. Using inexpensive equipment easily bought online, thieves can intercept that signal and use it to unlock the car, start it and drive away.

To avoid becoming a victim of this type of theft, store your key fob far enough away from the car that the two can’t “talk” to each other. You can also keep the fob in a signal-blocking Faraday pouch or box. They’re inexpensive and easy to find online and in stores. Alternately, put your keys in a kitchen appliance – seriously: the fridge, freezer, oven or microwave will all work – whose metal shell will block the signal.

A side benefit is that the batteries in the fob will last longer because it’s not constantly pinging the car.

You can have an immobilizer installed in your car that will prevent it from being hotwired, an old-school method of car theft that involves bypassing the ignition switch. The immobilizer won’t allow the car to start until it receives a signal from a fob paired with it.

Another solution is installing a tracking device that alerts a monitoring service or the police if your car is taken.

Not all theft-prevention methods require technology. In wintertime, thieves watch for people who start their cars to warm them up and then go back inside the house to finish getting ready to leave. There are two ways to prevent this type of theft. The obvious one is to not leave your car running unattended. The other is to have a remote start system installed. These allow you to start the engine from indoors, but a thief won’t be able to drive it away without the key.