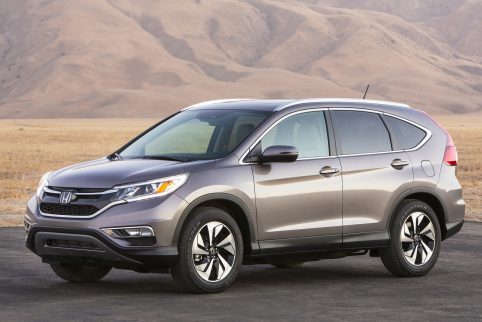 Crossovers and sport utility vehicles are no overnight sensation. Families have been flocking to this practical body style for about a decade now, thanks to the disappearance of station wagons and large sedans. That shift is no accident: Crossovers and SUVs command higher prices, making them more profitable for auto manufacturers.

Compact crossovers are the segment’s sweet spot, combining the space of a mid-size car or wagon with overall dimensions well-suited to city driving. Like SUVs of all sizes, compact utilities are commonly associated with traction-enhancing all-wheel drive, but many car manufacturers also offer these trendy vehicles with front-wheel drive. That’s a nod to budget-oriented shoppers looking for the lowest possible purchase price and the thriftier fuel economy that front-wheel drive vehicles often deliver.

For shoppers looking to save even more money by buying used, we’ve compiled a list of the five most fuel-efficient five-year-old compact utilities with front-wheel drive. That means we’re focusing on 2015 front-drive models with the lowest combined fuel consumption estimates according to the Natural Resources Canada fuel consumption guide.

You will note that this list is made up exclusively of models from Japanese brands. That’s purely by coincidence, but it does speak to the Japanese auto industry’s longstanding obsession with building fuel-efficient vehicles.

In 2015, Honda updated the CR-V with a new engine and continuously variable transmission (CVT), a combination that made it more powerful and efficient than the previous year’s model. Horsepower remained the same, at 185, but torque increased by nearly 20 lb-ft to 181, and the front-drive CR-V’s fuel consumption ratings of 8.6/6.9/7.8 L/100 km (city/highway/combined) were best-in-class in 2015.

As an added bonus for buyers who like to shop local, Honda has built the CR-V in Alliston, Ontario since 2012.

We’ll call the Mazda CX-5 the enthusiast’s choice in this list, because it’s the only one that came standard with a manual transmission. It was matched with the smaller of two engines, a 2.0L that makes 155 hp and 150 lb-ft of torque. That thriftiest combination is the one we’re focusing on here, but it’s worth noting that both the 2.0L and a more powerful 2.5L with Mazda’s automatic transmission are also among the top five most efficient vehicles in the CX-5’s class.

Mazda limited many popular convenience and comfort items — heated front seats, a sunroof, blind spot monitoring, rain-sensing wipers, and a backup camera — to the CX-5’s GS trim levels. Features like dual-zone climate control, larger wheels and passive keyless entry were only offered in GT trim, which was standard with AWD and, as a result, doesn’t qualify for inclusion here.

Nissan redesigned the Rogue into its second generation in 2014, so the 2015 model saw just a handful of minor updates. The basics stayed the same, including a 2.5L four-cylinder engine (170 hp and 175 lb-ft of torque) and an automatic CVT. The Rogue is the third-most-efficient vehicle among front-wheel drive compact utility vehicles; it’s also noteworthy for a seven-seat option, though it wasn’t offered in the S and SV trim levels that qualify for the Rogue’s inclusion here. 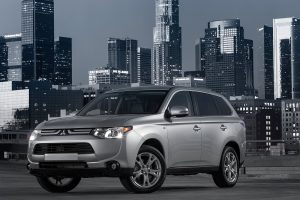 Like Nissan, Mitsubishi had redesigned its compact crossover model, the Outlander, in 2014, so the 2015 model received minor updates. Among the things carried over was its powertrain, consisting of a 2.4L four-cylinder engine (166 hp/162 lb-ft) and a continuously variable transmission. The front-wheel drive Outlander came in a single trim, the entry-level ES. The Outlander offered a seven-seat option, but like that in the Rogue, it couldn’t be had in combination with front-wheel drive.

We were surprised to discover that efficiency-obsessed Toyota’s RAV4 only just made it onto our list of the top five most efficient front-drive crossovers. Toyota had redesigned the RAV4 into its fourth generation in 2013, and the first-ever RAV4 gas-electric hybrid debuted in 2016. All 2015 models used a 2.5L four-cylinder engine (176 hp/172 lb-ft) and a six-speed transmission. Front-wheel drive was offered in LE and XLE trims.