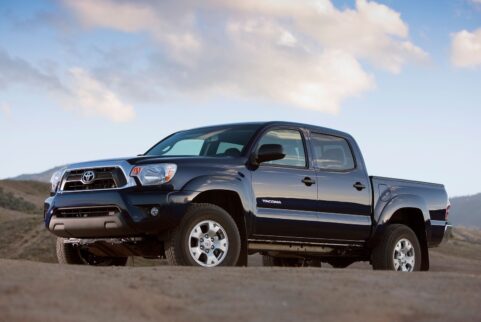 The mid-size pickup truck segment is a relatively new one, effectively created in 2015 when General Motors redesigned its Chevrolet Colorado and GMC Canyon models. The new trucks were larger and more refined, with interior space that qualified them for the mid-size designation instead of their predecessors’ compact classification.

Since then, other small trucks have grown up in order to keep up. These mid-size models can handle most of the tasks you might ask a full-size pickup to do, but in a more maneuverable package better suited to everyday driving, particularly in urban areas.

Despite their extra size and sophistication, today’s mid-size trucks are more efficient than the compacts that predated them – in some cases by a surprising margin.

In 2015, the Chevrolet Colorado and GMC Canyon were redesigned into their respective second generations, bringing significantly more refinement, interior space, and performance.

The new versions of the Colorado and Canyon we’re looking at use the optional 3.6L V6, whose 308 hp handily outpowers the 2012 model’s 3.7L inline five-cylinder while also promising a modest improvement in fuel economy.

The 2022 Colorado and Canyon start out in a basic WT (work truck) trim, but for many drivers, the one-step-up LT is a better starting point, with cloth upholstery (the WT trim has vinyl seats), a larger touchscreen, cruise control, and an auto-dimming mirror.

An interesting twist here is that GM’s 2012 mid-size pickups could be optioned with a V8 whose power matched that of the 2022’s V6, but with less-impressive fuel economy. Meanwhile, the 2022 offers a turbodiesel four-cylinder with a combined (city/highway) fuel consumption estimate of 10.1 L/100 km, which is second-best among all pickups after the new-for-2022 compact Ford Maverick.

*The old Ranger’s disappearance after 2011 means we’re looking back 11 years instead of 10 as we are with the other trucks in this article.

The Ford Ranger pickup enjoyed great success through three generations as a compact from the early 1980s to 2011. When Ford brought the Ranger name back in 2019, it had grown up into a mid-size truck, which left room for the company to add the new compact Maverick in 2022. But we’re comparing today’s mid-sizers to their closest analogues a decade ago, so we’ll save a new Maverick/old Ranger comparison for another day.

The 2022 Ford Ranger gets its power from a turbocharged 2.3L four-cylinder engine. That’s the same displacement as the old truck’s base engine, but with nearly double the power. The 2011 Ranger’s optional 4.0L V6 is the better match, but it still gives up a lot of power to the new turbo four-cylinder while using a lot more gasoline.

The new version of the Ranger is also better equipped than its predecessor, with standard A/C, an auto-dimming rearview mirror, and forward collision avoidance assist. Surprisingly, the base 2022 Ranger XL still comes with manually adjustable side mirrors, but now all Ranger trims are standard with 4WD, which was a pricey option in 2011.

Nissan redesigned its Frontier pickup in 2022, marking the truck’s first significant update since 2005. That changeover would have happened a couple of years earlier were it not for COVID-19-related delays. Shortly after the new Frontier arrived, it became Nissan’s sole pickup offering, following the disappearance of the full-size Titan.

The 2022 Nissan Frontier’s most significant advancement is its 3.8L engine, which offers better performance and fuel economy than the older model’s 4.0L.

The 2022 Frontier’s S trim remains a pretty simple truck, but with the added convenience of an 8.0-inch touchscreen with smartphone integration and adaptive cruise control. Like the 2022 model, the 2012 Frontier S came with A/C and keyless entry.

The Honda Ridgeline is the least rugged of the trucks we’re discussing here, as the only one built on a crossover chassis rather than the more traditional body-on-frame underpinnings. However, the formula has proven successful for Honda in combining a more car-like driving feel with the utility of its pickup bed.

The 2012 Ridgeline was part of the truck’s first generation, which was sold through the 2014 model year and then took a hiatus before the second-gen model arrived in 2017.

Mechanically speaking, the two generations of Ridgeline look similar on paper, but the newer model boasts more power and better fuel economy from its 3.5L V6, thanks in part to direct fuel injection.

Second-gen Ridgeline models preserved a few nifty features from the original, like a tailgate that you can either flip down or swing open to the side and a weatherproof trunk in the bottom of the cargo bed.

Toyota first used the Tacoma name for its entry-level pickup truck model in 1995, which it had previously marketed simply as the Toyota Pickup—the most famous example of which may be the 1985 model that appears in the Back to the Future movies.

By 2012, the Tacoma had grown enough to be classed as a mid-size model, up from the pre-Tacoma models’ compact status. Power was from a 4.0L V6 with 236 hp. It came standard with a six-speed manual transmission, but we’re using versions with the optional four-speed automatic to keep things in line with the majority of modern mid-size, V6-powered trucks, which come with automatics. The least-expensive 2012 V6-powered Tacoma was $27,900, though you could get a four-cylinder model for a lot less. By 2022, $40,350 was the Tacoma’s entry price, which gets you a stronger, more efficient 3.5L V6 and a six-speed automatic. The entry-level 2022 Tacoma comes equipped with heated seats, dual-zone A/C, smartphone integration, and a suite of driver safety assists.