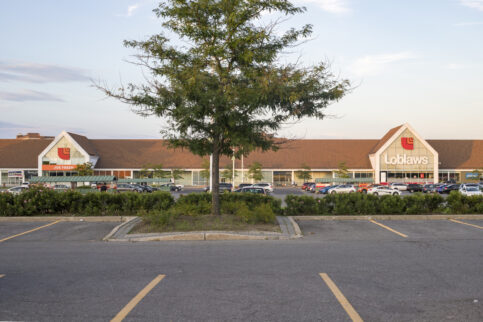 If you have an electric vehicle (EV), you’re probably used to scouting out charging points along your route. As charging infrastructure continues to grow in Canada, more companies are trying to break into the EV charging industry, giving drivers more options to avoid range anxiety.

This year, grocer and retail giant Loblaw Canada entered the charging arena by launching their own network: Plug + Charge.

What Is Park + Charge?

Branded by Landini Associates, Park + Charge is one of the newest additions to the North American charging network, presented by Loblaw. Construction of Plug + Charge stations began in the spring of this year, but Loblaw announced the official debut of their charging network in September 2022.

So far, Loblaw has focused on building five charging stations at stores across Ontario. One of the first of these stations is in Bayview Village in Toronto, which has been in operation since September. After these five points are completed, Loblaw will expand their network into the United States before returning to Canada.

Loblaw plans to have Park + Charge stations at every one of their stores across North America, allowing customers to charge up while they shop.

What Does it Cost?

EV charging rates can vary depending on the provider, location, power level, and the type of vehicle you drive. If you have a 120V outlet available, one of the cheapest ways to charge up is from the comfort of your own home. If you need to charge on the go, though, you can find a public charging station.

Many public charging stations are free to use. Even if you have to pay, you’ll spend a lot less at the charging port than you would at the gas pump.

Like most charging networks in the country, Plug + Charge currently bills customers for every minute their vehicle is plugged in. Support for charging to be billed based on kWh (kilowatt per hour) has been growing, however, so it’s possible Loblaw may remodel their billing strategy in the future. For more information on the difference between charging by kWh vs. time, check out this article.

Many companies have already made a name for themselves in EV charging. Tesla, FLO, and ChargePoint currently dominate the EV charging network in Canada. It’s unlikely Plug + Charge will come close to their numbers any time soon, but the Loblaw network has one angle they can use to their advantage.

Plug + Charge can offer EV drivers the convenience of being able to charge up at their local Loblaw store while picking up everything they need on their grocery list. This’ll appeal to customers on a tight schedule, allowing them to complete two errands in one outing. If consumer interest in EVs continues to climb, Plug + Charge stations could become a regular part of many drivers’ routines. For more news and tips on EVs, check out our blog.