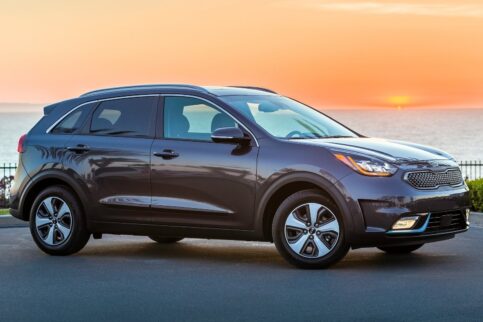 If gas prices are making you rethink your decision about switching to an electric vehicle, consider a hybrid. Out of the three types of hybrid vehicles (full, mild, and plug-in), we recommend plug-in hybrids as a great option for those interested in EVs but not ready to make the transition to all-electric.

To help you narrow down your options, let’s look at some plug-in hybrid electric vehicles worth considering for your next ride. All fuel consumption ratings are from Natural Resources Canada’s 2022 Fuel Consumption Guide and are given in gasoline litres equivalent per 100 km, or Le/100 km. If you buy any of these cars used, their fuel economy, fuel efficiency, and other specs may differ depending on their model year and how long they’ve been used for.

If you’re looking for a luxury car without the luxury price, check out the BMW 330e. From the BMW 3 Series, the 330e offers 288 horsepower, 3.5Le/100 km combined fuel economy, and roughly 475 km of total range on a full battery and tank. If you mainly drive within the city, you should be able to complete your commutes on electricity only with the 330e, saving the gas tank for those longer journeys.

For those looking to replace their gas-powered road trip vehicle, the Kia Niro plug-in should be on your list of options. This PHEV has a combined fuel economy of 2.2Le/100 km, a total range of 853 km, and enough room to fit all your travel essentials. Although it’s on the smaller side of the SUV size spectrum, some people feel the price and ability to complete their journey primarily on electricity make it a fair trade.

The Toyota Prius Prime is one of the most affordable hybrids on the market. This second-generation, 5-passenger hatchback packs 164 horsepower and can travel up to 995 km before needing a pit stop. Although some reviews claim it doesn’t offer the most exciting driving experience, with an impressive combined fuel economy rating of 1.8Le/100 km, the Prius Prime stands out as a great starter hybrid car for those especially concerned by gas prices.

Hyundai is considered one of the leading manufacturers for PHEVs sold in Canada. The Ioniq plug-in has a total range of almost 1000 km on a combined fuel economy of 2 Le/100 km—making its popularity easy to understand.

If you’re a fan of the Hyundai brand, check out their other two PHEV models: the Tuscon and the Santa Fe. Both of these cars were released in 2022, however, while the Ioniq PHEV’s first year was 2017, so expect a higher price point.

In 2018, the Mitsubishi Outlander PHEV was the best-selling PHEV in the country. If you start with a full battery and tank, this SUV can take you 470 km on a combined fuel economy of 3.2Le/100 km. One reason the Mitsubishi stands out is it’s one of the few PHEVs that can be charged at Level 3 fast chargers. This is a great option for those who are frequently on the road and want to charge up quickly to get back to their adventures.

Any time you shop for a used car, go through a reputable source and be wary of curbsiders. If you’re interested in buying a new car, organize your finances first to determine exactly how much you have to spend. If you go for an EV, don’t forget to take advantage of the tax credits and financial incentives available.