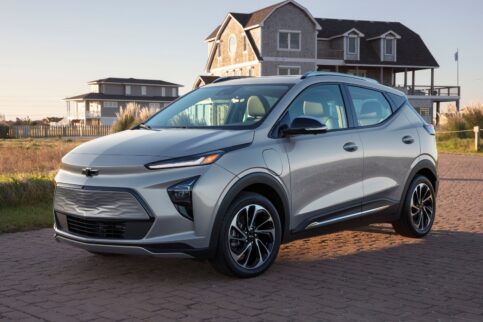 If you’re waiting for electric vehicle prices to drop closer to those of conventional gasoline models, we hope you’re patient.

EV prices are dropping, but it’s happening slowly. Regardless of what type of vehicle you want, you won’t find much for less than $40,000 – at least, not before any government rebates available in your area.

Raise your price limit to $50,000, however, and you’ll find that not only can you get an EV, but you can get it packaged in a trendy crossover body style.

We’re focusing on MSRPs here, because rebates differ depending on where you live in Canada. All of the vehicles in this article are eligible for a $5,000 rebate under the federal government’s iZEV program. If you live in B.C., Quebec, or Nova Scotia, you’re eligible for additional rebates offered by those provincial governments. As we write this, the only incentive available in Ontario is Plug’n Drive’s rebate for used EV purchases (https://www.plugndrive.ca/electric-vehicle-incentives/).

Here are the crossover utility vehicles available in Canada right now with a starting MSRP of less than $50,000.

The Bolt EUV is a new addition to Chevrolet’s compact EV range. Keen to capitalize on the already-established Bolt hatchback, this new crossover’s suffix stands for “electric utility vehicle.”

The EUV shares a lot of components with the regular Bolt EV, including a 200-hp electric motor that powers the front wheels alone and a platform based on GM’s BEV II architecture. Its 2,675-mm wheelbase and 4,306-mm overall length are both longer than the Bolt hatchback, but despite being branded a utility vehicle, the EUV boasts only a few millimeters more height and ground clearance. And like many electric crossovers priced at the lower end of the EV cost spectrum, the Bolt EUV does not offer an AWD option.

A 65-kWh battery promises 397 km of range, and Chevrolet estimates the EUV’s energy consumption at 1.9 Le/100 km in city driving and 2.3 Le/100 km on the highway. Chevy says a DC fast charger will give the EUV enough juice for nearly 160 km in about half an hour.

Hyundai Introduced the Kona Electric in 2019, a year after a gas-powered version became one of the most popular vehicles in the subcompact crossover segment. Pictured is the updated 2022 Kona Electric, but as of this writing Hyundai had not published pricing, so we’re using the MSRP for the 2021 version.

Kona Electric uptake has been less enthusiastic, but that’s attributable to its higher starting price and a lack of public charging infrastructure. But for early adopters, the battery-powered Kona boasts the same impressive build quality as the gas model.

Under the Kona Electric’s hood is a 201-hp motor fed by a 64-kWh battery that promises 415 km of driving range. Hyundai says a full charge takes about 9.5 hours on a level 2 charger, but the Kona Electric can take on 80 per cent charge in as little as 54 minutes when connected to a DC fast charger.

The Niro arrived in Canada in 2017 as a compact wagon/crossover with a gas-electric hybrid powertrain, and the EV followed in 2019. There’s also a third version of the Niro with a plug-in hybrid system.

Kia is a subsidiary of Hyundai, which is why the Niro EV shares its powertrain with the Kona Electric. That means you get a 64-kWh battery and a 201-hp motor powering the front wheels. Charging takes around 9.5 hours on a level 2 connection, and a DC fast charger will power up the Niro EV in about an hour.

After an emissions scandal scuttled Volkswagen’s reputation in the diesel car segment, the company pivoted to EVs in a bid to clean up its act, literally and figuratively.

The ID.4 compact crossover is the first in what will eventually be a full range of electric vehicles. It follows the e-Golf, a now-defunct battery-powered version of the brand’s compact hatchback that introduced VW loyalists to plug-in technology.

Volkswagen offers the ID.4 with two distinct powertrains: The base Pro trim powers the rear wheels with 201 hp, and a Pro AWD upgrade adds a second motor at the front wheels and boasts 302 hp.

As we write this, Volkswagen has only published full technical specs for the base RWD model. It comes with an 82-kWh battery pack that VW says is good for 400 km of driving range, and the company estimates energy consumption at 2.3/2.6 Le/100 km (city/highway). Charging takes 7.5 hours on a level 2 connection. A DC fast charger allows the ID.4 to take on an 80 per cent charge in 38 minutes, and VW says that adding enough juice to go 100 km takes about 10 minutes.