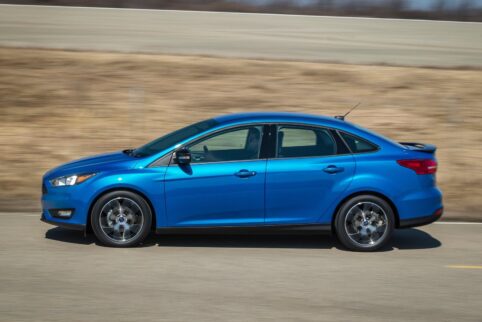 Compact cars are still an important part of the Canadian auto marketplace, but you wouldn’t know it if you visited a General Motors, Ford or Dodge dealership. These domestic brands, formerly known as the Big Three, have abandoned most of their car models in favour of satisfying the market’s appetite for SUVs.

That makes the used-car market the only place you’ll find a compact sedan or hatchback wearing the name of a domestic automaker.

At one point, the Ford Focus was one of Canada’s most popular compacts, having replaced the Escort around the turn of the millennium. In the early 2010s, the Chevrolet Cruze replaced the Cavalier, another long-running model that enjoyed strong sales. And in 2016, Dodge rolled out the Dart compact sedan, which replaced the blocky Caliber hatchback, which itself was a replacement for the Neon.

Ironically, what these domestic cars all have in common is European origins: the Chevy Cruze shares DNA with the Opel Astra, the Dodge Dart is related to the Alfa Romeo Giulietta, and Ford sold the same third-generation Focus we discuss here at its European dealers.

Ford introduced the third-gen Focus compact to North American buyers in 2012. It disappeared after 2018, a victim of Ford’s decision to concentrate on its SUV and crossover models. Sedan and hatchback models shared a 2.0L four-cylinder engine (160 hp/146 lb-ft of torque), a standard six-speed manual transmission, and an optional six-speed dual-clutch automatic. Starting in 2016, Ford added a 1.0L turbocharged three-cylinder engine with 123 hp and 125 lb-ft.

Ford also offered an all-electric Focus, and high-performance ST and RS versions, but for this article, we’re only looking at cars with the 2.0L engine.

The Focus’s most high-profile trouble spot is its optional dual-clutch automatic transmission. This high-tech design promised – and usually delivered – smooth shifting, but it generated complaints from drivers related to performance and reliability. As early as 2011 – the year the 2012 Focus was launched – Ford has issued a service bulletin to update the transmission’s control software. Some Focus drivers complained about rattling and grinding noises.

If you are shopping for a Focus with the automatic, look for one that has received proper maintenance. If you find a used Focus whose transmission has been replaced recently, that might be even better.

During your test drive, pay attention for any changes in how much effort is needed to turn the steering wheel. There are reports of binding in the steering rack mechanism, and correcting it requires replacement parts.

Another thing to watch for during a used Focus test drive is a clunk or rattle sound from the front suspension.

Other items to test include the Sync infotainment touchscreen. Move between the system’s various menus, watching for any delayed responses or spontaneous restarts, which could indicate software problems. Try out the air conditioning, too, including the automatic temperature control function that was an option in the Focus.

In 2016, Chevrolet launched the second and final generation of its Cruze compact car, which was available as a sedan or hatchback. Most pre-owned Cruze models you’ll find use a 1.4L turbocharged four-cylinder engine making 153 hp and 177 lb-ft of torque. Starting in 2017, Chevrolet began offering a 1.6L turbodiesel that generated 137 hp and 240 lb-ft; at the time, Chevy claimed the Cruze diesel was the most efficient non-hybrid car in highway driving.

Both Cruze engines came standard with a six-speed manual transmission; in gas models, a six-speed automatic was the option, while diesels got an optional nine-speed auto.

The Chevrolet Cruze was covered by a GM service bulletin regarding one or more damaged pistons in the engine. Symptoms include a check engine light, and an engine that runs rough and/or stalls. Here’s the service bulletin and here’s some more reading. Some Cruze owners suggest using premium-grade (90 or 91 octane) gasoline may help prevent this issue, even though Chevrolet says the car is designed to run on regular (87 octane) fuel.

In manual-transmission Cruze models, watch for a clutch pedal that doesn’t spring back up after you shift. This could indicate a failed hydraulic slave cylinder.

When looking at used Cruze models, check for water in the spare tire and battery wells under the trunk floor. Water leaks around the centre brake light and optional spoiler are known issues in these cars.

If you notice a Chevrolet Cruze with the six-speed automatic transmission doesn’t shift into sixth gear in highway driving in cold, damp weather, that’s apparently normal and is intended to reduce condensation in the engine’s intake system. Read more about this issue here.

Dodge revived the Dart nameplate in 2013 for an all-new compact sedan that replaced the blocky Caliber hatchback. The Dart’s engine options were all four-cylinders: a 2.0L made 160 hp and 148 lb-ft of torque; a 1.4L turbo generated the same 160 hp but boasted 184 lb-ft; and a 2.4L promised 184 hp and 171 lb-ft. A six-speed manual transmission was standard in most trims, and a six-speed automatic was optional.

Some Dart owners describe harrowing situations where their cars stall in traffic, leaving them vulnerable to collisions. Apparently, this is a feature – not a bug – built into the car to protect the engine when it runs low on oil. Before you begin your used Dart test drive, check the engine oil; if it’s low, that could be a sign the car has an oil consumption problem, which is also a known issue in the Dart.

We also recommend making sure all of the Dart’s electronic features work. Operate every button, switch and lever in the cabin, and note any that don’t do what they’re supposed to. Many Dart trims came with an infotainment touchscreen, which you should play with to make sure it responds quickly and doesn’t freeze up or randomly reboot.