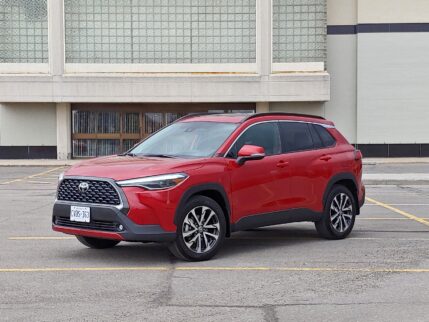 Toyota made its first foray into the subcompact crossover segment in 2018 with the C-HR, which still stands out today for styling that is uncommonly daring not just for the carmaker, but for the class in which it competes.

Toyota’s second entry in this fast-growing vehicle category is the Corolla Cross, a vehicle that aims closer to the middle of the road among subcompact SUVs with more mainstream styling, a more practical interior, and, of course, by capitalizing on the well-known Corolla nameplate.

The Corolla Cross’s standard engine is a 2.0L four-cylinder borrowed from the Corolla sedan and hatchback that makes 169 hp and 151 lb-ft of torque. It comes standard with a continuously variable automatic transmission (CVT).

L and LE trim levels start with front-wheel drive that you can option with AWD, while the top XLE configuration includes AWD.

Mid-grade LE models add a blind spot monitor, rear cross-traffic alert, passive keyless entry, an 8.0-inch touchscreen, a heated steering wheel, automatic A/C, and 17-inch alloy wheels. To this configuration, you can add a premium package of a sunroof, wireless phone charging, and roof rack side rails. The LE configuration’s entry price is $27,090 with FWD and $28,490 with AWD.

Toyota’s 2.0L engine is among the subcompact crossover class’s most powerful base powerplants. That distinction is academic, though, given the Corolla Cross’s 169 hp is only about 20 hp more than most of its competition can boast.

Acceleration is adequate, with the CVT doing a good job of managing the engine’s power, and responding with a prompt downshift when you ask for acceleration in highway driving. All that I’d ask for is gutsier low-end performance, which you can get from some of the competition’s optional engines: The Chevrolet Trailblazer’s tiny 1.3L turbo cranks out 174 lb-ft, while the large non-turbo four-cylinders offered in the Mazda CX-30 and Subaru Crosstrek make 186 lb-ft and 174 lb-ft, respectively. The Corolla Cross does fine with its 151 lb-ft, but has to work a little harder to keep up with highway traffic.

Meanwhile, the Corolla Cross’s suspension provides a commendable combination of ride comfort and nimble handling. And while this car’s appearance makes it look substantial, it’s actually 156 mm shorter tip to tail than a Corolla sedan, making it easy to maneuver in city driving and busy parking lots.

I’ve found some recent Toyota models lacking in front-seat headroom, but the Corolla Cross offers good clearance even underneath the XLE’s standard sunroof. The same goes for the rear seats, where taller riders fit comfortably without having to slouch, though they may wish for more legroom if they’re seated behind another tall person up front.

The Corolla Cross’s seating position is high relative to the road, but the combination of a high beltline and shallow greenhouse gives the impression of sitting down low in the car, which will either feel cozy or claustrophobic, depending on your preferences. A taller roof would allow a wider range of drivers to get comfortable behind the wheel.

While the Corolla Cross is 44 mm (1.7 inches) wider than the Corolla sedan, fitting three adults across the rear seat is not much more comfortable.

The Corolla Cross’s most notable interior advantage is its cargo capacity, which handily outdoes the Corolla’s other body styles and is made even more practical by folding rear seats that form a nearly flat load floor all the way to the front seatbacks.

While the Corolla Cross is already a compelling addition to the busy small-crossover landscape, Toyota’s offering is about to get even more interesting with the launch later this year of a hybrid version as a 2023 model. Not only will it promise better fuel economy – Toyota estimates a combined consumption rating of 6.4 L/100 – but it will also appeal to shoppers seeking more performance with 194 hp from its gas-electric powertrain.

For now, the Corolla Cross puts Toyota smack in the middle of a fast-growing segment, with respectable highway performance and fuel economy, and useful interior comfort and space in a small footprint well suited to city driving. But as well-executed as the Corolla Cross is, the forthcoming hybrid version will be worth the wait for its extra power – especially the added low-end torque of its electric motor – and impressive real-world fuel economy.