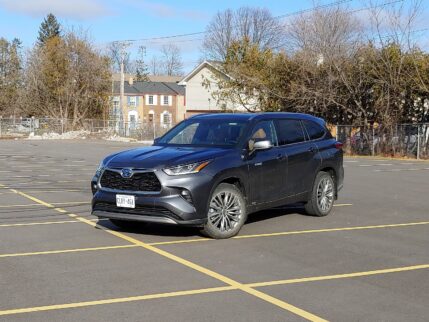 In 2001, the mid-size crossover SUV segment was still new, with Toyota’s brand-new Highlander facing off against Hyundai’s first mid-sized entry, the Santa Fe. Meanwhile, the Nissan Pathfinder and Ford Explorer were still closer to trucks than SUVs, the Honda Pilot was a couple years away, and General Motors didn’t get into this segment until 2007 with the GMC Acadia.

Two decades later, the mid-size crossover segment has grown a lot, and so has the Toyota Highlander, whose fourth generation arrived in 2020. Though it started in 2001 out as a five-seater, the Highlander is now sold exclusively with three rows of seats.

The Highlander is Toyota’s largest crossover model, but it doesn’t feel especially roomy inside. There’s no surplus of headroom in any of the three rows, and the second row is low to the floor, probably to preserve as much headroom as possible. There’s so little space in the third row that you’ll wonder why Toyota bothered putting seats back there.

However, none of that means you’ll necessarily be uncomfortable inside the Highlander. My test vehicle came dressed in top-end Limited trim ($52,150 to start, or $54,150 with a hybrid powertrain), which gets leather upholstery, heated/ventilated front seats, a heated steering wheel. On top of that was a Platinum option package that added heated second-row seats.

The Platinum bundle also includes a 12.3-inch touchscreen in place of the standard 8.0-inch display. It contains most of the car’s audio controls and can also show redundant climate functions. XLE trim and up has three-zone climate control, with rear-seat controls located at the rear of the centre console. If you want to take over from the front, the touchscreen is the only way.

It’s all easy to navigate, and supports Apple CarPlay and Android Auto so you can project your smartphone and its familiar apps onto the screen instead of using Toyota’s navigation and music interfaces. My only complain is that the volume and tuning dials are small and hard to get a grip on.

Another thing about the Highlander Hybrid that will keep you comfortable is its soft ride. It’s a sharp contrast with one of Toyota’s closest competitors, the Honda Pilot. If you want a suspension that better controls the Highlander’s body motions, an XSE package promises a sport-tuned setup, but you can’t get it with the hybrid powertrain.

Gas Highlanders come with front- or all-wheel drive, but the hybrid only comes with AWD, because it uses a different setup than the gas-powered version. The rear wheels are driven by a dedicated electric motor, so there’s no driveshaft connecting them to the transmission up front.

The smooth ride goes well with the way Toyota’s gas-electric hybrid system drives the car. When Toyota redesigned the Highlander last year, it switched out the hybrid’s V6 gas engine for a four-cylinder. The result is a bit less power – 243 hp in the new model versus 306 hp for the old V6 hybrid – but the electric motor’s torque helps cover that up by providing good acceleration in city driving. I felt the four-cylinder’s lower power output most in hard acceleration.

The new engine’s real benefit is its improved fuel economy. Toyota’s estimates for the new Highlander Hybrid are 6.6/6.8 L/100 km (city/highway), a big improvement over the old model’s 8.1/8.5 L/100 km (city/highway) ratings. That difference showed up in the real world: When I tested a Highlander Hybrid in 2017, I saw an average of 8.6 L/100 km in a week of early-summer city driving. I drove this new version in winter weather, and it averaged 7.6 L/100 km. That trade-off – a little less power for better fuel economy – is a worthwhile one.

The Toyota Highlander is a fine example of a mid-size crossover, with its comfortable ride and nicely finished cabin. However, only the hybrid version stands out in a segment where gas-electric power is just starting to take hold. The latest Ford Explorer introduced a hybrid option last year, and the all-new 2021 Kia Sorento will soon be available with a hybrid powertrain.

But if you’re set on a hybrid Toyota with useful space for seven or eight people, the less-expensive Sienna minivan is a better bet. It uses the same efficient powertrain as the Highlander Hybrid, and you can get it with AWD, too.