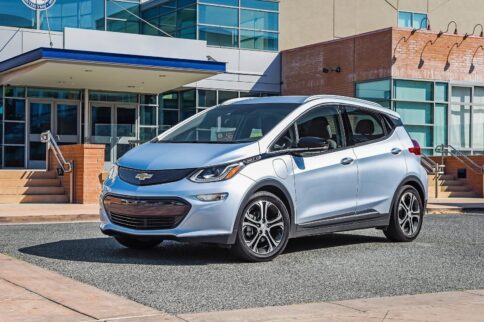 If you’ve been following our coverage of Natural Resources Canada’s (NRCan) list of the most efficient vehicles, you’ve probably read our articles about the conventionally powered car and SUV/truck models that use the least fuel.

For our third and final instalment, we’re moving into the newer territory of plug-in electric vehicles. NRCan splits the list of plug-ins in two: pure electrics, or EVs, driven by electric motors only; and plug-in hybrid electric vehicles, or PHEVs, which have a smaller battery that provides a limited amount of electric driving range and a gas engine that activates when the battery runs low.

The plug-in section of NRCan’s list includes some of the auto industry’s most interesting cars, as well as some brands you won’t find anywhere else. For example, three Tesla vehicles qualify here, as well as two from a little-known brand called Karma.

What does the Le/100 km energy consumption rating mean?

If you live in Ontario and have spent any time looking at your monthly hydro bill, you’ll be familiar with the kWh unit that’s commonly used to measure household electricity consumption.

The auto industry uses that unit too, measuring electric vehicle efficiency in terms of kWh/100 km. However, to make it easier to compare an EV’s efficiency to that of a combustion-powered model, there’s also a standardized Le/100 km (litre equivalent) energy consumption unit, where 1 Le/100 is equal to 8.9 kWh of electricity. It’s a similar approach to that of the U.S. Environmental Protection Agency (EPA), which measures EV economy in MPGe.

When it comes to PHEVs that have electric and combustion power sources, the regular L/100 km measurement is used to evaluate how efficient those vehicles are when their gas engines are running.

What criteria does NRCan use for its vehicle size classifications?

NRCan groups vehicles based partly on body type, but also according to interior volume. So among plug-in cars, the upscale Polestar 1 and Karma models we discuss below fall under the minicompact and compact headings, respectively, despite looking more like mid-size cars based on their exterior dimensions.

And now, here are the most energy-efficient plug-in vehicles available in Canada for the 2021 model year.

Launched in 2019 as a 2020 model, the Polestar 1 plug-in hybrid coupe was the first car from this Volvo offshoot, which specializes in plug-in vehicles.

NRCan categorizes the Polestar 1 as a minicompact based on the limited space in its snug four-seat interior, and this two-door is tops among plug-ins in that class – because it’s the only one.

The Polestar 1 boasts 619 hp and 738 lb-ft of torque from its combination of a 2.0L turbo- and supercharged four-cylinder engine driving the front wheels and two electric motors powering the rear axle. Along with those supercar-like power numbers comes a prestige-car starting price of nearly $200,000.

The most efficient subcompact plug-in models for 2021 are a pair of cars made by a boutique automaker called Karma Automotive. It’s the present-day iteration of a brand that used to be called Fisker, whose best-known model was called the Karma.

The Karma GS-6 and Revero GT are essentially the same car, conceived for different price points. The Revero GT goes for around $200,000, and the GS-6’s entry point is around $84,000. They share a turbo three-cylinder gas engine that works as a generator for an electric drive system promising 98 km of battery range and a total driving range of 428 km when you factor in the combustion engine. When the battery runs out and the engine comes on, Karma’s fuel consumption estimates are 8.8/9.5 L/100 km (city/highway).

Canada’s most efficient mid-size plug-in car is the all-electric Tesla Model 3. This is another example of NRCan’s vehicle classifications not lining up with those of the auto industry: the Model 3’s exterior dimensions make it a compact, but it has enough cabin space to move it into the energy regulator’s mid-size grouping.

The energy efficiency winner in the Model 3 lineup is the Standard Range Plus version, which promises 423 km of driving on a charge of its battery. This version of the Model 3 has a 283-hp electric motor powering the rear wheels, which the company says is good for a top speed of 225 km/h and a 0-100 km/h sprint in 5.6 seconds.

If you’re looking for maximum efficiency in a full-size car, NRCan says the Tesla Model S is best in its class. The Model S is a large hatchback in a similar vein as the Porsche Panamera or Audi A7, with seating for five and a large cargo area.

Interestingly, the most efficient Model S is also the most powerful: The Performance trim has 778 hp (more than a Dodge Challenger Hellcat), can do 0-100 km/h in 3.2 seconds, and promises as much as 663 km of driving range on a full charge.

Two cars qualify for top spot in NRCan’s small station wagon category. The Chevrolet Bolt and Kia Soul EV’s energy consumption ratings aren’t identical – the Chevy’s ratings are 1.9/2.2 Le/100 km (city/highway), while the Kia’s are 1.8/2.3 – but by NRCan’s math, those figures work out to the same 2.0 Le/100 km combined rating.

In the Bolt, an electric motor drives the front wheels with 200 hp and 266 lb-ft of torque, and the 66-kWh battery promises 417 km when fully charged. Chevrolet’s base MSRP is $44,998 before applicable government rebates.

The Soul EV, meanwhile, comes with a choice of two electric powertrains, the less potent of which gets NRCan’s efficiency nod. It has a smaller battery (Kia doesn’t say how much energy it can store) that promises just 248 km of driving and powers the front wheels with 134 hp and 291 lb-ft of torque. The Kia’s price is about $2,000 lower than that of the entry-level Bolt.

This entry in NRCan’s list of the most energy-efficient EVs comes with a caveat, because you can no longer buy the Standard Range version of the Tesla Model Y that made the number-one spot among small SUVs. Tesla introduced this entry-level Model Y trim in January 2021 and discontinued it about six weeks later.

However, that doesn’t disqualify the Model Y, because the former number-two vehicle in the class is a Long Range version that is nearly as efficient and slides into the top slot. Tesla says the Model Y Long Range’s dual motors make 480 hp and promise 525 km of driving on a single charge, a top speed of 217 km/h and a 5.0-second sprint to 100 km/h.

In NRCan’s standard SUV category – what the industry more commonly calls a mid-size – the Tesla Model X is the thriftiest plug-in model. Thrifty is a relative term here, however, as the Model X starts at $125,000.

Tesla has tweaked the Model X’s lineup since NRCan compiled this list, and the company no longer offers a configuration called Long Range Plus. However, the Long Range model is close, with 580 km of promised driving range (down 17 compared to the Plus version) and the same energy consumption ratings.

The Model X’s most attention-getting feature is its pair of rear “falcon wing” doors, which open upward on top-mounted hinges to provide access to the rear seats, including an optional two-place third row.

The final entry on NRCan’s list of the most efficient plug-in vehicles for 2021 is the Chrysler Pacifica Hybrid. At its introduction in 2017, it was Canada’s first-ever hybrid minivan. Today, it remains the only plug-in minivan, but faces competition from Toyota’s redesigned 2021 Sienna, which comes standard with a conventional hybrid powertrain. In the Pacifica Hybrid, power comes from a 3.6L V6 engine and an electric motor that work together for 260 hp. The electric motor makes 119 hp on its own and is fed by a battery Chrysler says is good for 51 km of electric range before the gas engine comes on; when it’s running, Chrysler’s fuel consumption estimates are 8.0/7.9 L/100 km (city/highway).