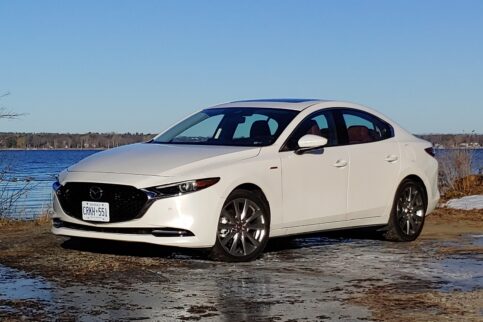 For a number of years now, Mazda has been making a measured move upmarket. I would argue it started with the original Mazda3 in 2004, a compact car that looked, felt and drove like something more sophisticated.

Mazda made its intentions overt more recently when it added top-end Signature trim lines to its CX-5 and CX-9 crossover models. But the culmination of the company’s effort to stand out by moving up comes full circle this year with the 2021 Mazda3 100th Anniversary Edition.

Named to commemorate the company’s founding a century ago, the Anniversary trim packs in features that are optional in many more expensive cars.

That’s no accident: Mazda says sales of the Mazda3’s former top GT trim have been creeping upward for the last few years, and made up 45 per cent of the model’s sales in 2020. The company decided to take advantage of that with the new 100th Anniversary trim, which includes as standard several features that are optional in the GT.

What Upgrades Come in the 2021 Mazda3 100th Anniversary Edition?

The new model is standard with a turbocharged engine and all-wheel drive, both of which you can pay extra for in the Mazda3 GT. It also comes with a suite of features that make up the GT’s optional Premium Package.

Mazda’s 2.5L turbo engine is all about torque, cranking out 310 lb-ft at 2,000 rpm on regular fuel, along with 227 hp. (Power increases to 250 hp and 320 lb-ft on premium-grade gasoline.) That’s a lot of power for a compact car, but this is not a follow-up to the Mazdaspeed3 of 2013. Where that car delivered ferocious turbocharged power through its front wheels, the new turbo’s performance is more laid back and benefits from the added traction of all-wheel drive.

This car may be able to keep up with a VW GTI or Honda Civic Si, but you won’t get much of a thrill doing it. Mazda uses the turbo’s power for effortless acceleration and to make its small sedan feel more luxurious. Even at full throttle, the Mazda3 turbo feels calm and composed as it runs from 0-100 km/h in a speedy six seconds (according to Car and Driver magazine).

However, if you prize nimble handling over power, choose a Mazda3 GS with the non-turbo 2.5L and front-wheel drive, which is 120 kg lighter – a big difference in a small car.

Still, the Mazda3 Turbo was plenty of fun to push through some of my favourite corners, and felt nicely composed while doing so.

In the past, I’ve complained about lazy performance from the Mazda3’s automatic transmission, which takes some of the fun out of the drive. That’s less obvious here because of the turbo engine’s generous low-end torque. A sport drive mode also livens things up by holding lower gears and making the throttle more responsive.

If you’re cross-shopping the Mazda3 against other compact cars, one thing you’ll notice is its snug interior. Competitors like the Honda Civic, Hyundai Elantra and Subaru Impreza have grown to offer mid-size interior volume, and those cars make the Mazda3’s cabin feel tiny in comparison. Front-seat space is all right, but adults in the rear get leg- and headroom closer to that of a subcompact.

Trunk space is more impressive. It looks larger than the cargo area in the Mazda3 Sport hatchback, even though Mazda’s measurement shows a smaller volume.

If a quality look and feel mean more to you than space, the 100th Anniversary package pairs red leather seats with white dash trim for a cabin that matches the price tag.

Mazda’s infotainment system loses points with me for making it an annoying three-step process to manually select from SiriusXM’s vast library of satellite radio stations every time you want to change the channel.

And my test car’s winter floor mats, which come from Mazda’s list of factory accessories, are surprisingly slippery under wet boots or shoes.

My test car is the most expensive version of the Mazda3 sedan by a wide margin, at $36,100. Upgrades over the next-best GT trim ($28,500) include the turbo engine and AWD; rear collision detection and automatic braking; 360-degree camera views; traffic jam assist; an auto-dimming driver’s side mirror; a wiper de-icer; front and rear parking sensors; a frameless rearview mirror with garage door remote; and a head-up driver display.

At its price, the Mazda3 100th Anniversary trim faces little competition from other compact cars. Instead, this is Mazda’s attempt to lure shoppers away from AWD compact luxury cars. The Mercedes-Benz A-Class, BMW 2 Series Gran Coupe, and Audi A3 (with optional Quattro AWD) are all more expensive to start and only get pricier when you equip them to match the Mazda.

On paper, it can be hard to see the value in any $36,000 compact sedan, never mind one that doesn’t bear an upscale brand name. However, the Mazda3’s 100th Anniversary package makes a strong first impression that only improves when you get in and start driving.

If you have your eye on one of Germany’s entry-level sedan models, stop by a Mazda store on your way. You may find you don’t have to look any further.