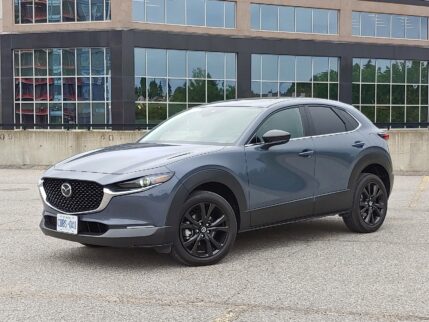 Last year, Mazda introduced the CX-30 subcompact crossover to fill a gap between its CX-3 and CX-5 SUV models, strengthening the company’s presence in a class where the CX-3 is a bit too small, being based on a tiny Mazda2 hatchback sold in other parts of the world.

Despite its similar name, the CX-30 is completely different from the CX-3, instead sharing its underpinnings with the Mazda3 compact car. Like most of Mazda’s models, the CX-30 goes for an upmarket look and feel compared to its direct competitors.

Mazda moves its newest crossover model another notch upscale for 2021 with the CX-30 Turbo. As with the Mazda3 and CX-5 before it, the turbo option prices the CX-30 out of competition with its numerous mainstream counterparts, which include the Honda HR-V, Nissan Qashqai, Hyundai Kona and Chevrolet Trailblazer. But the CX-30 Turbo’s price is still thousands less than what brands like BMW, Mercedes-Benz, Audi, and Volvo ask for their small SUVs with similar performance specs.

The Mazda CX-30 was already a compelling choice among both mainstream and upscale small utility vehicles. Does the addition of turbo power give the CX-30 what it takes to make it a full-fledged member of the upscale subcompact SUV segment?

The CX-30’s turbo engine is the same 2.5L Mazda offers in most of its other vehicles. It makes 250 hp and 320 lb-ft on premium gasoline, or 227 hp/310 lb-ft on regular. With either grade of fuel in the tank, the CX-30 Turbo boasts effortless acceleration in normal driving, thanks to that generous torque rating.

While the CX-30 Turbo is the quickest version of this crossover, the engine makes most of its power at relatively low revs. There’s a certain refinement that comes with being able to accelerate with so little fuss. The 300-hp versions of the BMW X2 and Mercedes-Benz GLA promise more excitement, but you’ll pay more than $52,000 for it in either case.

In the CX-30 Turbo, you can choose between normal and sport drive modes to suit your driving style, with sport mode increasing the drivetrain’s responsiveness. I found it wasn’t always in the gear I wanted for spirited acceleration, but I fixed that by using the transmission’s manual shift mode.

One of the CX-30 Turbo’s most significant limitations might be its 48L fuel tank. Most of Mazda’s competitors have similarly sized tanks, but the CX-30 Turbo’s higher city fuel consumption means you’ll be filling up more frequently, a price you’ll have to weigh against the top CX-30 model’s extra performance.

If you’re considering the CX-30 because of Mazda’s reputation for fun-to-drive vehicles, you won’t be disappointed. It handles well enough to make you forget about the car’s pumped-up ride height and elevated seating position and feels like it could keep up with more expensive small European crossovers on twisty back roads.

If you want even sharper handling responses, consider the Mazda3 Sport: It offers a bit less cabin space, but is available with the same three engines as the CX-30 and boasts better handling thanks to its lower suspension.

The CX-30’s ride is firm but comfortable. The suspension does a decent job of keeping road noise out of the cabin at highway speeds, but on rough pavement you’ll hear some clunking and clomping sounds that take away from the car’s otherwise upscale demeanour.

The CX-30’s high beltline and small windows provide a better view out than the car’s exterior appearance suggests. Still, there’s no getting away from the feeling of being ensconced in this little crossover, especially if you’re like me and prefer to sit up high in a vehicle.

In the rear seats, passengers get good headroom. However, one rider complained that the cushions are hard and tight legroom limited stretch-out room on a long drive. Another complaint was directed at the rear outboard seatbelts, which lock up easily and have to be unbuckled and fully retracted before they’ll release.

Cargo space is unremarkable compared to most of the CX-30’s competitors, and Mazda’s specs say that the Mazda3 hatchback actually offers a bit more capacity with the rear seats folded.

With its new engine option, Mazda has turned the CX-30 Turbo into a class of one among subcompact SUVs. Its price positions it between the mainstream and upscale markets, while its newfound performance combines with the CX-30’s overall refinement to make it a legitimate competitor for vehicles from more prestigious brands.

For a small company like Mazda, trying to compete in two vehicle classes with a single model is a shrewd move, and the CX-30 was a good enough vehicle to begin with that it just might work.