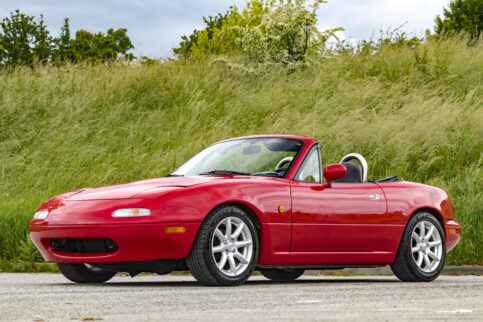 Looking to cruise through the warm weather in style while still maintaining a budget? In this post, we’ll look at some popular roadsters under $20,000 that are perfect for the sunny months.

First released in 1989, the Mazda Miata MX-5 is a light-weight convertible that practically screams “summer.” Its sleek design and exceptional performance attract drivers of all ages, and we couldn’t agree more. With such a glowing resume, it is no wonder that the Miata has been recognized for several impressive awards, including the Guinness World Record for best-selling two-seater sports car.

The BMW Z3 is special in so many ways. No will deny that the increased horsepower over its six-year lifespan was a good move on BMW’s part. Nor can you turn away from the sleek lines and expanded fenders. That it became a Hollywood star thanks to its appearance in three James Bond movies certainly helped.

But what really makes the BMW Z3 unique is its manufacturing history. In 1989, BMW decided to expand production outside of Germany. It opened a factory in Spartanburg, South Carolina, in 1994 which was designed to produce the BMW Z3 Roadster. Although BMW ceased production of the Z3 in 2002, the Spartanburg plant in still in production, manufacturing the BMW X3, X4, X5, and X6 models.

You will find this vehicle for under $20,000, often even for under $10,000, but do be aware of the condition of the vehicle. Some collectors are calling it a classic and will look after their Z3s with impeccable care (and the price will reflect that). Other sellers, sadly, won’t. Do you due diligence when purchasing, as you always should.

Designed for performance and less so for practicality, the Pontiac Solstice is party on the outside and all business on the inside. Its distinctive chrome, smooth body, bumpers that disappear into the car’s contours, twin-styled grills, and uniquely shaped headlights give the Solstice a sleek appearance.

An independent suspension, exceptionally responsive handling, and brakes that include an anti-lock system will give you confidence you are in safe hands with the Solstice. Combine these features with a 177-hp or 260-hp engine, rear-wheel drive, and five-speed manual transmission, and you’ve got a driving experience full of agility and speed.

If you don’t care for flashy gadgets and buttons, the crisp, minimalist interior of the Solstice will make you feel right at home. Moreover, the Solstice was only in production from 2006 to 2010, so you’ll find one for under $20,000.

The Saturn Sky and Pontiac Solstice are referred to as “fraternal twins” for their similar designs and performances specs, including 5-speed manual transmission and a 2.4-litre, four-cylinder engine. It sadly lived a brief life, however:

According to the Kelley Blue Book Canada, the typical dealer asking price for a two-door, rear-wheel drive, automatic transmission 2009 Saturn Sky with about 113,000 km is between $15,718 and $17,286 at time of writing.

The Audi TT still turns heads, but with a manufacturer’s suggested retail price of $61,800, a new one is far from under $20,000. What can you expect for an Audi TT for under $20,000? Based on the used Audi TTs we have listed on our site at the time of writing, we can set a few expectations for you:

As exciting as buying a roadster can be, shop smart: watch out for curbsiders, check for liens if you’re buying privately, and have a mechanic inspect the car before you buy. Do your due diligence and you’ll be well on your way to finding that affordable roadster for under $20,000 that can bring you pure driving bliss.