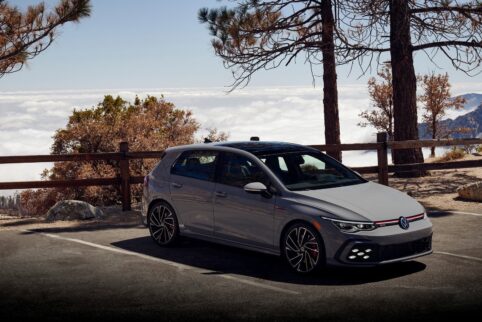 As automakers continue to add new small crossovers to their lineups, the market for compact hatchbacks is shrinking. But this group of practical and affordable small cars isn’t dead yet: Honda has an all-new Civic Hatchback coming out, and VW has redesigned its GTI sport compact.

Kia, Mazda, Subaru and Toyota still have compact hatchbacks to offer, too, all of which bring something unique to the category, whether it’s the Subaru Impreza’s attractive price and standard AWD or the Kia Forte5’s station wagon-like body.

Here’s a look at the highlights of the compact hatchback class for the 2021 and 2022 model years.

On October 1, Honda began selling the 11th-generation Civic hatchback, a five-door companion to the sedan that reached showrooms at the beginning of the summer.

Notably, the prices for all three Civic Hatchback trims include your choice of six-speed manual or continuously variable (CVT) automatic transmissions.

At its arrival in Canada this fall, the redesigned 2022 Volkswagen GTI will be the least-expensive version of the car you’ll be able to buy: Volkswagen has discontinued the standard Golf hatchback in favour of the company’s new Taos subcompact crossover.

Significantly, the 2022 VW Golf GTI comes in at $31,495 with a six-speed manual transmission ­­– $4,500 less than the entry-level 2021 model – and an upgraded 2.0L turbocharged engine boasting 241 hp and 273 lb-ft, increases of 13 hp and 15 lb-ft. A seven-speed dual-clutch automatic transmission adds $1,400 to the price. Base models come with LED headlights and an electronic limited-slip differential.

An Autobahn trim carried over from 2021 is priced at $34,995 with the six-speed and $36,395 with the dual-clutch automatic, and adds adaptive headlights, passive keyless entry, and a 10-inch infotainment screen. A new Performance package starts at $38,995 with the stickshift and $40,395 with the automatic and brings larger wheels with performance tires, adaptive suspension, and leather seating.

For many years, Subaru had held the Impreza’s price at under $20,000, an impressive feat considering it’s the only car in this segment with standard AWD. The 2022 breaks that streak, however, as the hatchback model’s MSRP rises to $21,995 for the Convenience trim level with its standard five-speed manual transmission and 2.0L four-cylinder engine (152 hp/145 lb-ft). An optional automatic CVT comes with the EyeSight driver assist system for $23,795.

The current Toyota Corolla hatchback made its debut in 2019, injecting some personality into the normally staid Corolla lineup, which also includes a more conservatively styled sedan.

For 2022, the Corolla hatchback’s base trims get an updated infotainment system, while XSE models gain an eight-speaker JBL sound system. Also new across the line is a feature that turns on the car’s taillights any time the car is in gear, a change that meets a new Transport Canada rule that took effect in September 2021.

The top XSE trim goes for $27,170 (or $29,150 with the CVT) and brings the JBL stereo, dual-zone A/C, adaptive headlights, and a power driver’s seat with leatherette upholstery.

Kia redesigned its Forte5 compact hatchback in 2020, and it carried over into 2021 with just one change: the addition of a manual transmission option for the GT trim, which becomes the only Forte5 available with a stickshift.

Kia’s pricing starts lower than that of the Civic, with EX trim coming in at $22,395. It’s powered by a 2.0L engine (147 hp/132 lb-ft) and a continuously variable automatic transmission that Kia calls an IVT (for intelligent) instead of the more common CVT.

The 2021 Mazda3 Sport’s big change is a new 2.5L turbocharged engine whose 250 hp and 320 lb-ft of torque makes it the more powerful car in its class. The 3 Sport is otherwise fundamentally unchanged from the car that introduced the fourth-generation model in 2019.

A top-end GT trim uses the same 2.5L engine and is standard with the automatic ($29,600) but you can option it with the stickshift for an extra $400. The automatic can also be had with all-wheel drive for $33,300; move up to the new turbo engine and the automatic transmission and AWD are included for $34,000.