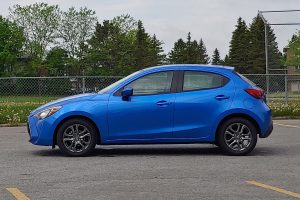 Shrinking demand for subcompact cars has seen many automakers cut their smallest models from their Canadian lineups, forcing fans of little vehicles to move up to pricier crossovers or SUVs.

Toyota was not willing to do that when considering the future of its entry-level Yaris. It was, however, keen to find an economical way to bring a new generation of the car into a segment less popular than it used to be. It found that solution by making a deal with one of its competitors, Mazda.

In 2012, the companies built a factory that would make a Mazda-designed subcompact for Toyota to sell as the Yaris in North America. Mazda had intended to sell its own version of that car as the second-generation Mazda2, but cancelled that plan in 2015 due to financial concerns.

The initial product of that deal was the 2016 Toyota Yaris sedan, and the companies have tightened their corporate ties with an all-new 2020 Yaris hatchback.

The Yaris is not the only car Toyota cooperates on with other manufacturers. Its Supra sports car is built around a BMW platform and powertrains, and it collaborated with Subaru on the Toyota 86 coupe.

Toyota applied its own styling cues to the front of the Yaris hatchback, but mostly left the rest of the car as Mazda made it. That’s especially true in the cabin, which is 100 per cent Mazda in design and execution. 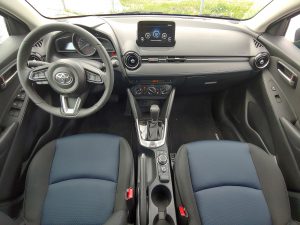 Despite the Yaris’s small footprint, the front seats are usefully roomy. Next to Toyota’s other small hatchback, the one-size-up Corolla, the Yaris gives up little headroom, actually has 115 mm (4.5 inches) more rear-seat legroom and matches the Corolla for front-seat legroom. In the context of Mazda’s lineup, the Yaris feels like it has at least as much rear-seat space as the Mazda3, whose cabin is snug for the compact class it competes in.

Next to the old Yaris, this new car feels more expensive inside – which is good, because the 2020 Yaris hatchback is more than $1,100 pricier than its predecessor.

On the road, the new Yaris impresses with a feeling of solidity unexpected in a subcompact car. I’ve heard more creaks and rattles in cars costing five times this one’s starting price – and for the record, the Yaris’s interior generated none. 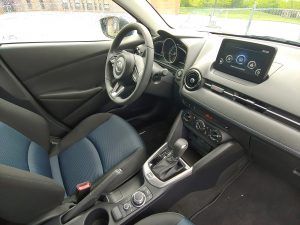 Also impressive – and entertaining – is the Yaris’s handling, which benefits from Mazda’s obsessive focus on suspension and chassis tuning. The old Yaris hatch was competent enough, but the new generation feels more planted and better-balanced when taking corners and curves at speed.

The 2020 Yaris hatch uses a 1.5L engine whose output matches that of the old Toyota-built motor. It performs best in city driving, where it has no trouble pulling the little Yaris up to speed. Once you reach about 80 km/h, however, acceleration is more deliberate, so think hard before pulling out to pass on two-lane highways.

That improvement is owed as much to the two extra gear ratios as to the new transmission’s tendency to upshift early and resist downshifting as much as possible. The result is a car that felt lazy when I wanted to pick up the pace. There are two ways around that problem: switch to the car’s sport mode or use the automatic’s well-done manual shift feature.

In a week of city driving, my test car matched its 7.3 L/100 km city rating with me taking every opportunity to enjoy the Yaris’s fun handling.

Toyota offers the 2020 Yaris hatchback in base and XLE trims. The base model starts at $16,790 with the manual transmission, and $17,890 with the automatic. 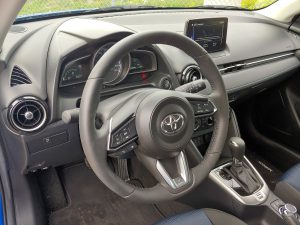 The XLE trim I tested includes the automatic and is priced at $19,450. It also adds a heated and leather-trimmed steering wheel, heated front seats, alloy wheels, and fog lights.

What’s missing is Toyota’s Safety Sense suite of driver assists. The old Yaris hatch came standard with lane departure alert, automatic high beams, and forward collision avoidance with automatic braking. The new Yaris hatch includes only the last item in that list, which is a questionable step backward. In Europe, the Mazda2 comes standard with lane keep assist and can be optioned with blind spot monitoring.

As if to prove the waning popularity of subcompacts, Toyota only stocks the Yaris hatchback at its dealers in Quebec, where appetite for small cars is among the strongest in Canada. It’s a special order elsewhere in country, for which Toyota demands an extra delivery charge.

There was little wrong with the old Toyota Yaris, if you ignored the ageing design that lagged its competitors in many respects.

In working with Mazda on this new Yaris, Toyota has corrected those flaws and then some. It’s roomier and more entertaining than expected, while delivering the kind of fuel economy Toyota is known for.

Assuming small-car sales keep falling in North America, this could be the last generation of Yaris to come here. If that ends up being the case, at least this well-loved subcompact would go out on a high note.