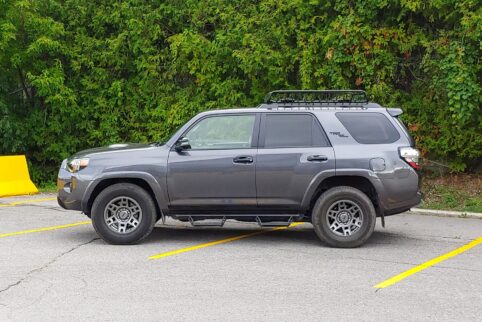 Toyota may not be a household name in off-road vehicles, but in fact, the company’s 4Runner is one of the auto industry’s longest-running SUVs built to tackle unpaved surfaces.

It’s also one of a handful of SUV models that cater primarily to fans of off-roading. The one you might know best is the Jeep Wrangler, which has been in the news a lot lately following a complete redesign in 2018 and the Wrangler-based Gladiator pickup that was added in 2020. Most recently, Jeep announced a plug-in hybrid (PHEV) version of the Wrangler coming in early 2021.

That’s a lot of Jeep talk in a Toyota review, but it’s relevant for two reasons. One is that if you had asked me a few years ago, I would never have predicted that Jeep would beat Toyota to market with a hybrid off-roader. The second is that the 4Runner is an old vehicle. Introduced in 2010, the current fifth-generation model is a dinosaur: Most vehicles go just four to six years between complete redesigns.

For this review, I drove a 4Runner in a new-for-2020 Venture trim level. Toyota has also added a full suite of driver assist features that are standard across the range. The Safety Sense P package includes automatic high beams, radar cruise control, forward collision avoidance, and lane departure warning.

What’s not new is the 4Runner’s driveline. A 4.0L V6 engine puts 270 hp and 278 lb-ft of torque through a five-speed automatic transmission to standard four-wheel drive. There’s nothing inherently wrong with that setup. But while the engine is strong enough to provide authoritative acceleration, the transmission’s five ratios are too widely spaced to make the best use of it.

The 4Runner is also a relatively thirsty truck, even for a bushwhacking off-roader. Toyota’s fuel economy estimates are 14.8/12.5 L/100 km (city/highway). My tester averaged 13.4 L/100 km in a mix of city and highway driving.

Although a plug-in Wrangler is coming, Jeep already sells mild hybrid eTorque versions of the Wrangler. These can’t run on electricity alone and aren’t designed to save much gas, but they use a small battery and electric motor to add low-end power. Jeep also offers a diesel Wrangler Unlimited that boasts the model’s best fuel economy.

For another fuel economy comparison, the brand-new 2021 Chevrolet Tahoe uses a 355-hp V8 and a 10-speed transmission to achieve slightly better fuel economy estimates than those of the 4Runner.

The brakes were my least favourite aspect of the 4Runner. Initially, the pedal is soft and feels like it’s not doing much, and then the brakes bite abruptly, which makes it hard to drive smoothly at city speeds.

I can’t compare the 4Runner’s off-road prowess to that of the Wrangler, but I do prefer the Toyota’s performance on paved roads. There’s less wind noise at highway speeds, and the 4Runner is easier to keep centered in its lane than the Jeep, which is more prone to wander and gets tiring on long drives.

Inside, the 4Runner has seating for five in wide, supportive front seats and a rear bench with good space for two and passable comfort for three. There’s also a seven-seat option in certain trims.

Dual-zone automatic climate control is a new standard feature for 2020, along with passive keyless entry and Apple and Android smartphone integration. There’s also an 8.0-inch touchscreen for the stereo.

The large temperature control dials are a good fit with the 4Runner’s rugged image, but the stereo’s small volume and tuning knobs are not. To me, one of the most noticeable missing features is tap-to-pass turn signals that blink three times at a single tap of the signal lever. It’s a small thing, but you’ll miss it if you’ve lived with it for any length of time.

Despite the 4Runner’s standard set of driver safety assists, Toyota does not offer blind spot monitoring or rear cross traffic alert in this truck.

Because it’s aimed at fans of off-roading, the 4Runner’s chassis stands high off the ground, so it comes standard with running boards to help you get in and out. However, Venture trim swaps those for so-called Predator side steps that are hard to get good footing on.

My Venture-trimmed test vehicle also had a removeable roof basket mounted to its roof rails. It bumps the 4Runner’s height to more than six feet, so pay attention to the height restrictions in covered or underground parking lots.

The 2020 Toyota 4Runner Venture ($55,390) is based on a TRD Off-Road trim carried over from 2019. It bolsters this truck’s inherent off-road abilities with a locking rear differential, crawl control, multi-terrain select, and navigation. Also included is Toyota’s Kinetic Dynamic Suspension System, which offers the seemingly disparate benefits of flatter handling on paved roads and better suspension articulation when traversing rough stuff.

The 4Runner comes standard with a four-wheel drive system you engage manually with a mechanical lever next to the transmission shifter. Limited trim comes instead with an automatic 4WD system you can leave engaged all the time, but that configuration gives up some off-road prowess in favour of more upscale interior features.

For comparison, a Jeep Wrangler Unlimited in its super-capable Rubicon trim is more than $3,000 cheaper than the 4Runner Venture.

For all that the 4Runner remains a capable off-roader, it has been shoved out of the spotlight by the newer Wrangler and its wider range of powertrain options.

But if you’re looking for an SUV that can handle paved roads as well as dirt trails, the 4Runner is a better all-rounder that remains an attractive choice despite its advanced age.