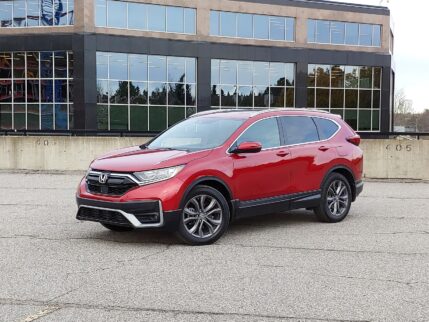 Honda redesigned its CR-V compact crossover in 2017, introducing the fifth generation of a vehicle that helped create the segment in the late 1990s.

It was the first CR-V with a turbocharged engine, a move that sounds like it was geared toward improving performance, but was really more about reducing fuel consumption.

Thankfully, Honda didn’t mess with the practicality that has helped the CR-V become one of Canada’s favourite family vehicles. While it’s still marketed as a compact model with a starting price of less than $30,000, the CR-V has grown through the years so that it’s roomy enough to be considered alongside some mid-size models.

For its fourth year on the market, Honda refreshed the CR-V’s styling. It also made the Honda Sensing suite of driver assists standard across the line—it was not previously included in the entry-level two-wheel drive model.

Honda added two new trim levels for 2020. One is the Black Edition appearance package, and the other is the Sport trim that I tested. Sport replaces last year’s EX model and includes 19-inch wheels, LED fog lights, sunroof, power tailgate and driver’s seat, and a heated steering wheel with leather trim.

All CR-V trims use a 1.5L turbocharged four-cylinder engine. That sounds small for the CR-V’s size, but its power provides adequate, if not breathtaking, performance, and the continuously variable transmission (CVT) does its job well enough that you’ll rarely notice it. What you will notice, however, is the amount of engine noise generated in quick acceleration, which stands out against the CR-V’s otherwise refined demeanour.

The CR-V’s primary reputation is for efficient and practical A-to-B transportation. It’s also reasonably entertaining to drive, with sharp handling and a ride that’s firm without being uncomfortable on rough pavement.

All CR-V trims but the entry-level LX come with a sunroof, which eats some front-seat headroom. In my Sport tester, with its regular-sized sunroof, headroom is more generous in the rear. Touring and Black Edition models get a larger panoramic roof, but even that manages to preserve rear-seat headroom.

There’s comfortable seating all around, but tall rear-seat riders may wish for more thigh support from the low bottom cushions.

Among the CR-V’s most practical touches is its spacious cargo area. The floor is low, making it easy to load heavy items and providing space for tall, bulky items, and the rear seats fold down flat for extra storage.

Up front, Honda has built in useful spaces to stash items like smartphones and wallets, including dual covered cubbies in the centre console.

One thing I’m glad for is that Honda put a conventional gearshift lever in the CR-V instead of the push-button transmission controls it uses in other models.

Sport is next, adding the niceties I listed near the top of this article.

Touring gets the larger sunroof, LED headlights, rain-sensing wipers, a hands-free tailgate, navigation, wireless smartphone charging, and a subwoofer for the stereo, while Black Edition builds on Touring with a few visual touches.

Price-wise, the new $35,205 Sport package is positioned dead in the middle of the CR-V with a list of equipment to reflect that. Generally, I think it’s a good deal for what it includes, but I wish the sunroof was an option because of the headroom it steals from the front seats.

Since the CR-V’s introduction, Honda has never lost sight of this compact crossover’s purpose as a practical family vehicle. Most importantly, it’s easy to live with and efficient to drive. And while a more refined-sounding engine would be nice, the CR-V offers whoever is behind the wheel just enough entertainment to keep things interesting.