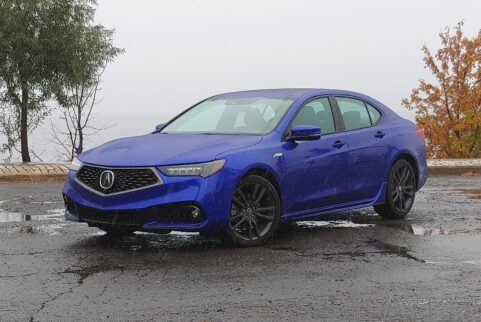 Introduced in 2015, the Acura TLX is the brand’s mid-sized luxury sedan model. It replaced the TL, a car that spanned four generations between the mid-1990s and 2014.

While this first-generation TLX looks plainer than its predecessor, its drivetrain promised better performance. A then-new four-cylinder option came with an eight-speed dual-clutch transmission, and a V6 carried over from the TL was matched with a nine-speed automatic, both of which replaced the previous car’s six-speed.

Despite those changes – and a sophisticated and effective AWD system carried forward from the TL – the TLX has never captured much attention from sport sedan buyers.

Acura hopes to fix that with a new, second-generation TLX out for the 2021 model year that I think will do better in the attention-getting department.

For the moment, however, you can still buy a 2020 TLX. It remains one of the luxury segment’s best sedan values, even if it is behind the times in many ways.

From behind the wheel, the TLX’s highlight is its Super Handling All-Wheel Drive (SH-AWD) system. It’s notable for the way it “overdrives” the outside rear wheel in a turn to improve handling and steering accuracy when accelerating through a corner. The TLX’s sharp handling comes with a firm ride that can be uncomfortable on rough pavement.

Acura’s slick AWD system makes it that much more fun to enjoy the TLX A-Spec’s 3.5L V6. It’s a smooth performer that sounds good when pushed into the high end of its rev range. However, a naturally aspirated V6 is an anomaly in the luxury sedan class, where turbocharging has become de rigueur. As a result, the TLX lacks the low-end torque available in most of its competitors and, as a result, feels less powerful than it is.

The nine-speed automatic transmission that connects the TLX’s engine to its drive wheels is the car’s weak point, mechanically. After you start the car, it shifts into drive with a lurch, and delivers inconsistent shift quality in day-to-day driving. It works best when you shift it manually, which made me wish for a way to do that other than the steering-wheel-mounted shift paddles.

One of the first things you learn about the TLX is that you have to mind how you get into it. Up front, it’s easy to hit your knee on the dash as you step in. And if you’re riding in the back, the trailing corner of the rear door swings quite close to your body if you’re not careful.

Once you’re in, you’ll find supportive front seats whose aggressive bolstering is most comfortable for slim people. All SH-AWD TLX models get an eight-way power front passenger seat to help optimize comfort, and my tester also had power thigh extensions on the front seats. Elite trim also adds front-seat ventilation, and heated rear seats and steering wheel are included from SH-AWD Tech trim all the way to the top Elite A-Spec model I drove.

The TLX’s rear seat is not especially roomy for a car with its mid-size dimensions.

You can also get the TLX’s A-Spec and Tech A-Spec trims with a 2.4L four-cylinder engine and front-wheel drive, which contribute to more favourable fuel economy estimates of 10.2/7.4 L/100 km.

2020 Acura TLX prices start at $37,490 for the four-cylinder A-Spec model, while the least-expensive V6-powered SH-AWD version is $42,490. All trims include forward collision warning, adaptive cruise control, lane keeping assist, dual-zone climate control, and LED headlights, and any TLX with the Tech designation adds blind-spot and rear cross-traffic monitors, navigation, and a 10-speaker stereo.

Those are attractive prices for the features in my test car; I would argue the redesigned 2021 TLX does even better at $52,190 for its Platinum Elite trim, which gains an adaptive damper suspension and a head-up driver display, and is powered by a torquier turbo engine and a new 10-speed transmission.

If all you’re after is a generous list of comfort, convenience and luxury features, the outgoing 2020 Acura TLX is a good way to get those in a car that still knows its way around a twisty back road. Just make sure you can live with the car’s design quirks and so-so transmission performance.