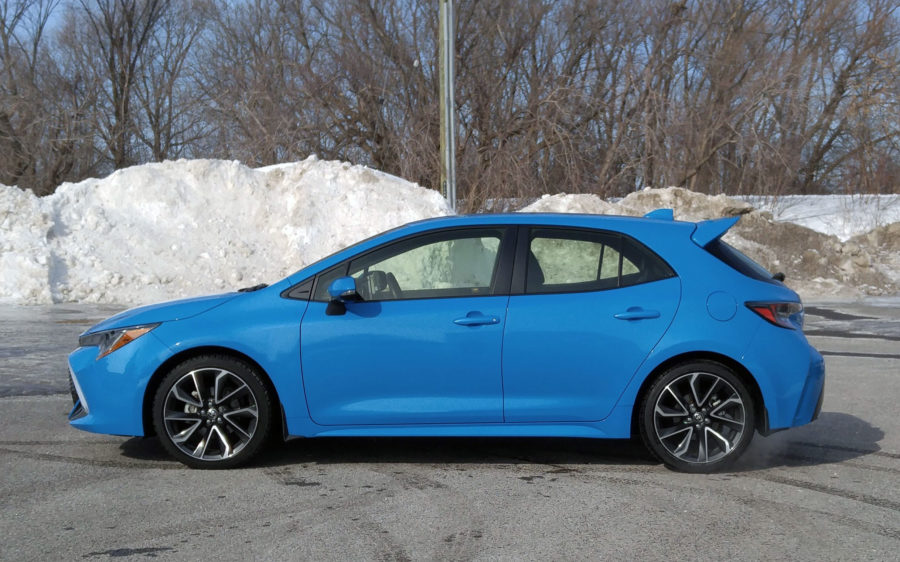 The Toyota Corolla has a well-earned reputation as an efficient and durable compact car, traits that have helped it become one of the best-known names in the auto industry.

Toyota is now on a campaign to attract attention for reasons beyond those admirable qualities. It started with the Prius hybrid and Camry sedan, which were among the first Toyota models to ride on a new platform designed to make the brand’s cars more fun to drive.

Now it’s the Corolla’s turn. Toyota introduced the 12th generation of its compact stalwart for 2019 as a redesigned hatchback model built on that same new platform. It makes an excellent first impression based solely on its good looks and follows that up by being the most compelling Corolla in many years.

All Corolla hatchback models use a 2.0L four-cylinder that’s part of Toyota’s new family of Dynamic Force engines. That name evokes big performance, but its 168 hp and 151 lb-ft of torque are pretty average for the compact class.

Its actual performance is less interesting than the Corolla hatchback’s styling. Acceleration is adequate when you’re in a hurry and comes with a lot of engine noise.

The new Corolla’s transmissions offer more to talk about. The six-speed manual has a rev-matching feature that makes downshifting smoother. Meanwhile, the continuously variable automatic (CVT) is the industry’s first such transmission with a launch gear, which Toyota says improves the car’s responsiveness when driving away from a stop.

Toyota provided us with a Corolla hatchback in top-end XSE trim with the optional automatic. We say the jury’s out on the effectiveness of that launch gear. What we noticed more than anything was the transition to the belt drive that’s common to all CVTs. It generates the kind of gentle bump you feel like a traditional automatic (with fixed ratios) shifts to the next-highest gear. If you’re a gearhead like us, you’ll have no problem with this. It just seems like an odd thing to build into a type of transmission conceived partly to eliminate that sensation.

All that said, the Corolla’s transmission works just fine. It’s smooth to upshift in gentle acceleration and responds promptly with a downshift for highway passing.

The ride is firm but better composed than in any Corolla we’ve driven before. If you’re a fan of fun driving, you’ll appreciate the more direct feel of the steering. Put the car through a fast corner and it seems happy to play along. If cars could talk, Corollas of the past would have complained loudly about such treatment.

On the negative side, the Corolla hatchback’s new, more engaging drive comes with a significant amount of road noise at highway speeds.

Back seat: If you’re in the market for a compact car and plan to use the back seat regularly, our best advice is to sit back there yourself before you buy a Corolla hatchback. The hatch’s wheelbase — the measurement between the front and rear axles — is shorter than that of the sedan, which mostly translates into less rear-seat space. And pay attention when getting in and out: it’s easy to hit your head on the top of the door opening.

Dashboard: The Corolla’s dashboard looks good and works well. Our XSE test car had a configurable gauge cluster that shows either a digital speedometer or a graphic representation of an analog one.

Toyota prices the Corolla hatchback starting at $20,890. That includes the following features:

The 2019 Toyota Corolla hatchback is a textbook lesson on how to make a good thing better. Its new styling and improved underpinnings expand the car’s appeal beyond Toyota’s existing reliability-obsessed fan base. On the downside, hatchback buyers who like this body style for its added practicality may be turned off by the small rear seat. On balance, call it a win for drivers who have been waiting for Toyota to make its ultra-reliable Corolla more fun to drive.