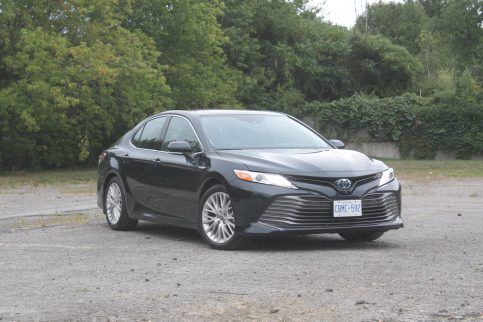 As I write this, rumours are circulating that Toyota will reveal an electric concept car, powered by a solid-state battery, at next year’s Tokyo Olympics. 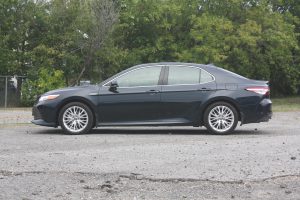 The main advantage of solid-state batteries is that they can store more electricity in a smaller package. Toyota says it expects to be among the first car companies to bring solid-state power to the marketplace a few years from now. That’s a long time to wait, considering Toyota still has no fully electric models, while its rivals at Hyundai and Kia already have four EVs on sale, along with a number of plug-in hybrid (PHEV) models.

In the meantime, Toyota still believes there’s a big market for today’s lithium-ion batteries in conventional hybrid vehicles. Toyota launched the third-generation mid-size Camry Hybrid in 2018, promising a car that was more interesting to drive and fuel-efficient than its predecessor.

Based on the 2019 Camry Hybrid I tested recently, they made good on at least one of those promises. 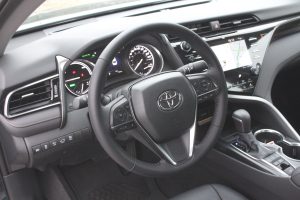 If you’re considering buying a hybrid, I imagine you’re after good fuel economy, so let’s start there. Toyota estimates the Camry Hybrid’s fuel consumption at 5.3/5.0 L/100 km (city/highway). My XLE trim test car averaged an excellent 4.8 L/100 km over 850 km of highway driving at speeds between 100 and 120 km/h. Remember, this is not a plug-in car, so the gas engine was running for the majority of that day-long drive.

If you want even better fuel economy, Toyota’s estimates for the less-expensive Camry Hybrid LE are 4.9/4.8 L/100 km (city/highway).

It’s easy to write off hybrids as uninspiring performers, but the Toyota Camry Hybrid boasts good power, thanks to its electric motor’s torque. With a good charge in the battery, acceleration is quiet, with the electric motor pulling a lot of the car’s weight.

Like all hybrids, the Camry uses regenerative braking to help recharge the battery. Despite Toyota’s decades of experience with hybrids, it still hasn’t found a way to make the brakes feel natural at low speeds.

The Camry Hybrid lives up to this car’s reputation as a relaxed driver. The ride is soft and comfortable, but so-so braking and steering feel won’t inspire you to push the car through fast corners. I was also unpleasantly surprised by how easily sharp bumps upset the Camry’s poise at highway speeds. 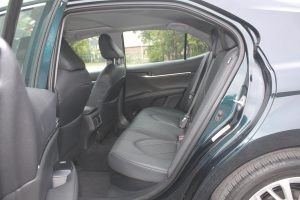 The Camry’s interior is vast, with plenty of room for four adults. We’ve done the long drive between Ottawa, Ontario and Maryland, USA in many different cars, and the Camry Hybrid was one of our favourites. Supportive front seats were a blessing during two-hour stints on the road, during which we never felt crowded in the wide cabin.

A large trunk kept our stuff out of sight during rest stops. Notably, the Camry Hybrid has folding rear seats with a full-size cargo pass-through for long items. In previous versions, this has been compromised by the electric motor’s battery.

My Toyota Camry Hybrid XLE test car is the top model with the gas-electric powertrain. Its price was nearly $41,000, but that didn’t include a heated steering wheel or ventilated front seats, the former being the most notable omission.

Toyota faces new competition from a redesigned 2020 Hyundai Sonata, a family sedan renowned for its strong value. And the Honda Accord, arguably the Camry’s key rival, offers both of those niceties.

A lane-keeping assist feature was similarly hit-and-miss, with its abrupt interventions proving more of a distraction than a benefit.

This latest Camry Hybrid doesn’t even pretend to be sporty or entertaining. Instead, Toyota has made this car better at what it was already good at. Until those fancy new batteries come along, that’ll have to be good enough.