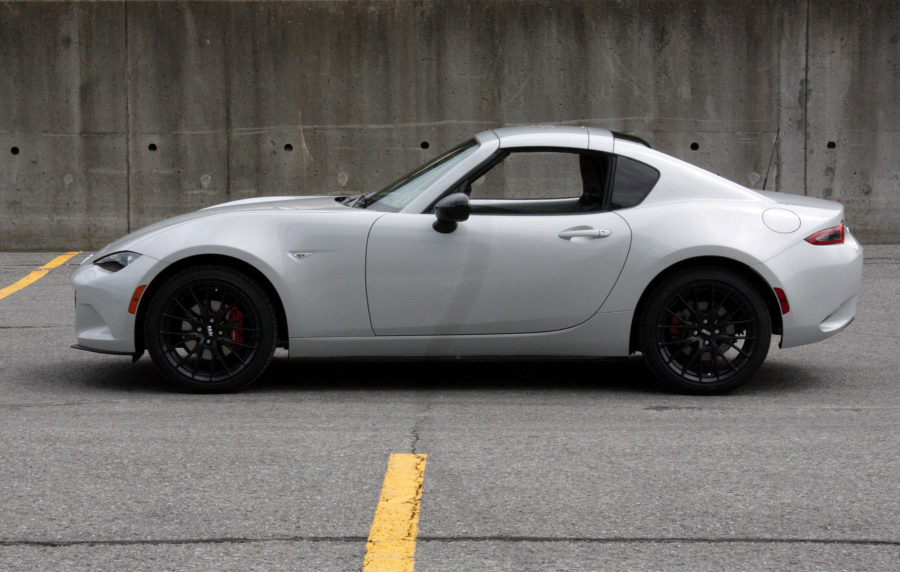 The Mazda MX-5 Roadster was never meant to satisfy drivers with a big appetite for power. In the car’s earlier days, when it was better known as the Miata, the most potent version was a turbocharged Mazdaspeed version. Mazda offered this speedier car for just two years in the mid-2000s with a 178-hp engine.

As of last year, the fourth-generation 2016 MX-5 still boasted just 155 hp from a 2.0L engine similar to that in the Mazda3 economy car. For 2019, Mazda’s engineers found a way to extract another 26 hp from the same engine — for a total of 181 — giving the new MX-5 the highest factory horsepower rating in the model’s history.

One of our favourite car-related maxims is that it’s more fun to drive a slow car fast than a fast car slowly. The MX-5 is a great demonstration of that concept. It may need more time to get up to speed than more powerful sports cars, but sharp handling means less need to slow down for corners.

The extra power isn’t immediately obvious. What we noticed first is the engine’s higher redline, which gave us more time to enjoy its fun soundtrack before shifting to the next gear. It almost made us wish for red lights so we could do it all over again — and again. The soundtrack reminds us of the super-smooth rotary engine in the defunct RX-8 sports car.

Mazda fitted our test car with the six-speed manual transmission. A six-speed automatic is optional and works just fine, but the MX-5’s stickshift is one of the best in the business. It’s easy to drive smoothly and its closely spaced ratios mean you get to do a lot of shifting in city driving.

The MX-5 handles great and has a comfortable ride. So many sports cars sacrifice ride comfort to achieve nimble handling. Mazda, however, found a way to tune the MX-5’s suspension for a compliant ride without giving up handling prowess. It’s one of the things that makes the car easy to live with as a daily driver.

It would have been hard for Mazda to put any of the MX-5’s controls out of the driver’s reach in such a small cabin. Among the car’s less convenient touches is the glove box’s placement between the seats, a necessity for carving out maximum passenger legroom.

We like the MX-5’s all-analog gauge cluster. It’s centred around a big tachometer to make it easy to track engine speed in enthusiastic driving.

A knob on the console controls the infotainment system, which is displayed in a screen atop the centre stack. That display is also touch-sensitive to give users a choice in how to interact with the system. In our household, the stereo’s volume control won praise for its position next to the infotainment dial. That makes it easier for the passenger to make adjustments without having to reach for the centre stack.

The small cabin is not for everyone. Another MX-5 downside is its small cabin, even compared to other two-seaters. If you’re well under six feet tall, you should be able to find a driving position you like. But as driver or passenger you might be out of luck if you have long legs. In the driver’s seat, you’ll either have to splay your knees to either side of the steering wheel. Taller passengers will find their knees uncomfortably close to the dashboard. There’s not a lot of headroom, either.

The trunk is small, but two people can go on a weekend road trip if they pack lightly.

Highway driving brings out road and engine noise. Not long after this fourth-generation MX-5 arrived as a 2016 model, we racked up close to 1,000 km in highway driving behind the wheel of one. At the time, we found the cabin noisy, but livable; Mazda added more sound insulation last year. In any event, the MX-5 still lets a lot of tire noise into the cabin at highway speeds.

Our test car was a folding-hardtop model called MX-5 RF, for retractable fastback. It helps reduce wind noise when it’s in place and adds some security when the car is parked. It’s an attractive $7,000 addition to the car’s base price that makes the car look more exotic than it is. For better or worse, it also makes the MX-5 a more complex machine: the folding hard top is electric, but the standard manual soft top is so easy to use that you can raise and lower it with one hand from either of the car’s seats.

At $32,900, the soft-top Mazda MX-5 is less expensive than its closest competitor, the Fiat 124 Spyder. Amusingly dubbed the “Fiata” by car enthusiasts, the 124 shares the MX-5’s chassis but uses Fiat’s own turbocharged engine and is priced at just under $35,000.

The MX-5 is pricier than two other small sports cars, the mechanically similar Toyota 86 ($29,990) and the Subaru BRZ ($27,995). Those two differ with their fixed roof, rear seats and a notably firmer ride, but the experience is similarly driver-focused. Both are more powerful than the Mazda MX-5, boasting 205 hp from a Subaru-engineered drivetrain. However, we think the MX-5 has always felt quicker, even before this year’s infusion of power.

The Mazda MX-5 RF starts at $39,900, but our GT-trimmed test car carried an MSRP of $42,900. To the base RF, the GT adds gunmetal wheels, satellite radio, automatic climate control, an auto-dimming rearview mirror and leather seating.

At that price, the MX-5 nearly reaches into luxury car territory. The Audi A3 Cabriolet starts at $44,400, and the BMW 2 Series convertible has a $48,000 base price. Both are more powerful than the MX-5, come standard with AWD and have rear seats.

We like the Mazda MX-5 RF’s look and its added refinement. However, the MX-5’s real appeal is the way it drives and the soft top model’s straightforward convertible experience. We’re happy to do a little more work to enjoy open-air driving at the soft-top MX-5’s more affordable price.