Car Reviews and Tips » What’s the Difference Between a Full, Mild, and Plug-in Hybrid 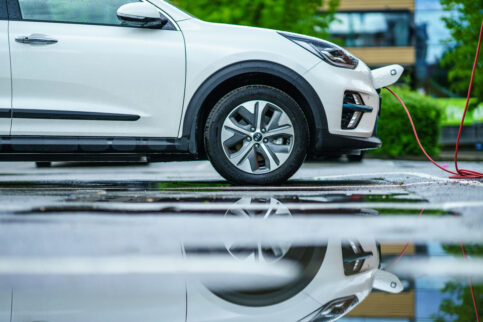 For those interested in electric vehicles (EVs) but worried about range anxiety, a hybrid can be an ideal alternative. But how do you pick the right one? Let’s go over the differences between full, mild, and plug-in hybrids to help you find your perfect match.

Full hybrid electric vehicles (FHEVs) typically come in one of two powertrain types: parallel and series. A parallel hybrid vehicle can be powered solely by its internal combustion engine (ICE), by the electrical motor, or by both at the same time. A series hybrid uses the ICE to power the electric motor, which moves the vehicle’s wheels. The gasoline engine can’t power the vehicle on its own. Instead, it acts as a generator for the electric motor.

A third, less common, option is the series-parallel hybrid. These vehicles rely on an on-board computer system to switch between the two powertrains, depending on which is most efficient at a given moment.

All FHEVs recharge their battery by recovering energy when the vehicle brakes (regenerative braking) and by pulling power from their ICE.

These are some examples of full hybrid electric vehicles:

Mild hybrid electric vehicles (MHEVs) are the least common type of hybrid. They mainly rely on the ICE, using their battery for an additional boost when needed (usually to propel the car after a full stop). Like FHEVs, MHEVs recharge with regenerative braking and by drawing power from the ICE.

Automakers call their mild hybrid technology by different names, like

MHEVs currently on the market include

Plug-in hybrid electric vehicles (PHEVs) have a much larger battery than FHEVs and MHEVs, which means they can travel the farthest on electricity. When in motion, they mainly rely on this battery, but will switch over to the ICE once their electric power starts to run low. Besides regenerative braking, PHEVs have to be connected to an external charger to fuel up their battery.

PHEVs are sometimes preferred over full EVs because they’re commonly paired with Level 1 charging, which is one of the cheapest and easiest ways to charge because it’s typically done from home with a standard 120V outlet. Regular EVs can also use Level 1 charging, but it takes considerably longer due to the size of the battery. In Canada, certain PHEVs are also eligible for federal incentives.

Here are some popular PHEVs:

If you don’t have access to a charging port near your home or workplace, it may be difficult to get around with a PHEV. The Canadian government has plans to improve charging infrastructure, however, so it should become easier to charge up (for free) in public in the near future.

How Do I Choose?

Choosing which type of hybrid to go for is largely based on your driving habits and personal preferences. For example, if you often drive long distances, you may want to avoid a PHEV so you don’t have to stop to charge along the way. If environmental impact is very important to you, however, the extra time needed to plan your route with a PHEV may be worth it.

To help guide your decision, here’s a summary of the key differences between the hybrid types:

Since they all have a gas tank, switching to a hybrid from a regular ICE vehicle won’t be as much of a transition as going fully electric. For those who really don’t like change, though, FHEVs are the most similar to ICE vehicles. Renting a hybrid  can help you decide if it’s right for you before you make a commitment. For more information about hybrids, check out our blog.