Car Reviews and Tips » What is the Fine for Driving Past a School Bus? 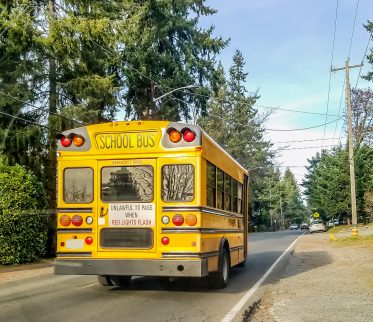 In 2012, Lydia Herrle, then 13, was struck by a recycling truck as she stepped out of a school bus directly in front of her home. She hadn’t run around the front of the bus: she was struck stepping off it. The driver of the truck had dropped his cigarette. A moment or two later, he clipped the bus on its right side and sent Herrle flying 25 metres. This accident shows that driving past a school bus that has its upper red lights flashing can cause you more than just a fine.

It can be tempting to want to whiz by a school bus so you don’t have to stop behind it every time it stops. It’s also easy to believe you’ll never hit a student doing so. But as Lydia Herrle’s situation shows, just taking your eyes off the wheel for three seconds can have dire consequences. When you see a school bus, drive carefully.

In Ontario, the first offence for passing a school bus while its upper red lights are flashing is a fine of $400-$2,000 and six demerit points. Subsequent offences can cost you between $1,000 and $4,000, six demerit points, and up to six months in jail. In addition, vehicle owners can be charged if their vehicle illegally passes a school bus, even if they were not behind the wheel.

If you’re driving on a road without a median, you must stop for a school bus when it has its upper red lights flashing, no matter if you’re traveling in the same or opposite direction as the bus. Always stop at a safe distance from the bus. This gives the students space to safely cross and the bus driver the ability to keep their eye on both directions of traffic.

A bus driver is an adult driving a vehicle with up to 75 children in it. If you have kids and remember those road trips with them, imagine 75 of your children and just you. It’s not an easy job, nor is it a highly desirable one.

Schools may have a bus patrol program in place, where older students volunteer to help keep younger students in line. Based on my experience, this doesn’t always work. So always think of that sole adult with dozens of children in a vehicle.

Take a Breath and Slow Down

We’re all really busy, and the temptation to hit the gas so you can speed up is very strong. Or perhaps your phone goes off and you want to sneak a peek to see who called.

Or you drop your cigarette.

Lydia Herrle’s family kept a blog about her recovery. In the year of the accident, they wrote 209 entries. Between 2013 and 2017, only a few each year. However, by 2017 she still had not recovered. In fact, Herrle’s family wrote that she was at least now attending school three days a week for three hours a day. This is five years after she was hit by a recycling truck.

When you see a yellow bus, either take a detour so you don’t have to follow it, or drive very carefully. Your extra attention will help avoid an accident so up to 75 students can get home safely.