Car Reviews and Tips » What Is Ford BlueCruise? 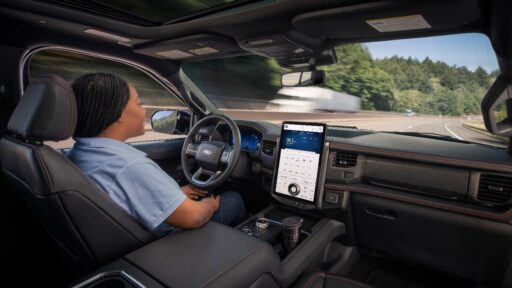 Have you ever wished you could switch your car into autopilot to just sit back and enjoy the ride? While you can’t purchase a fully autonomous car just yet, you can check out advanced driver-assistance systems (ADAS). These systems take on certain responsibilities of operating a vehicle, limiting how much the driver needs to be involved.

In this post, we’ll go over what Ford Motor Company has to offer with their ADAS, BlueCruise.

BlueCruise is an intelligent adaptive cruise control and lane-centring system that offers hands-free driving on select highways in North America. In 2020, Ford launched their first ADAS, known as the Active Drive System. In 2021, it was rebranded as BlueCruise to avoid confusion with Jeep’s Active Driving Assist system.

Of the five levels of driving automation (Level 0 being no automation and Level 5 being fully autonomous), BlueCruise sits at Level 2. This means that even when the system is engaged, the driver has to remain alert to take full control of the vehicle at any time.

Before releasing it to the market, BlueCruise was put through more than 800,000 km of development testing, including 170,000 km of highway driving across 37 U.S. states and five Canadian provinces in a wide range of weather and road conditions.

How Does It Work?

BlueCruise uses a combination of cameras and sensors to determine how and when to adjust the speed and position of the vehicle based on its surroundings. With this technology, BlueCruise offers a variety of assistive features:

The last feature is highly sought after.

Additional features expected to be added to BlueCruise 1.2, launching in 2023, include lane change assist and predictive speed assist.

Concerned about drivers falling asleep at the wheel? An infrared camera sits on top of the steering column to monitor the driver’s eyes and head positioning to make sure they’re looking at the road. If the system detects the driver has become distracted, it’ll issue a warning and then shut itself off to reengage the driver.

BlueCruise’s hands-free highway driving allows a driver to remove their hands from the wheel when travelling on a highway. It works on more than 300,000 km of North American roads, known as Blue Zones, which are pre-mapped areas where the system is available via over-the-air updates. This network is constantly expanding to cover more ground across the continent.

Most of the current coverage is in the United States, but those driving through certain areas of southern Canada, including some national parks, can also take advantage of hands-free driving.

You can find a map of all the Hands-Free Blue Zones here. Ford plans to release an interactive version of this map in the near future.

Drivers wanting to access BlueCruise features must pick a vehicle that already has the Ford Co-Pilot360™ Active 2.0 Prep Kit installed. BlueCruise software costs approximately $750 for the first three years of service. After this three-year period, drivers can access BlueCruise by purchasing a subscription.

As of November 2022, BlueCruise is available on select trims of the following vehicles:

More vehicles are expected to be compatible with BlueCruise in the future.

BlueCruise vs. Other ADAS

General Motors’s Super Cruise system, for example, operates in a similar fashion, using pre-mapped highways. However, it also uses an HD GPS receiver to locate the vehicle within about six feet of its lane, and with the push of a button, the driver can change lanes.

By comparison, BlueCruise relies on just cameras and sensors to keep the vehicle centred on pre-mapped stretches of highways.

With further research and improvements, BlueCruise could become the new favourite among fans of semi-automated driving.