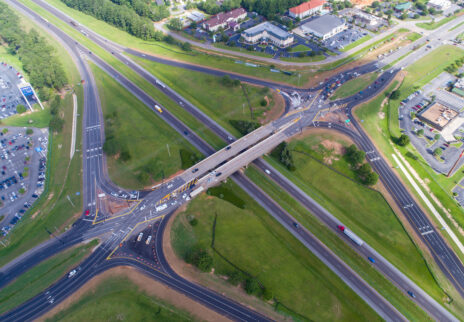 If you’ve been driving in Canada for a while, you’ve probably got a good sense of the typical layout of the roads and traffic designs in the country. Some old traffic designs are returning to today’s roads, such as the diverging diamond interchange (DDI).

What Is a DDI?

By replicating a diamond shape, opposing directions of travel cross each other on either side of the interchange while allowing highway traffic to continue on the overpass or underpass. In North America, this means that traffic will temporarily switch over to the left side of the road.

How Does It Work?

Most DDIs have two entrance and exit ramps to/from the highway. Drivers exiting or entering the highway can do so without stopping. This can vastly improve the flow of traffic and reduce the likelihood of crashes.

DDIs often have pedestrian walkways and crosswalks. Drivers must wait for all pedestrians and cyclists to cross before moving through the interchange when they have the right-of-way. Road markings, traffic signals, overhead signs, and raised concrete islands help guide drivers through DDIs.

Like a roundabout, DDIs can be overwhelming for those new to them. However, as long as drivers respect the rules of the road and follow the correct signage, they should be able to move safely through the interchange.

Not only do DDIs diverge traffic, they stir up some divisions of opinion among drivers. Let’s look at some of the main pros and cons associated with DDIs.

The first DDI was built in the 1970s in France. The design never fully took-off, however, and DDIs are still rare across the world. Most countries with any DDIs have just one or two. The United States has the most, with over 99 in operation and several more in construction.

This year, Ontario opened up its first DDI in the Niagara region. It can be found where the Queen Elizabeth Highway (QEW) meets Glendale Avenue. This is the third DDI in Canada. The other two are in Calgary, Alberta, and Regina, Saskatchewan.

The Ministry of Transportation proposed the Niagara DDI to reduce gridlock and improve the flow of traffic for those getting on and off the highway at the intersection. The project began in 2020 and opened to the public on September 26, 2022.

If the interchange is received well by drivers, we may see more DDIs on Canadian roads in the future. For more automotive tips and news, check out our blog.