Car Reviews and Tips » What Do You Do about Rock Chips? 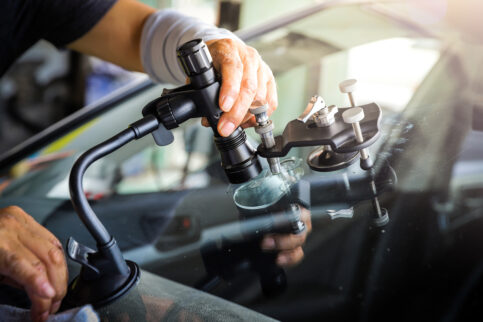 Getting a rock chip on your car can cause immediate anxiety because you’re worried you’ve hit something. After a moment of relief, you feel frustration, because you know that your window of time for repairing that rock chip is small before it spreads, and you obviously have better things to do. In this blog post, will discuss a few driving strategies that can help prevent you from getting rock chips in the 1st place, and will cover ways of repairing rock chips, two.

Knowing what to look for when you’re driving and doing your best to avoid it are the main ways you might avoid rock chips in the first place. Rock chips are typically flung out from under the wheels of other vehicles, especially large ones such as dump trucks and tractor trailers. These large trucks should have mud flaps on them to prevent rocks from flying, but the mud flaps could be damaged. Moreover, if a dump truck’s cover doesn’t fully close, debris could fly at you from above, too. If possible, avoid driving behind or at least near these large vehicles.

Also pay attention to where vehicles are coming from. Your chances of getting a rock chip increase if you end up behind a vehicle that has just come off a gravel road. So again, avoid driving behind them if possible.

When that rock hits the body of your car and chips your paint, get that chip repaired as quickly as possible. The longer you go without repairing it, the greater your chances of developing a rust problem, which will be far more expensive to fix than a simple paint touch-up job.

There are two schools of thought on repairing chips to your paint. One says that you should absolutely have a professional do it, and there are certainly professional detailers who will make that rock chip seem almost invisible. Another school says that with the proper touch-up paint from your dealer, you can do the job yourself.

It’s of course up to you which way you want to go, but just remember that you have to live with the results. If spending time throughout the day dabbing at a tiny spot on your car is not your idea of fun, then pay a professional to do it. You’ll be happier in the end.

Rock Chip Repair on Your Windshield

Rock chips on windshields are equally important to repair as soon as possible. The longer that chip is on your windshield, the greater the chances of it growing into a crack that will then require your entire windshield to be replaced. If the chip is at the side of your windshield, you’ll need to have it replaced either way, because the integrity of the whole windshield could be compromised.

After that darned rock chips your windshield, avoid water, heat, and dirt as much as possible. All three conditions can turn the chip into a crack. A strip of clearing packaging tape can be helpful, but only as a temporary measure.

Again, for small chips, there are kits to repair your windshield at home. If you’ve never done this before, though, and the chip is within the driver’s line of vision, we strongly recommend that you get a professional to repair the rock chip for you.

Whether you have your rock chip repaired at a garage or you do it yourself, take care of the damage as soon as possible. The longer you procrastinate, the worse it will get, and what might be a quick, inexpensive repair will turn into an expensive nightmare.