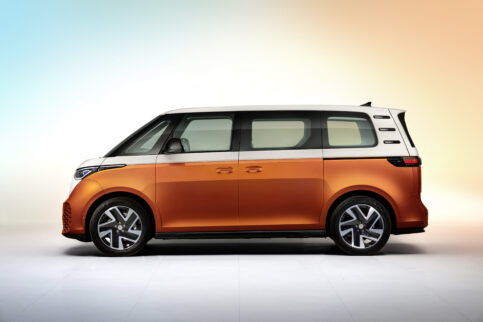 Wondering what’s on the horizon for the electric vehicle (EV) market? Check out the upcoming Volkswagen ID. Buzz!

Inspired by the growing trend toward EVs, Volkswagen is reimagining their iconic Type 2 Microbus (a.k.a. the VW Bus) into an all-electric model. Both retro and modern machinery fans are in for a treat with this new vehicle that combines classic aesthetics with futuristic technology.

When Will We See the VolksWagen ID. Buzz?

In 2017, Volkswagen revealed their plans for the new ID. Buzz. In March 2022, the final looks of two European models were shared. These particular models, standard-wheelbase passenger and standard-wheelbase cargo (aimed at commercial buyers), will be available for purchase in Europe this fall.

The rest of the world will have to wait a little longer to get behind the wheel of this electric microbus. For the North American market, a long-wheelbase passenger version of the ID. Buzz is expected to make it to showrooms in 2024, with an official debut and pre-orders taking place in 2023.

It’s unlikely the cargo model will make it to Canada, but we’ll keep you updated if anything changes. Volkswagen has also confirmed there’ll be a camper version of the ID. Buzz, but there’s no estimate on when that’ll be available.

In this post, we’ll focus on the expectations for the North American version of the long-wheelbase passenger model.

Since the ID. Buzz will run entirely on electricity, drivers will need a home charger or access to a nearby charging station to fuel up.

It’s unclear if all North American ID. Buzz models will have an 82kWh lithium-ion battery like their European counterparts or if there’ll be an option for a larger 111kWh battery, as well. Using Level 3 charging, Volkswagen claims the microbus’s 82kWh battery will go from five to 80 percent capacity in just 30 minutes.

In terms of range, it’s estimated the ID. Buzz will be able to travel 400 to 600 km (depending on the battery) before needing another charge. Range will also vary based on your driving habits, the weather, and road conditions.

Details on the long-wheelbase passenger model’s performance aren’t available yet, so we’ll use the European stats to get an idea of what we might see. The standard ID. Buzz motor will generate 201 horsepower and 229 lb.-ft. of torque. Using rear-wheel drive, it’ll be able to accelerate from 0 to 100 km/h in 10 seconds and will have a top speed of 145 km/h. An all-wheel drive configuration will also be available and may have slightly different capabilities.

The long-wheelbase passenger ID. Buzz will be equipped with aluminum-alloy wheels in sizes between 18 to 21 inches.

With organic-based paints, drivers will get to choose from a variety of energetic colours for their new ride, which offer a modern flair to the look of the original VW Bus. The V-shaped hood and angled LED headlights will give the new edition the iconic “smile” that the VW Bus is known for.

While the European version can hold five people, the North American passenger ID. Buzz will comfortably seat seven in a spacious cabin that’ll fit all you need for a retro-style road trip. The front seats will have adjustable armrests and tables on the back that fold out for the rear-seat passengers. Customizable features, including adjustable lighting and massaging front seats, will also be available to North American buyers.

To further support sustainable production, the interior of the electric microbus will be partially made from recycled materials to avoid the use of leather and other environmentally harmful materials.

What Will it Cost

There’s no official statement on the price tag of the long-wheelbase passenger ID. Buzz yet, but estimates currently start at $60,000 and go up to $85,000 CAD. Final pricing will depend on the particular motor, battery size, and other performance and style preferences of the driver.