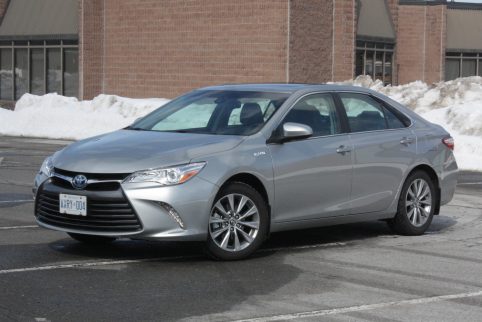 Mid-size family sedans and hybrid cars are among the fastest-fading segments in the auto industry. Sales of the former have fallen off in favour of crossovers and SUVs, while the latter represents yesterday’s technology as electric cars move into the mainstream.

Honda and Toyota produced the industry’s first hybrids – the Insight and Prius, respectively — more than 20 years ago. But those cars proved too showy for buyers who wanted hybrid efficiency in a subtle package. In response, Honda began making a hybrid version of the Accord in 2005, Toyota rolled out the Camry Hybrid in 2007, and Ford followed with the Fusion Hybrid in 2010.

By 2015, there were five hybrid family sedans in dealer showrooms. We looked up some specs to see how that quintet of five-year-old models stack up as used cars and ranked them according to NRCan’s combined fuel consumption estimates. The verdict? If you’re a used vehicle shopper focused on transportation rather than trendiness, a family sedan with hybrid propulsion could be an affordable and efficient choice.

Our list of the most efficient mid-size sedans begins with the Kia Optima, the Korean brand’s first-ever hybrid car. It used the same powertrain as the Hyundai Sonata Hybrid, but wrapped it in more restrained styling.

The fuel-efficient Optima Hybrid split the difference between the base gas-powered model and the uplevel turbo version in terms of price and performance. A six-speed automatic transmission makes the Optima an outlier in a class of car better known for continuously variable transmissions (CVT). Kia says the Optima Hybrid’s 2.4L engine and electric motor work together to make 199 hp. 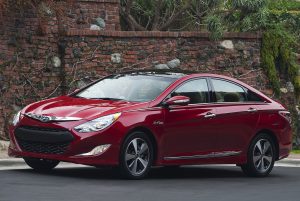 The 2015 model year was the last for Hyundai’s original Sonata hybrid, an extra-efficient version of one of the most stylish mid-size cars of its time.

There were no changes to the Sonata Hybrid for 2015, but this car did benefit from updates made in the previous two model years. Hyundai added an upscale Limited trim in 2013, along with a more powerful electric motor fed by a smaller, more energy-dense battery. In 2014, the Sonata Hybrid got a new infotainment system and a standard backup camera.

Like the Optima Hybrid, the Sonata Hybrid used a six-speed automatic transmission and added some performance compared with the base gas-powered Sonata. Hyundai says the Hybrid also makes 199 hp.

Toyota did a mid-cycle refresh on its Camry Hybrid mid-size sedan in 2015. While the changes were largely cosmetic, the car’s styling was different enough that it looked like a new generation.

The entry-level LE trim is the most efficient version of the 2015 Camry Hybrid at 5.7 L/100 km, but the 5.9 L/100 rating for the upscale XLE and SE trims is still good enough for fourth place on this list. All Camry Hybrid trims paired a 2.5L gas engine with an electric motor for 200 hp.

The Ford Fusion Hybrid has the snuggest interior of the cars on this list, but it trades that cabin space for the sportiest driving feel. We’d argue this is also the most handsome car of the group.

In 2015, Ford offered the Fusion Hybrid in S, SE, and Titanium trims. The S model was basic aside from a backup camera, dual-zone A/C, and power windows/mirrors/keyless entry. SE added hands-free keyless entry, adaptive cruise control, alloy wheels, and a power driver’s seat with lumbar adjustment. Titanium is the luxury model of the bunch with 18-inch wheels, heated front seats, a 12-speaker stereo, fog lights, navigation, and an auto-dimming driver’s side mirror.

This was the second generation of the Fusion Hybrid. Its revised 188-hp drivetrain was more efficient and boasted smoother transitions between its electric and hybrid drive modes. Ford also sold a plug-in hybrid version of the Fusion.

The Honda Accord Hybrid made a big leap in 2014, arriving with an all-new powertrain that, as you can see from its placement here, was one of the most efficient on the market. Those improvements were carried over into the 2015 model year.

Honda got a lot of things right with this generation of Accord. It felt light on its feet, and its hybrid system was among the best examples of its kind at the time. Here, total power output is 196 hp from a 2.0L engine and electric motor.