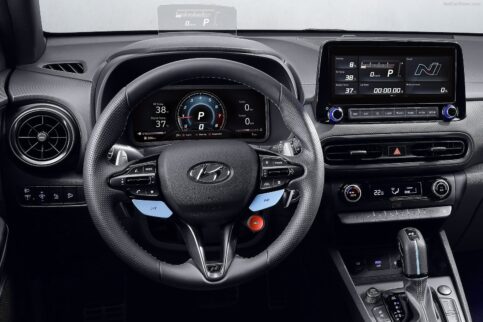 As some mainstream automakers phase out cars in favour of more popular utility models, they’re shifting their sporty vehicle focus onto crossovers aimed at enthusiastic drivers.

So far, Ford has been among the brands most keen to add on-road performance to their SUVs, with ST versions of the mid-sized Edge and Explorer.

Hyundai will be one of the next automakers to move into speedy SUV territory – and one of the first to do so with a small model at a mainstream price – when it adds the high-performance Kona N subcompact crossover to its lineup later this year.

While the Kona N will become one of the most affordable sporty small utilities you can buy, it won’t be the first of its kind. Here’s what you can expect from the Hyundai Kona N and a few of its closest competitors.

The 2022 Hyundai Kona N will be the Korean brand’s first entry in the mainstream sporty small crossover category when it arrives in Canada in 2021. It matches a 2.0L turbocharged four-cylinder engine making a maximum of 286 hp and 289 lb-ft of torque with an eight-speed dual-clutch transmission and an electronic limited-slip differential, but will stand out in the category for driving the front wheels only.

The Kona N is so named for Hyundai’s use of the Nurburgring racetrack in Germany for fine-tuning the suspension and handling.

Technically, the Kona N’s engine is rated for 276 hp, but a turbo overboost function called N Grin Shift adds 10 hp for short bursts of acceleration. Hyundai says the Kona N will accelerate from 0-100 km/h in 5.5 seconds and reach a top speed of 240 km/h. A launch control system will optimize the Kona N’s off-the-line acceleration, and the transmission will have track and power shift settings for performance driving.

Sitting atop the Mini Countryman subcompact SUV lineup is the JCW model, whose 2.0L turbo four-cylinder engine is the most powerful of this group with 301 hp and 331 lb-ft of torque. An eight-speed sport-tuned automatic transmission feeds that power to standard all-wheel drive.

Mini refreshed the Countryman’s styling for 2021 with new front and rear bumpers and taillights that illuminate in the pattern of the Union Jack.

Mazda’s CX-30 GT Turbo is the top trim of this subcompact crossover, which is closely related to the Mazda3 hatchback. It’s powered by a 2.5L turbo four-cylinder that makes 250 hp and 320 lb-ft on premium fuel, and a bit less on regular-grade gas. All-wheel drive is standard, as is a six-speed automatic transmission.

The CX-30 is a strong value among this group of sporty small crossovers when you consider its upscale styling and standard features. Exclusive to the GT trim (the only one available with the turbo engine) are a sunroof, LED signature lighting, adaptive auto-levelling headlights, auto-dimming rearview and driver’s side mirrors, a power tailgate, passive keyless entry, navigation, leather seating, and rear collision detection with automatic braking.

Those items are in addition to dual-zone A/C, a heated steering wheel, radar cruise control, forward collision avoidance, 18-inch wheels, a digital gauge display, and heated front seats, all of which are also standard in the lesser GS trim level.

The Ford Escape compact crossover is the largest vehicle in this comparison, but it’s less expensive than the Countryman. Its most potent engine is a 2.0L turbocharged four-cylinder that generates 250 hp and 280 lb-ft of torque and comes matched with an eight-speed automatic transmission. All-wheel drive is standard in all Escape models with the 2.0L engine.

Ford offers the 2.0L turbo in the Escape’s SEL and Titanium trim levels.