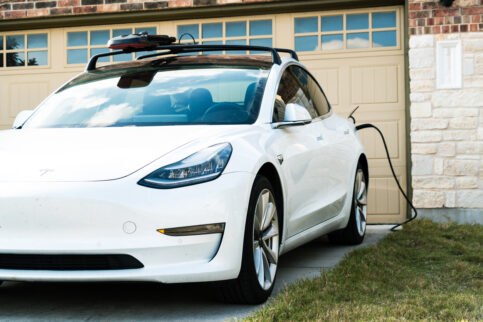 In a relatively short period of time, Tesla has made a huge impact on the auto industry with its range of high-performance electric vehicles. While its first offering was the late-2000s Tesla Roadster—a version of the Lotus Elise with an electric powertrain—the company has realized greater success with its more recent range of four-door vehicles, which includes the Model 3 and Model S sedans and the Model Y and Model X SUVs.

Tesla has made headlines for its semi-autonomous driving features and high-performance Plaid and Ludicrous Mode option packages that generate big power and wild acceleration. But no matter what it is about Tesla that piques your interest, making an informed purchase of one of its cars requires the same kind of research you should put into buying any vehicle. In this article, we’ll tell you what you look for when shopping for a used version of Tesla’s sedans, the compact Model 3 (introduced in 2018) and the mid-sized Model S, which has been on the market since 2013.

Tesla introduced the compact Model 3 in 2018, and by 2021 it was Canada’s best-selling electric vehicle, thanks to its combination of relatively affordable pricing, strong performance and driving range.

The Tesla Model 3 single-motor model has 258 hp and 317 lb-ft of torque. Dual-motor models with AWD are more powerful, but Tesla doesn’t publish full specs for the car other than to claim 0-100 km/h acceleration in about six seconds for Standard Range models, 4.5 seconds for Long Range cars, and about 3.5 seconds for versions with the optional Performance trim package.

In most versions of the Model 3, driving range starts around 385 km, but Tesla offered a special Canadian version with a 151-km range whose price qualified for Canada’s EV purchase rebate program. A Model 3 Long Range promises well over 500 km from a single charge of the car’s battery.

Tesla has replaced some Model 3 front upper suspension control arms to address owner complaints of a creaking noise heard when driving over bumps. You can read more about this common issue here and here.

If you hear a clunking sound during acceleration, this is apparently normal for the Model 3. Learn more about the phenomenon here.

If you’re new to EVs and to Tesla’s vehicles in particular, take care during your test drive to make sure you’ve shifted into the proper gear. Some Model 3 drivers say their cars have gone backwards when shifted into drive and vice versa, but others think those may be cases of user error, especially if the car’s “creep” function is disabled, which may, for example, allow the car to roll forward even if the car is in reverse. Here’s one discussion on the topic from September 2021 and another from June 2018.

If you can, take a used Model 3 to one of Tesla’s supercharger stations during your test drive and plug the car in to see if it makes the banging sound discussed here.

Finally, turn on the Model 3’s A/C. Some owners complain of a mold-and-vinegar-like odour coming from the vents.

Some early examples of the Model S promised driving range of 224 km to 426 km, depending on battery size and drivetrain options. By 2021, the Model S’s maximum range was a claimed 650 km. You can expect 0-100 km/h acceleration of about six seconds from an entry-level Model S, but the outrageous Plaid configuration will get there in 2.1 seconds, thanks to motors that put out more than 1,000 hp.

The Tesla Model S has electronic door handles that emerge from the doors as you approach the car with the key. Here, owners discuss the cause of—and a fix for—faulty handles that don’t let you open the door.

In this thread, you can read about the tendency of the Model S to randomly unlock and open on its own. Meanwhile, some Model S owners say they’ve experienced the frustration of a rear trunk that won’t open.

During your test drive, listen for the creaking sound described here, which can be traced to the panoramic glass roof. Also, inspect the windshield for stress fractures, as discussed here.

As a Model S driver, you’ll be relying on the car’s digital displays for driving information and various other functions, so make sure they work as they should in the car you’re test-driving. Here’s a discussion about the central display and another about the driver info screen.

Tesla was a pioneer in the use of over-the-air updates for its cars’ computerized control software, but some owners say they don’t like all the changes these updates bring.

No matter which Tesla sedan you’re shopping for, be careful when using the car’s driver assist features. Tesla insists its cars can practically drive themselves, thanks to a feature it calls Autopilot, and it offers a “summon” feature designed to bring the car to you from its parking spot. Take all of Tesla’s claims with a grain of salt: These driver assists are meant to support the driver and help avoid crashes, but as the driver, you remain primarily responsible for staying out of trouble.

Here’s one example of a Model S’s automatic braking system failing to do what Tesla claims, and here, the lane departure avoidance system almost caused a crash.

In this discussion, a Model 3’s Autopilot system failed to prevent a crash after its driver fell asleep, and in this thread, the driver describes having to take evasive action after Autopilot nearly drove the car into a semi truck.