Car Reviews and Tips » Rivian: The Electric Car Company Amazon and Ford Have Invested in 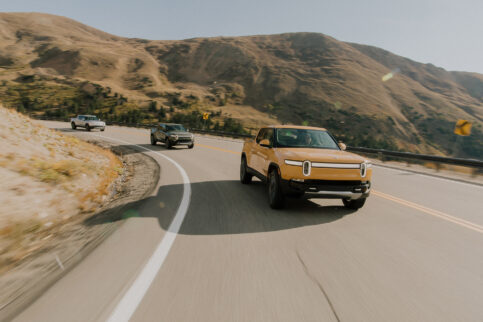 If you’re interested in electric vehicles (EVs), you may have heard of Rivian Automotive. In this post, we’ll look at this new EV player and how they’re shaping up in the automotive market.

What Is Rivian Automotive?

Rivian is an American EV startup looking to expand the market for electric vehicles, specifically with battery-powered pickup trucks and SUVs. Founded in 2009 by RJ Scaringe, Rivian operates on a “skateboard” platform. This means the company has produced a base structure with all the key components for an EV wich they can build future vehicles on or which other companies can adopt.

Rivian has attracted a fair bit of attention over the years after releasing two vehicles and securing investments from established brands like Amazon and Ford.

Rivian’s first vehicle is the R1T. This all-electric pickup truck has a 135-kWh battery with a range of 505 km on one charge. It comes equipped with AWD and automatic transmission and has a towing capacity of 10,000 lbs. It’s also capable of 835 horsepower and 908 lb.-ft of torque.

The current starting price for the R1T electric pickup truck is $86,250 CAD.

The R1S is Rivian’s all-electric SUV. The R1S has many of the same features and specs as the R1T. These include the same range estimate, drive modes, AWD, and panoramic roof. Both vehicles also have Driver+, a hands-free driving assistance feature that’ll automatically steer the car and adjust speed based on the driver’s commands.

Both the R1T and R1S are available for reservation. Rivian’s third vehicle, the R2 (another SUV), is expected to be available in 2025.

To produce their vehicles, Rivian relies on funding from several investors. The most notable of these is tech giant Amazon. As of March 2022, Amazon owned about 17.7% of Rivian after investing roughly $1.3 billion USD. Amazon’s founder, Jeff Bezos, entered this deal partly to obtain 100,000 electric delivery vans for his company’s use.

Another big investor is the multinational automobile manufacturer Ford Motor Company. After investing approximately $1.2 billion USD since 2019, Ford owned roughly 11.4% percent of Rivian. This percentage dropped just below 10% after Ford sold some of their Rivian shares in May 2022.

Despite winning several awards, including MotorTrend’s 2022 Truck of the Year, Rivian’s growth hasn’t been all smooth sailing.

After Rivian opened up to public investing in November 2021, Ford decided to sell 8 million of their shares in the company. For now, other investors seem to be hanging on to their shares, but they may read Ford’s move as a cause for concern.

Rivian is also struggling to ramp up production. A backlog of 90,0000 vehicles is being held up by issues with the battery supply chain and the ongoing semiconductor chip shortage. Until these problems are resolved and more funding secured, Rivian may see a decrease in orders as consumers face extensive wait times.

There’s also the influence of competition. Companies like Ford, General Motors, and Tesla are much more established in the automotive market, making it harder for Rivian to squeeze in at the table.

As a newer company, it’s difficult to predict how the future will look for Rivian Automotive. If they’re able to overcome obstacles with their supply chain, we may see many more Rivian vehicles on the road as they strive toward their goal of owning more than 10% of the global EV market share.

For more articles on EVs, automotive maintenance tips, and industry trends, check out our blog.