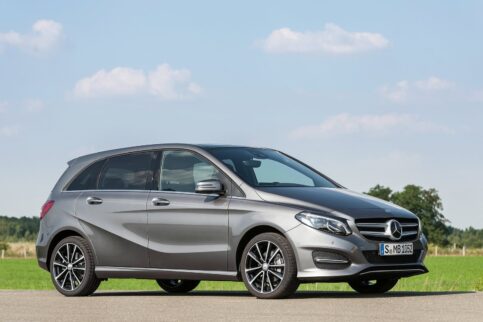 In the first two instalments in our high-versus-low series comparing similar mainstream and upscale vehicles, we pitted pairs of new vehicles against each other. This time, we’re switching our focus to the used-vehicle marketplace.

In this matchup, our “high” option is the Mercedes-Benz B-Class, a compact wagon that packaged some of the brand’s upscale touches in a practical shape.

On the low side is the second-generation Kia Rondo, a vehicle similar in size, shape and purpose but priced for a more budget-oriented audience. The Rondo stands out here for an optional third row that turned it into a seven-seater.

Coincidentally, neither this generation of the Rondo nor the B-Class were sold in the U.S. (though Mercedes-Benz USA sold a low-volume electric B-Class), but both were popular in overseas markets, where the Rondo was known as the Carens.

In this article, we’ll compare the performance and features offered in both the B-Class and Rondo and tell you what to watch for when shopping for used examples of both. We won’t discuss specifics about pricing here, because there are too many economic factors that affect resale values. However, we will offer some high-level insights in our conclusion.

The 2013 model year brought a second-generation B-Class to Mercedes showrooms wearing the B250 badge. All versions use a 2.0L turbocharged four-cylinder engine (208 hp/258 lb-ft of torque) and a seven-speed automatic transmission. The B250 was offered with front-wheel drive to start, but gained Benz’s 4Matic AWD as an option in 2015, along with refreshed styling.

Because the B-Class wasn’t sold in the U.S., it can be difficult to find reliability information specific to Canadian models, which sold in relatively small numbers. Some of the links we’ll share are from European sources, and others discuss issues with other Mercedes models that shared the B-Class’s drivetrain.

A few B-Class owners report a transmission that shifts only through its even- or odd-numbered gears, and may or may not shift into reverse. Some owners say that performing the reset procedure detailed here fixes the problem in some cases. Other owners said the fix was to replace the transmission.

Other transmission issues to watch for include rough shifting and a failure to respond when you press the gas pedal to accelerate. Most of these issues appear to be caused by faulty electronics.

Mercedes equipped the B250 with a fuel-saving engine start/stop function that shuts the engine down when you stop for brief periods, such as waiting at a red light. If the start/stop doesn’t work in your B250, the first thing to check is the system’s dedicated secondary battery, which is located in the front passenger footwell.

Here’s a discussion about water-pump failures in the 2.0L turbo engine used in the B-Class. This is not necessarily a widespread issue, but something worth watching for when shopping used.

Some owners complain Mercedes’s power-folding side mirrors don’t always work in cold weather. Another cold-weather complaint to be aware of is poor heater performance.

Some B250 models came with run-flat tires, which some owners say contribute to poor ride quality.

When test-driving, watch for any warnings related to the B-Class’s advanced safety features, some of which were options. These messages will show up in the gauge cluster. Some owners say the forward collision warning system is particularly prone to triggering error warnings.

During your drive, listen for common used-vehicle sounds like clunks or knocks caused by worn suspension and steering parts, and note any brake pedal vibrations. Then park the car and operate all of the B-Class’s infotainment and climate-control functions, watching for any delayed reactions or a touchscreen system that crashes or randomly restarts, which could point to software (easy to fix) or hardware (expensive to fix) faults.

Note that any fault in one of the B-Class’s electronic systems could be caused by a weak battery. If the battery is old (most have a date of manufacture marking) or a test reveals low voltage, replacing the battery is a relatively inexpensive way to start the diagnostic process.

Finally, look for a B-Class that comes with detailed service records, as its engine can be sensitive to sub-par maintenance. We also recommend spending the money for a pre-purchase inspection that could root out any incipient issues with the car you’re thinking of buying.

The second-generation Rondo is powered by a 2.0L four-cylinder engine that makes 164 hp and 156 lb-ft of torque. Most examples of the Rondo will have a six-speed automatic transmission, but Kia did offer a manual transmission in certain model years.

When the second-generation Rondo appeared in 2014, it could be optioned with niceties more commonly associated with luxury vehicles like the B-Class. Its EX Luxury trim level came with HID headlights, a ventilated driver’s seat, heated rear seats, panoramic sunroof, and front and rear parking proximity sensors. Entry-level L or LX trim (depending on model year) was standard with A/C, heated front seats and side mirrors, 16-inch steel wheels with covers, a front wiper de-icer, and Bluetooth.

Kia refreshed the Rondo’s styling in 2017.

The Rondo’s 2.0L engine (codenamed Nu by Kia and its Hyundai parent company) used direct fuel injection to improve fuel economy and power output. The negative side effect is that this type of fuel delivery system allows carbon deposits to accumulate on the engine’s intake valves, which can affect engine performance over time. Regular oil changes and using high-quality fuel will slow the process. Your local auto parts store sells products you can spray into the engine’s intake that claim to clean away carbon deposits.

When you start the Rondo’s engine, listen for a knocking or rattling sound caused by a condition called “piston slap.” It’s a known issue in the Nu engine that, if it affects the Rondo you test-drive, can make the car sound like a diesel when idling after a cold start. Note that you can drive a vehicle whose engine suffers from piston slap, but once it starts, it won’t go away. You can help prevent it by using high-quality engine oil.

Otherwise, watch for more general wear-and-tear issues in a used Rondo. If you feel any vibrations in the brake pedal when slowing down, the car may need new brake rotors and/or pads. Also listen for clunking or knocking sounds from the suspension or steering when driving over rough surfaces, which can indicate worn tie rods or ball joints.

The Rondo’s automatic transmission should shift smoothly enough that you may not notice it. Any abrupt or rough shifts could point to a transmission that has not been well-maintained.

With the car safely parked, operate all of the Rondo’s electrical accessories, including power windows and locks, sunroof and power seat controls (if equipped), and seat and steering wheel warmers. Turn on the air conditioning: It can be hard to tell if it’s working during a cold-weather test, but you should be able to hear the compressor engage, and in warm weather, the system should start blowing chilled air within seconds. Also test all of the system’s vent and temperature settings.

Finally, even if everything about a used Rondo checks out, get it checked over by a trusted mechanic. A pre-purchase inspection will cost between $100 and $200 and is money well-spent if it identifies any issues the seller does not disclose or is unaware of.

Just as these two vehicles catered to different types of buyers when they were new, the B-Class will be more expensive on the used market than the Rondo. However, that margin will probably be a bit narrower, due to a luxury model’s tendency to depreciate more quickly than one from a mainstream brand.

Also, while both vehicles are known for a few common durability issues, the B 250 will probably be a more expensive vehicle to maintain over the long term.

If performance matters to you, the Mercedes’s extra power and a chassis designed primarily for European roads will be more satisfying if you’re a driving enthusiast.

The B 250 also boasts the performance edge of optional AWD, while the Rondo’s available third-row seating adds practicality.

All else being equal, we will rarely recommend a used luxury model over a mainstream one, mostly because luxury models generally cost more to maintain. However, the B-Class’s relatively straightforward design makes it a safer choice than most upscale vehicles. If you like the idea of three-row seating in a compact vehicle, choose the Rondo; if the wintertime benefits of all-wheel drive are what you’re after, we wouldn’t hesitate to choose a well-cared-for B-Class with the 4Matic option.