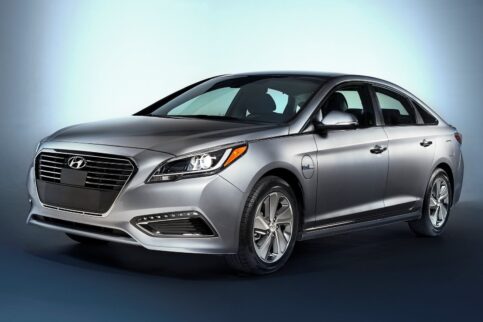 Electric vehicles are starting to gain serious traction in the marketplace, thanks to the recent high-profile introductions of crossovers like the Hyundai Ioniq 5, Kia EV6, and Ford Mustang Mach-E.

But all three of those brands got their start in the electric vehicle segment with plug-in hybrids (PHEVs), which combine limited electric range with a gas engine for covering longer distances. In this article, we’ll look at four PHEV family sedans: the Hyundai Sonata PHEV, the Kia Optima PHEV, and the Ford Fusion Energi, as well as the Honda Clarity Plug-In Hybrid, which was that brand’s first – and, so far, only – plug-in model for Canada.

Here’s what to watch for in these four popular brands’ PHEV four-doors.

The Honda Clarity Plug-In Hybrid was Honda’s first (and short-lived) experiment with PHEV vehicles in Canada. In the U.S., Honda also sold the same car in two fully electric versions, one a plug-in and the other powered by a hydrogen fuel cell. In the Clarity Plug-In Hybrid, power is from a 1.5L gas engine and an electric motor, which were connected to a continuously variable transmission. Honda promised 77 km of electric driving range on a full charge of the battery.

Honda put out a service bulletin to fix charging problems in 2018 and 2019 Clarity models.

Some Clarity owners complain of a loss of battery capacity as the car ages. Some loss of capacity is normal over time, but it should be minimal in a three- or four-year-old Clarity with 100,000 km or less on the odometer.

If a Clarity’s air conditioning doesn’t work, the fix may be covered by Honda Canada under an extended warranty for a faulty condenser, which is a radiator-like part that lives just behind the front bumper.

Ford redesigned its Fusion family car into a third generation in 2013, and added a plug-in hybrid option, dubbed Fusion Energi, alongside a conventional hybrid model and gas-only versions. The Fusion Energi derived 188 hp from its 2.0L gas engine and electric motor, and sent that power to the wheels through a continuously variable transmission. In early cars, Ford promised 32 km of electric driving range; in 2019, that improved to 42 km.

If you plug in a Fusion Energi to charge but the LED ring around the car’s plug starts to flash, that indicates a charging fault that can probably be fixed with a software update at a Ford service centre.

Some owners also say their Fusion Energi batteries lose charging capacity over time and won’t go as far on a charge as they did when the cars were new. If you have any doubts about the health of the battery in a car you’re looking at, you can get it tested at a Ford dealer.

If a Fusion Energi’s engine comes on while driving in electric mode, that could be to help prevent the battery from overheating. And if you do most of your day-to-day driving on battery power, the engine will come on once in a while in a maintenance mode.

The Hyundai Sonata PHEV and Kia Optima PHEV were the Hyundai Motor Group’s first plug-in hybrid models. Both cars use the same powertrain, consisting of a 2.0L four-cylinder gas engine and an electric motor that generate 202 hp and 276 lb-ft of torque, which goes to the front wheels through a six-speed automatic transmission. Electric driving range is 43 to 47 km, depending on model year.

Numerous Sonata PHEV and Optima PHEV owners have reported a “check hybrid system” warning that appears in the gauge cluster, and may also advise turning off the engine. Some drivers say warning lights for the electric parking brake and stability control systems came on at the same time.

One Optima PHEV owner who experienced this phenomenon says it only happens to them after long stretches of highway driving in gas-electric hybrid mode.

In some cases, this fault appears related to the electric pumps that circulate coolant through the engine (under the hood) and in the battery housing (at the rear of the car).

Two Sonata PHEV owners posting here report that their cars flashed the hybrid warning before the car shut down and wouldn’t restart.

And in this owner’s case, the warning came on and the engine ran even though the battery was fully charged. Then, after they returned home, parked in the garage, and plugged in the car to charge, the engine started up on its own, even though the driver is sure they turned the car off when they parked it. This appears to be an isolated incident, but it is concerning all the same.