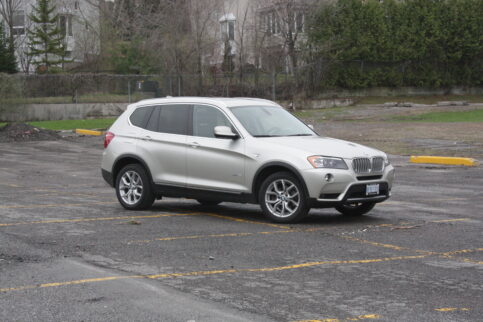 In this installment in our series of articles aimed at helping you buy a used luxury compact crossover, we’re looking at a handful of the earliest European models to join this now-popular segment.

BMW has one of the longest track records in this field, having introduced its X3 in 2004. For this article, though, we’re considering the second-generation model that arrived in 2011.

That coincided nicely with three other European brands’ inaugurations into the compact luxury SUV class: Audi introduced the Q5 in 2009, while Mercedes-Benz and Volvo both joined the fray in 2010 with their respective GLK-Class and XC60 models.

If you’re interested in owning one of the models that helped shape the market for small upscale SUVs, keep reading to learn what to keep in mind when shopping around.

The Q5’s older 2.0L turbo four-cylinder engine is known for timing chain tensioner failures that can cause internal damage, leading to an expensive repair. (https://www.audiworld.com/forums/q5-sq5-mki-8r-discussion-129/q5-timing-chain-failed-70k-2900657/)

Here’s a video showing how to inspect the tensioner. (https://humblemechanic.com/check-2-0t-tsi-timing-chain-tensioner/) Audi/Volkswagen redesigned the part to make it more reliable, so if your car has the original style part, you’d do well to have it replaced.

Some early Q5 models had a plastic engine-coolant pump that was prone to failure, so Audi designed a new metal pump as a replacement. (https://www.audiforum.ca/q5-q7-58/q5-water-pump-recall-59158/)

Here’s a discussion about power steering failures in later versions of the Q5. (https://www.audiworld.com/forums/q5-sq5-mkii-discussion-218/2019-q5-power-steering-failure-2972881/)

Before beginning your Q5 test drive, check the engine oil level. If it’s low, the engine may have worn piston rings that are commonly suspected in cases of excessive oil consumption. (https://www.audiworld.com/forums/q5-sq5-mki-8r-discussion-129/q5-oil-consumption-2959166/)

The Q5’s engines use direct fuel injection, which can cause carbon buildup on the intake valves and lead to poor performance. (https://www.audiworld.com/forums/q5-sq5-mki-8r-discussion-129/q5-fsi-carbon-build-up-2817781/)

A high-pressure fuel pump that serves the direct injection system is also a known problem in older Q5 models. (https://www.vwvortex.com/threads/cam-follower-failure-but-didnt-see-any-symptoms-please-respond.5025446/?id=5025446)

If you’re looking at an older X3 model, try to determine whether the engine’s water pump has been replaced. BMW uses electric pumps in these engines, and while they’re not especially troublesome, they are more expensive to replace than a more traditional belt-driven pump. (https://www.e90post.com/forums/showthread.php?t=657168)

If an X3 with a turbocharged engine (all models from 2013, or six-cylinder versions in 2011 and 2012) loses power in hard acceleration or cranks longer than normal when starting, its high-pressure fuel pump may be going bad. (https://www.e90post.com/forums/showthread.php?t=333519)

Timing-chain failures are a known issue with the X3’s 2.0L turbo four-cylinder engine. (https://x3.xbimmers.com/forums/showthread.php?t=1482736) BMW extended warranty coverage for some vehicles with that motor. (https://www.bimmerfest.com/threads/bmw-7-yr-70k-elw-on-n26-timing-chain-drive-chain-for-oil-pump-per-sib-11-03-07.1098641/) BMW redesigned the timing chain system in 2015 to address the problem. (https://bmwtuning.co/bmw-n20-common-problems/) The main telltale of a worn chain is a loud whining sound from the engine when it’s running.

Watch for oil leaks from where the engine valve cover meets the cylinder head and at the oil filter housing.

If you test-drive an X3 with a panoramic sunroof, listen for squeaks, rattles, and other noises when driving with the sunroof closed.

Operate the X3’s power tailgate (if the car you’re testing has one) several times to make sure it opens and closes properly. (https://x3.xbimmers.com/forums/showthread.php?t=1796481)

When the GLK-Class arrived as Mercedes-Benz’s first compact crossover model, its sole powertrain was a 3.5L V6 engine (268 hp/258 lb-ft) and a seven-speed transmission with standard AWD. In 2011, Benz added a rear-wheel drive option.

A GLK 350 with a rough idle and/or poor performance may have a fault in its engine’s complicated intake manifold, which will likely also turn on the “check engine” light. (https://tuningpro.co/4-common-mercedes-m272-engine-problems/)

Among the GLK 350’s most common engine issues is a failed thermostat. (https://tuningpro.co/4-common-mercedes-m272-engine-problems/) Symptoms include an engine that overheats or takes a long time to warm up, either of which could also trigger the “check engine” light.

In this discussion, you’ll read about the signs of a failing AWD transfer case in a GLK-Class. This is not an especially common problem, but it’s good to be aware of when buying an older version of this SUV. (https://mbworld.org/forums/glk-class-x204/722331-transfer-case-56k-miles.html)

The GLK 250 Bluetec diesel uses a urea injection system to control exhaust emissions. If the urea reservoir gets too low, the car will flash a warning telling you you’ll only be able to start the car 10 more times unless you refill the tank. Early on, when the GLK 250 went on sale as a 2014 model, some owners reported problems with the AdBlue emissions control system within weeks of taking their cars home from the dealer. (https://mbworld.org/forums/glk-class-x204/513207-2014-glk-250-bluetec-adblue-warning.html)

In a GLK with a power tailgate, make sure it works with no hesitation or strange noises. If the door stops and changes direction, that could be a sign of a mechanical or software issue. (https://mbworld.org/forums/glk-class-x204/310648-power-tailgate-problems.html)

When test-driving the newer GLC-Class, listen for squealing brakes, a common complaint from owners. And pay attention to the way the GLC’s suspension and tires handle rough pavement, as some drivers say they can feel vibrations caused by bumps that seem out of place in an upscale vehicle. (https://www.glcforums.com/threads/wheel-vibration-over-bumps.2418/)

You may also experience something called “crabbing,” a shuddering/clunking sound that happens when you make a very sharp turn in a GLC. The consensus seems to be that this is a normal by-product of the GLC’s suspension, steering, and tires when negotiating tight corners at low speeds. (https://www.glcforums.com/threads/mercedes-glc-clonking-and-juddering-on-near-full-steering-lock.3345/)

Here’s a discussion about software-related flaws with the GLC. (https://www.glcforums.com/threads/glc-software-issues.1937/) While complaints with the GLC’s electronics are not uncommon, few cars will exhibit exactly the same problems as another. When test-driving, we suggest operating all of the GLC’s secondary controls to make sure they work as designed, as just about everything in the car is controlled electronically. Also, if any system or feature activates unprompted during your test drive, that could be a sign to look at a different GLC.

Volvo entered the compact luxury crossover race in 2010 with the XC60. At its introduction, it could be had with a 3.2L inline-six-cylinder engine (235 hp/236 lb-ft) or a 3.0L turbo inline-six (281 hp/295 lb-ft). Both came with a six-speed transmission, and all but the base model came standard with AWD.

During your XC60 test drive, take the car through a high-pressure car wash and watch for leaks from around the windshield, a known issue with this Volvo crossover. (https://volvoforums.com/forum/volvo-xc60-51/leaking-front-windshield-2010-xc60-67995/)

If you test an XC60 in warm weather, turn on the A/C to see that it blows cold; numerous owners complain of failed air conditioning compressors.

Broken suspension springs are not uncommon, especially in older versions of the first-gen XC60. Note that you may not even be able to tell a spring is broken during your test drive, so a pre-purchase inspection is a good idea. (https://volvoforums.com/forum/volvo-xc60-51/2011-xc60-1-coil-spring-like-part-fell-down-91462/)

Sticky outside door handles are an issue on the XC60, and can cause the handle to get stuck in the open position. Lubricating the mechanism helps, but is often only a temporary solution. (https://www.swedespeed.com/threads/outer-door-handle-sticking.342377/?id=342377&s=62cc6d01e6d83a5870d04c8ebe961850)

If an XC60’s backup camera does not automatically come on when you shift into reverse, it may have been disabled in the car’s secondary controls menu. This discussion details how to turn it back on. (https://volvoforums.com/forum/volvo-xc60-51/camera-wont-come-reverse-83477/)