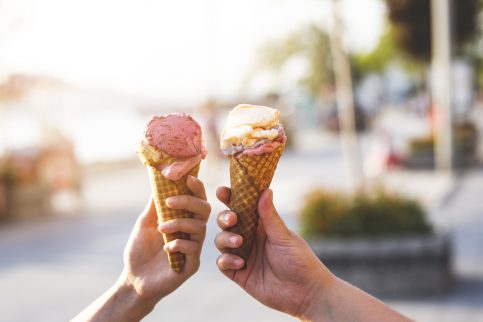 Who doesn’t know Kawartha Dairy? This company has been under family management since its founding over 80 years ago and remains Canadian owned. It was founded in Bobcaygeon, Ontario, where it is still headquartered today.

Founded by Jack and Ila Crowe in 1937, Kawartha Dairy began as a three-room dairy, with the cold storage area cooled by ice cut from the lake. Milk in the early days was delivered to the dairy by wagons in the summer and sleigh in the winter. Today, the dairy operates nine retail locations and delivers ice cream to numerous wholesale customers. You can likely find it in your local grocery store. 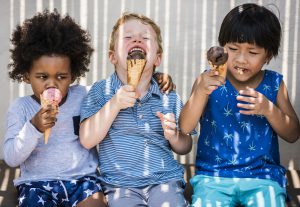 A mompreneur success story: Chef Shelley Westgarth gave birth to twins, wanted a food-passion-related job that would help her balance family and work, and shortly after her twins entered school, she began Belly Ice Cream in Huntsville. “Belly” doesn’t come from the belly you’ll develop by enjoying this all-natural ice cream. It comes from Westgarth’s twin-carrying belly she had when she still worked as a chef.

Belly Ice Cream’s claim to fame is its all-natural ingredients and that it’s made fresh when ordered. So you’re not eating last winter’s stock. Moreover, not only is the ice cream handmade, but so are other components: marshmallows, caramel, fudge, and even the brownies.

Headquartered in St. Thomas, Shaw’s Ice Cream has been around for over 70 years. They use fresh 100% Canadian cream to create more flavours than I can count, including two no-sugar-added ones: Black Sweet Cherry and Maple Walnut, which are both lactose free and sweetened with maltitol and sucralose (known under the brand name Splenda).

Carl Shaw, the founder of Shaw’s Ice Cream, started in the dairy business in 1933. Through old-fashioned tradition of trust with his creditors, he established Shaw’s in 1948. A series of sales took place throughout the 20th century and in 2001, the McLaughlin sisters purchased Shaw’s Ice Cream.

If you’re headed to Port Stanley, stop by the Shaw’s Dairy Bar at the ice cream plant on Highway 4 South in St. Thomas.

I remember my grandmother buying a box of Chapman’s, unique because it wasn’t a typical ice cream container, and scooping the vanilla flavour into my bowl.

In 2009, a disaster at Chapman’s made the news: a spark from a welding repair ignited the century-plus old wooden creamery building that had been the company’s home since its founding. Thanks to providence, stock in a nearby storage facility, and insurance, the company barely missed a beat and began producing ice cream in seven weeks without interrupting any employee’s pay.

Perhaps even more remarkable, though, is this: The fire had destroyed all the family’s recipes, but the mix makers helped write them down again so customers could enjoy the same flavours they had grown up with.

If you’re taking a trip to the Niagara region and need to grab some ice cream, look no farther than Avondale Dairy Bar. They make their ice cream by hand on premise, and it’s fresh every day. This scoops shop was founded in 1955 but its roots go back a little further, to 1931 when the Stewart family founded Avondale Dairy.

I’d like to be a judge in those competitions.

The Avondale Dairy Bar is located at 461 Stewart Rd. in Niagara-on-the-Lake.