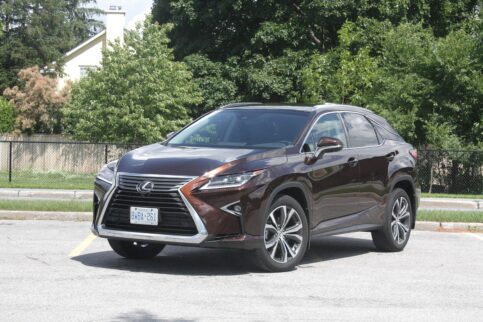 Despite their long history in the sector, Japanese automakers have less experience building upscale vehicles than European or American manufacturers. However, that hasn’t stopped Japan’s car companies from staking their claim in the profitable luxury vehicle segments.

Honda established its Acura brand in 1986, while Nissan and Toyota rolled out their Infiniti and Lexus lineups in 1989. Since then, all three have proven they can go head-to-head with their German and American competition, especially in the mid-size crossover segments.

In this article, we look at what you can expect from used versions of three upscale Japanese mid-size crossovers with three rows of seats: the Acura MDX, Infiniti QX60, and Lexus RX.

In 2014, Acura rolled out the third generation of its MDX mid-size SUV. It was a little bigger than before to create more space for third-row seating carried over from the previous generation. Standard power is from a gas V6. In 2017, Acura updated the MDX’s styling and added a hybrid option.

In 2016, Acura replaced the MDX’s six-speed transmission with a nine-speed automatic. Many owners complain of poor shift quality from the nine-speed, especially after a cold start; Acura’s fix was to reprogram its computer control software.

The older six-speed is known for a “juddering” sensation caused by a fault with the torque converter.

Acura designed the MDX’s engine to shut down at stoplights to save fuel, but some owners say it doesn’t always – or ever – work.

When driving, listen for excessive noise from the rear suspension – a common complaint among MDX drivers.

Some MDX owners say the rain-sensing wiper function in their vehicles works sporadically. If you do your test drive on a rainy day, try the wipers out in automatic mode to see how they manage.

The 2013 Infiniti JX35 was the brand’s first mid-size crossover model with three rows of seats. In 2014, Infiniti renamed the JX35 as the QX60, and added a four-cylinder hybrid powertrain as an option to the standard gas V6. In 2016, Infiniti refreshed the QX60’s styling, and the hybrid went away after 2017.

When test-driving a JX35 or QX60, pay attention for a shuddering sensation from the continuously variable transmission (CVT). A CVT should shift very smoothly, so any jerkiness or shudders felt as you drive could indicate a mechanical or software problem. Some owners also say Infiniti’s transmission seems reluctant to downshift for added power when driving uphill.

Some owners say the QX60’s A/C fan makes annoying noises, while others complain of poor heat output. The QX60 comes standard with an automatic climate control system; run it through all its settings to check if it functions as it should.

Most used QX60 models you find in Ontario will have AWD, though it was optional before 2016. When testing an AWD QX60, pay attention for strange noises and shuddering sensations when making tight turns and accelerating through corners, especially on dry pavement. Also, have a mechanic look for transfer case fluid leaks. A low fluid level could cause those performance issues.

The QX60 came standard with a power tailgate. Open and close it using the button on the dash, the controls at the tailgate itself, and the key fob. If the door stops partway and reverses, the latch may need to be adjusted, or the electronic control module reset.

Lexus introduced its fourth-generation RX mid-size luxury crossover as a 2016 model. It was the most dramatic-looking version yet, its bold styling contrasting with this SUV’s relaxed driving feel. Buyers had the option of the RX 350’s gas V6 engine or the hybrid RX 450h’s more-efficient combination of V6 plus electric motors. Lexus added a three-row seating option in 2018 and refreshed the RX’s styling in 2020.

The 2016 RX was the first to come standard with an eight-speed transmission. Some RX drivers say they’ve experienced hesitation and surging on acceleration they think is related to the eight-speed. In 2017, Lexus issued a service bulletin to update the transmission’s software. (https://www.clublexus.com/forums/rx-4th-gen-2016-present/808183-hesitation-problem-at-various-speeds-tsb-info-post-159-a-11.html)

Lexus recalled the RX in early 2020 to replace fuel pumps that could fail. If you buy a used RX, check to see if yours was part of the recall campaign and, if so, that the repair has been completed. If not, Lexus will pay all costs to do the fix.

Before or after your test drive, pull up the front floor mats and inspect the carpet underneath for dampness. Some owners report water leaks into the cabin caused by blockages in the drains meant to direct water away from the sunroof opening.

Here’s a discussion about rear suspension noise. Fixing this may be as simple as having a technician lubricate suspension components. However, Lexus issued a service bulletin that recommends replacing the rear control arms. This work should not be prohibitively expensive, but it will cost a few bucks if you decide to do it.

Some RX drivers say their cars make a “gurgling” sound when the air conditioner is running. This does not seem to affect the A/C’s performance, but some owners find the noise annoying.

If you’re looking at an RX with the optional panoramic sunroof, operate it several times to ensure it works smoothly and quietly. A few owners have reported quality problems with the panoramic roof. In one case, a pane of glass flew off the car at highway speeds, but most problems will be comparatively very minor in nature.

Some owners say they’re disappointed with the performance of their cars’ heated seats and steering wheel, while others seem satisfied. If you’re test-driving on a cold day, try both features to see if they provide the comfort you expect.