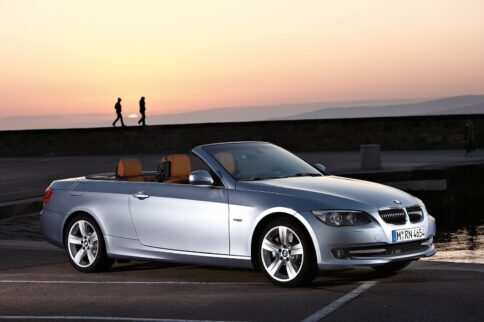 Convertibles have long been objects of automotive desire, and in the 2000s automakers saw an opportunity to combine the romance of open-top driving with the refinement of a fixed roof in convertibles with folding hardtops.

The retractable hardtop trend was not limited to any one country’s auto industry. The segment was dominated by domestic and European models, but Japanese brands got into the game as well.

In this article, we’re focusing on used hardtop convertibles with seating for four; that leaves out a handful of two-seat roadster models, but we’ll take a look at those cars in a later article.

For now, if you like the idea of a used car that combines the best parts of a coupe and a convertible with enough space to bring friends along for the ride, read on to learn what to look for when shopping around.

BMW redesigned its 3 Series convertible in 2007, switching to a folding hardtop to replace the previous model’s cloth roof. A 328i model used a 3.0L six-cylinder engine with 230 hp, and the 335i got a turbocharged 3.0L with 300 hp. Six-speed manual and automatic transmissions were offered with both engines. BMW attaches code names to all of its designs; this generation of 3 Series convertible was called the E93.

Here’s some information about fuel-pump failures in the turbocharged engine in the 335i convertible, a well-known problem in these cars. (https://www.e90post.com/forums/showthread.php?t=333519)

Some owners have complained of engine oil consumption in their 3 Series convertibles. (https://www.e90post.com/forums/showthread.php?t=1590929)

This thread gives a great overview of an aging E93’s common issues. (https://www.e90post.com/forums/showthread.php?t=1517476) Among the items worth noting are the electric water pump and thermostat; leaky valve cover, oil pan and oil filter gaskets; accessory belt tensioner; and, in turbocharged 335i models, a turbo waste gate rattle for which there’s a cheap-and-easy temporary fix, but the only true solution is to replace the turbo at much greater expense.

In this discussion, an E93 owner documents their efforts to fix a convertible roof that stopped moving halfway and wouldn’t respond to the controls. (https://www.e90post.com/forums/showthread.php?t=528405) In the case of this and another E93 owner, the problem was related to the computer module that controls the roof’s operation.

In 2008, a new Chrysler Sebring convertible joined the brand’s lineup with a folding hard roof. Powertrain choices included a 2.4L four-cylinder engine (173 hp), and 2.7L and 3.5L V6s with 189 and 235 hp, respectively. The four-cylinder and smaller V6 got a four-speed automatic transmission, and the 3.5L engine used a six-speed.

In cars with the 2.7L engine, watch for coolant leaks from the water pump. It can leak externally, but more concerning is the possibility of coolant contaminating the engine oil.

If the oil-pressure light flickers, a common cause is an electrical sensor that overheats because of its position near the exhaust. Chrysler issued a service bulletin to relocate the sensor to address this flaw.

There’s a cable linkage between the shift lever and the transmission that can slip out of a clip, which allows the cable to rest against the transmission. That can cause the cable’s rubber sheath to melt and stick to the hot transmission, with the result that the shifter gets stuck.

Watch for leaks from the hoses that carry transmission fluid to the cooler at the front of the car. (https://sebringclub.net/62-te-oil-leaking-t36212.html)

Lexus introduced the convertible version of its IS compact sport sedan in 2010, marking the first time it offered the car in a two-door body style.

Here, IS C owners discuss a convertible top that won’t close all the way on the first try after it has been left open for an extended period. (https://www.my.is/threads/roof-operation-suspended.397410/) A few IS C owners have posted in forums about hardtops that won’t move at all from the open position, accompanied by a fault warning in the instrument cluster. In this case, the issue was a faulty switch in the roof mechanism. (https://www.clublexus.com/forums/is-c/816789-convertible-top-problem.html)

Complaints about rattles and squeaks from the hardtop appear to be common, but not universal, among IS C owners. (https://www.my.is/threads/rattles-and-squeaks.400682/)

The IS 250’s engine uses direct fuel injection; over time, this can allow carbon to build up on the intake valves, which can eventually cause performance problems. (https://www.clublexus.com/forums/is-2nd-gen-2006-2013/484055-lexus-is250-4gr-fse-engine-carbon-build-up-merged-threads.html). The 3.5L uses both direct and port-style injection, and those port injectors prevent this problem, making the larger engine less troublesome in the long run.

Some IS 350 owners complain of oil consumption, which you can read about here (https://us.lexusownersclub.com/forums/topic/74912-2006-is-350-burning-oil-about-a-quart-every-1000-miles-beware/) and here (https://us.lexusownersclub.com/forums/topic/74068-is-350-burning-oil-is-that-possible/). Our advice? Check the engine oil before you begin your test drive; if it’s low, be suspicious of either an oil-burning problem or substandard maintenance.

Pontiac added a convertible to its G6 lineup in 2006, the third version of a car that also came in sedan and coupe forms. Power was from 3.5L and 3.9L V6 engines (201 and 227 hp) and a four-speed automatic transmission.

The G6 is known for a steering clunk, for which GM issued a service bulletin. (https://www.g6performance.com/forum/archive/index.php/t-3924.html)

In cars with the 3.5- and 3.9-litre V6 engines, watch for coolant leaks. The main source of trouble is a “crossover” tube that carries coolant between the two cylinder heads; the gaskets between the tube and the heads are prone to leaking. Read a bit about it here and here (https://www.g6ownersclub.com/forum/showthread.php?t=12611 and https://www.autoserviceprofessional.com/article/91742/coolant-crossover-leak ), and click here for a cutaway drawing that shows the crossover tube. (https://docs.google.com/file/d/0B818hrBYPkZBRnQxTHRaMC1tc0k/edit?usp=sharing)

The G6 was, at the time, one of the most retractable hardtops. It was plagued with reliability problems even before it went into production. (https://jalopnik.com/122161/pontiac-g6-convertible-top-trouble ) We can’t say that the top has proven particularly fragile, but some owners report relatively minor problems, like this (https://www.g6ownersclub.com/forum/showthread.php?t=6743&highlight=convertible ).

The Eos joined Volkswagen’s lineup in 2007 as a folding hardtop convertible based on the same platform as the Golf hatchback. Through its nine-year run, the sole engine was a 2.0L turbocharged four-cylinder similar to that in the GTI hot hatch; transmission choices were a six-speed manual and a six-speed dual-clutch automatic.

Some Eos owners complain of a clunking sound from the car’s C-pillars. (https://www.vweosclub.com/threads/the-dreaded-clunk-in-the-roof.2112/)

The second-generation C70 is one of the more interesting cars Volvo made when it was affiliated with the Ford Motor Company. While the original C70 came in coupe and soft-top convertible forms, Volvo built the later version only as a folding-hardtop convertible.

The C70’s engine is a turbocharged 2.5L five-cylinder making between 218 hp and 250 hp. Torque figures vary, too, but no matter the amount, this engine feels strong in city driving. Through 2010, a six-speed manual transmission was standard and a five-speed automatic the option. From 2011 onward, all C70s came with the automatic. Regardless of model year and transmission, all C70s were front-wheel drivers.

When operating the C70’s roof during your test drive, listen for clicking or popping sounds as it moves. Also, make sure the top secures itself both when you stow it and raise it. Some owners say the top will stop just before it closes, and won’t latch until it has been fully opened and then closed again. (https://volvoforums.com/forum/volvo-c70-14/2008-c70-hardtop-makes-clicking-noise-misses-locking-into-place-occasion-71381/)

Apparently, it’s normal for the C70’s roof panels to creak while driving over rough roads when the top is up. (https://volvoforums.com/forum/volvo-c70-14/if-your-c70-hardtop-has-roof-rattles-clunks-42333/)

When shopping for a used C70, inspect the outer surfaces of the roof panels for wear caused by contact with the headliner. (https://volvoforums.com/forum/volvo-c70-14/2011-c70-headliner-marking-roof-panel-72771/)

Here’s a discussion about drooping headliners in the C70’s roof panels. (https://volvoforums.com/forum/volvo-c70-14/c70-hardtop-convertible-drooping-fallen-rear-headliner-71666/)

The C70’s engine uses a rubber timing belt to drive the camshaft and intake and exhaust valves. This is a maintenance item that has to be replaced periodically. The recommended interval will be noted in the owner’s manual, but if the seller can’t tell you when it was last replaced, it’s probably time to have it done. A neglected timing belt can break and cause serious engine damage.

Before you begin your test drive, start the engine and let it idle until it’s warmed up. Then walk around back and look for white or blue smoke from the exhaust, which can indicate leaking oil seals in the turbocharger. In these cars, the turbo is built into the exhaust manifold, so replacing it can be an expensive job.

While test-driving, watch for erratic shifting from the C70’s five-speed automatic transmission. You’ll find a few specific things to look for in this discussion about a Volvo XC70 with the same transmission. (https://www.swedespeed.com/threads/aw-55-50-shifting-issues-valve-body-replacement.637265/)

What should you know about a folding hard-top convertible roof?

These rigid drop tops usually consist of two or three panels that fold up in a mechanical dance to stow away under the trunk lid. In most cases, the roof mechanism takes up a lot of cargo space, but the best examples reserve a usable amount of room for a few groceries or a couple of overnight bags.

A folding hard roof is a complicated piece of machinery that, depending on the car in question, is operated by a combination of electric motors and/or hydraulic pumps. Like any convertible, these hardtops are designed to seal against wind and water at the windshield, around the doors, and where the roof meets the body ahead of the trunk. However, the hard panels also seal against each other, so any misalignment can cause water leaks.

When test-driving a folding hardtop convertible, put the roof up and take it through a car wash to look for leaks. Then get on the highway to listen for wind noise that could indicate a misaligned panel.

Find a place to park and, with the engine running, run the roof mechanism through its full range of motion several times. It should move without hesitating or making any popping, clunking, creaking or groaning sounds.

Modern convertibles have a variety of sensors that monitor moving parts to make sure the top is sealed when it’s up and properly stowed when it’s down. These sensors and the computer they’re connected to can be difficult to diagnose and expensive to replace. Mechanical problems are also possible, of course, and won’t be cheap to fix either. In most cases, if there’s a problem with the roof, it will stop moving and the car will issue audible and or/visual warnings to let you know something’s wrong.

In most modern convertibles, the door glass should drop about an inch when you open the door, and then snug up against the weatherstripping when you close it. The technical term for this is “indexing,” and it helps ensure a weathertight seal. If this doesn’t happen on the car you’re test-driving, it could point to an issue with the car’s sensors and/or computer controls, as mentioned above.

As always, we recommend you get any used car checked by a mechanic you trust before buying. That’s especially important with a convertible, and even more of a good idea when you add a folding hardtop to the equation.

If you experience any roof-related problems during your test drive, think twice about buying the car in question, unless a mechanic you trust assures you of a cheap and easy fix.